Fellow artist, friend and all around awesome guy, Ben Thompson (not to be confused with the author of the same name), saved me the horror of having to conjure anything too deep to say today (and saved you from having to read it) by being generous enough to generate an animated gif of Valentine.  Unsolicited, Ben sent along the fruit of his efforts via electronic mail just moments after I'd first mentioned the idea, yesterday. Were I a wealthy man, I'd provide Ben with some recompense for his efforts.  A small yacht, perhaps.  As I am not a wealthy man, I can only give him my profuse thanks and offer to buy him a drink the next time we meet, which I'm hoping isn't too far down the road.

So, there you go.  Thanks again, Ben!
1 comments
Email ThisBlogThis!Share to TwitterShare to FacebookShare to Pinterest
Labels: Illustration, Oils, Process, Sketches, Valentine, Videos

Here's the final image.  It took a while to dry, almost a full day to scan, retouch, and color correct, and at the moment seems like it took forever to complete.  But, it's done, and I'm well into the next couple jobs I have due.  This painting will be one of several pieces making their debut at Spectrum Live in May, and will hopefully help fill the walls nicely.  Hopefully. 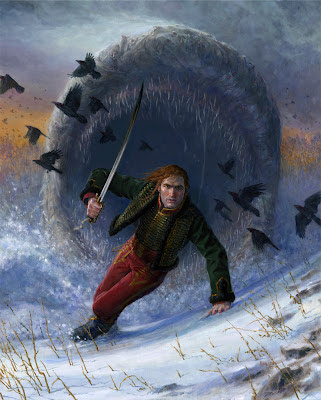 So, as usual it's oil on paper on hardboard.  It measures 16" x 20" and palette-wise is one of the lighter pieces I've worked on in quite some time.  Can't exactly say that about its tone, though.

What would be cool is if I went back and created an animated gif of the painting coming together.  Yeah — all twelve steps in one image.  That would be sweet.  But right now that's just not going to happen.  I've got too much on my plate.  Instead, you'll just have to flip through the dozen previous posts really quickly and pretend.  Sorry.

You know, not having this piece to talk about will be a bit of a letdown now.  I'm going to have to dig a bit deeper than I've had to the last couple weeks to provide content.  Hopefully whatever ends up filling the void will be worthwhile content, but who's to say?

Anyway, I should get back to work.  I've still got 9 out of 11 pieces to go, all due at the end of the month, and as much as I'd like them to, they won't finish themselves... which is why I need a helper monkey.  Unfortunately, said monkey would probably just throw stuff around and make a mess.  I doubt a whole lot would actually get done as the monkey would obviously be hurling things about while I chased after it, cleaning up as I went.  No painting or drawing getting done there.  So I guess a helper monkey is a bad idea.  At the very least, it's certain that I'd have virtually no time to babble on like this.  I mean, even if it worked out just think how long it would take to train the monkey.  I'm sure it would come partially trained, but I'd have to teach it the nuances of how I work, and such.  Even were the monkey a patient one, I'm sure I'd stretch that patience to its very limits (as I often due with humans) and I'm pretty sure that that would still end with me wiping the walls and scrubbing the carpet.  So yeah.  I need to just accept the helper monkey thing as being ill advised and move forward with getting the work done, myself.