Rather than just re-post verbatim my contribution to the Original Magic Art website's blog on the creation of Dragonlord Silumgar, I decided to add a running commentary. If you'd like to read it without the additional notes, please feel free to check the post out as it was first published over there: link. Otherwise, read on. Or skip to the pictures. It's entirely up to you.

Take it away, me:

Though Dragonlord Silumgar makes his appearance in "Dragons of Tarkir," his creation came about in August of 2013 while I was working on the concept art team that hammered out the visuals for Fate Reforged. (Also involved on the concept art team were Mark Winters and Sam Burley — both of whom have since been brought on as full-time members of Magic's creative team.)

While there was a lot of fine tuning involved, one thing remained consistent: he was always a big, fat dragon. (Though Silumgar's weight did fluctuate a tad during development, and I believe he ended up being a little heavier than I initially conceived him.)

Only later while working on the concept art team for "Dragons of Tarkir" was it made clear to me that the more grotesque version of Silumgar would be the “after” image and was therefore asked to retcon his more svelte “before” form. (I was always a little worried that he'd end up feeling a little generic as a thinner dragon, but it was clear that the transition was necessary to help hammer home the passage of time between the two sets.)

When I was given the assignment to paint Silumgar, the Drifting Death, it was under the condition that I agree to paint him again in his older form. After much arm-twisting (or rather none), I relented.

If memory serves, the art order was simple: Wizards was looking for an image of Tarkir’s Jabba the Hutt (This is one of the rare times that I seem to have deleted my art order, and I can't recall if there was an explicit reference to Jabba or if it was heavily implied. The reference itself might actually be something that I retained from one of the conversations we had with Magic's creative team during his design.)

They wanted to see Silumgar atop an elaborate platform that was visually inspired by the throne of Tasigur, the Golden Fang. He would be bloated and drooling, surrounded by his vast wealth and decorated with lavish jewelry. So clearly there was to be a touch of Smaug in there, as well.

I quickly went to work collecting reference of sunning lizards and lounging cats (not to mention piles of gold treasure). I was looking for a pose that gave the beast a bit of an old Hollywood mafia don vibe — stately and perhaps a bit refined, but still dangerous. So maybe Don Corleone visually, with the a bit of Tony Soprano thrown in. Or something. (Thinking this way can be hit and miss as my frames of reference don't always translate, and the audience is bound to make connections that make more sense to them. Truthfully, though, what I really wished I could have referenced was Hedonismbot from Futurama, but I reigned myself in to prevent things from getting too ridiculous.)

Point being that the attitude was going to be the major selling point and his gesture was going to be key to that. In the end, despite the fact that his design is more influenced by lizards and snakes, his pose became much more lion-like.


The thing about this piece is that in many respects it was the companion piece to the original Silumgar illustration. (Well, it was in my head, anyway.) The difficult thing was to find ways of tying them together visually. However, I didn’t necessarily want to slavishly follow a path that would have me rehashing a lot about the first piece. In the end, I went about linking the two more through palette choices than anything, but it was something that nagged at me early on (and still does).

Anyway, Wizards liked what they saw and gave me the go ahead, and so I took it to paint. (By "liked what they saw," naturally I mean that I got a generic-looking email with the art identification number, followed by a colon and then the word "approved" in all caps.)

When painting a piece, I wish I could tell you that I have a set formula. I know a lot of folks that work their way from background to foreground, while others work up the entire piece more holistically. Personally, I've done both (and various other methods throughout my career), but I’m not disciplined enough to have one set way of working. (Some pieces feel like they require specific approaches, and that keeps things interesting to me. It's also a bit dangerous as sometimes I dig a hole that I have to get myself out of and deadlines don't move just because I'm in way over my head. So, my nights and weekends can often be victims of my attempts to try something new.)

Mostly, each morning I start with whatever I feel like working on. (This is mostly because starting my work day is typically the biggest hurdle of the day. Fighting past the low motivation or fear of failure that causes my procrastination must be done, however. Happily, once I'm past this hump, I'll paint until I'm exhausted. Weirdly this has not changed even after more than fifteen years as an illustrator. I've just gotten a lot better and tricking myself into beginning the work day.) In this case, I started with Silumgar himself and circled out from there. That’s not to say that I neglected everything else each day, mind you. I spent a quite a bit of time blocking other stuff in, but Silumgar was the focus and the selling point, so he got the most attention until I felt I’d gotten him right. The rest fell into place around him (except the piles of gold which was a day of entranced tedium).

When I designed Silumgar in 2013, someone else on the design team mentioned that perhaps he should be wearing jewelry. Very quickly, I knocked in a some bracelets and a necklace made of skulls and the dangling body of one of his victims. This choice was largely based on what I thought would amuse Magic Art Director Jeremy Jarvis. (I've known him a long time and he's forced me to watch a lot of bad horror movies. And also some good ones. But mostly bad ones.)

It turned out that I was right and the necklace stayed in.

At the time, the remains dangling from the beast’s neck were not meant to be anyone in particular. He was naught but a placeholder. Eventually, however, it was agreed that perhaps this would be a good opportunity to make a nod to Tasigur, and so it was that the poor fellow ended up becoming the adornment in question. (If Silumgar is Jabba, Tasigur is the darkest spin on slave Leia that ever was.)

Sadly, Dragonlord Silumgar would be the last image I painted in the world of Tarkir.

Having been fortunate enough to be part of several concept pushes for Magic, I feel some degree of attachment to those worlds I helped create. This attachment sits outside of the usual love/hate that many of my fellow illustrators have for various blocks (just ask any illustrator that got to play in the world of Mirrodin, for example, and you’ll get wildly divergent opinions (personally, I loved it)). Seeing the pieces others create based on things I had a hand in designing is extremely special and I love seeing the world unfold in a more fully realized form (Especially when my fellow artists extrapolate from the original designs and manage to improve on them, which results in awe at the better design combined with a weird sense self-loathing for failing to have thought of any of it myself.)

I don’t know about anyone else, but I could easily have done another set’s worth of images in this world. I’d love to have gotten a chance to visit with the clans I helped design yet never got a chance to illustrate. (Though I confess that I had more opportunities to paint things I helped design this go around than during Innistrad.) But as the world of Magic turns, it was time to move on. One never knows, however. (Seriously, don't bug me, I don't know.) There may be an opportunity down the road. For now, I just have to be content with diving into the next world. 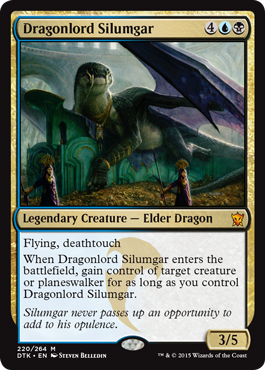