Basic lands tend to be pretty simple, straightforward processes for me. There aren't characters to live up to, there very rarely are strict designs to imitate, and rarer still is a ton of back and forth between me and the fine folks at Wizards. The swamp I did for Amonkhet kept that streak going.

The art description asked for a desert swamp. A spring or trickling stream perhaps creating a marshy area in the desert with some scrubby plant life scattered about. The sunlight would bet weak as well, so this wasn't going to be a cheery landscape conjuring thoughts of fertility. All of this sounded just fine to me.

There are folks who will ponder the apparent oxymoron that is a desert swamp. While most of our mental images of deserts are sand-covered, hot and dry, this actually doesn't define the biome. Deserts are just places where very little rain falls, and a lack of rain doesn't mean there isn't any water present. Deciding how much of that water existed and how it interacted with the land was going to be the hardest thing to decide.

I tried the idea of a bubbling spring, but it somehow had too much life to it. The swamp I was being asked to depict wasn't meant to have evoke the idea vitality, so an active spring felt at odds with the goal. Instead, I decided that a very shallow stream from an unknown origin might be better. I put that stream in a bit of a gully to add the impression that at some point there may have been substantial water moving the land, but no longer. What remained was not much deeper than the stones it washed over and was as much a mud pit as it was a body of water.

Here's how the sketch came out:


Two oddities in this sketch are that it is in color and also includes some painted-over and manipulated photo elements. Both are a rarity for me. If I colorize a sketch, it's typically only after I've gotten approval, when I spend a bit of time puzzling out some color choices before committing to paint. This time I felt that the color was necessary for clarity since a lot of the mud and water lacked separation in black and white. I think there are three colors used in total.

The photo elements are admittedly a bit lazy. I could have articulated all the dried grass, mud and stony shallows myself, but it would have taken more time than I wanted to spend, frankly. I knew I'd be painting the entire thing from scratch and articulating all that detail as I worked on the final piece. The idea of having to do it twice wasn't something I wanted to get into at the time. I don't think I've included photographic elements in a sketch since this piece, however. Nothing against using photos, but it doesn't feel like a particularly organic part of my process.

Anyway, the fine folks at Wizards gave it the go ahead and I took it to paint. Here's how the finished piece came out:


The finished painting is oil on gessoed hardboard and measures eighteen inches wide by fourteen inches tall. It was art directed by Mark Winters.

Basic land images like this may be beautiful, but in general they lack any real hook or deep problem solving. Because of this, I kind of feel like they're out of place in the broader body of my illustration work, and so I don't typically include them in my portfolio. These landscapes fall into a weird category. I like them and think they represent good examples of the quality of my work, but at the same time they don't feel quite like they're a good representation of what my work is actually all about. All of that would make a lot more sense if I could rightly point out what exactly my work is actually all about.

So then why not include this piece, my basic forest (link), or any of my Theros lands (forest, plains, island, swamp, mountain) in my portfolio? Maybe it's a fear of becoming pigeonholed as "the landscape guy," maybe it's the feeling in my gut that they're somehow a whole different genre, or maybe it's because those images fail to tell any kind of story. There are plenty of pieces in my portfolio, however, that contradict some or all of the potential reasons listed above. Plenty of that work tells no real story of substance, the inclusion of the architectural landscapes disproves a blanket prejudice, and based on the assignments I get there is no real danger of my becoming just a landscape guy. I think what it all boils down to is that the landscape pieces in question simply don't feel like fantasy and I am (mostly) a fantasy illustrator. While none of the landscapes I've painted actually exist, they feel very much like they could. They seem equally grounded in our world as the worlds they represent. Part of that is due to the assignment and the rest is due to my sensibilities. Either way, the end results feel set apart somehow.

Despite not seeing them as straight-up fantasy, boy are they a lot of fun to paint. That bit is paramount. Doing lands of any type—even if they contain architecture—are among my favorite assignments. Seriously. They're criminally fun. And I have truly been spoiled by the opportunities I've gotten to work on land art over the years. Even better, for the most part I've really liked how my lands have come out and the Amonkhet Swamp feels like a tick in the win column. Here's hoping the opportunities continue. 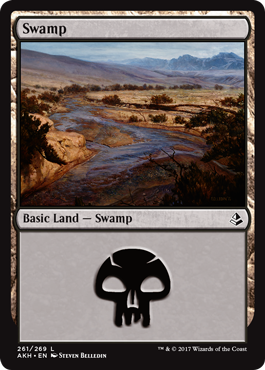