So, with the Plains and Forest under my belt, I next moved onto the Mountains of Theros. This was one I was looking forward to digging into, weirdly. So I actually had a good deal of fun with it.

For those of you who don't follow Magic at all, it might be worth noting that Theros, the plane that I was asked to depict in the landscapes I've been talking about, is heavily inspired by ancient Greece. As such, the environments have nods (to a greater or lesser extent) to the relevant geography. So, everything from the rock formations to the color of the water to the plant life have used real locations as a jumping-off point.

While that might help explain some of the look and feel of what is present in the paintings, I shall now take a moment to talk about a couple things that aren't present. The first is an element around which I centered several of the compositions initially, but then was forced to remove all traces. That thing is architecture. Looking through the styleguide, many of the landscape concept paintings include little temples dotting the countryside. I was rather hoping to include these elements both as obvious focal points and a means of selling the scale. Mind you, these little buildings would not have been hugely prominent in the amount of square inches they occupied within each painting, but they at least could have helped hammer home the vastness that I was hoping to make clear.

Alas, it was not meant to be as I was asked not to include any architecture at all. I'm sure that the reason for this is varied, but I suspect that one of the bigger reasons for not including any buildings was the desire to have a striking visual contrast between the last Magic plane visited (Ravnica, a plane that is just one giant city), and this new one. Admittedly, though, that's pure speculation on my part, so take it with heaping spoonfuls of salt. Still, it's a point of difference that I think makes a lot of sense.

Of course, there is a degree of irony that I'm talking about missing architecture at the start of one of the two pieces that never actually included any (the second being the Swamp). Nevertheless, there is still something missing on the Mountain painting, so the topic's still relevant. Since I was asked not to include the temples, I then thought it might be nice to use tiny animals in the pieces as an alternate way to sell scale. The Plains, Forest, and Mountains all might have contained some grazing animals perhaps, the Island might have included nesting birds. After proposing this idea, however, I was politely discouraged from adding these things, as well. And so I finally excluded everything but the necessary plant life, rock formations, and water from all of my sketches before turning them in.

This is what the sketch for the mountain looked like:


Like the others before it, this sketch was approved and I moved on to paint. Here is the finished version:

When painting art for cards that represent a single color in Magic, I often will lay down a ground color of the appropriate hue after preparing my surfaces. In this case, being a mountain, a red underpainting was the way to go. While that ground color is largely covered with opaque paint, the overall palette of the piece managed to retain a certain red cast. The greens of the grass have a lot of red in them, as do the grays and browns of the mountains. Even the sky retained a hazy red glow just above the horizon. It's subtle, but I think it helps the piece keep the right flavor for the game. Or at least, I hope so.

While the color felt liked it was working for me, I had a very difficult time with the level of detail. No matter how many cracks and stains I layered onto the the rock faces, the piece never felt like it had quite enough detail — especially when looking at the Plains for comparison. But, the days were flying by and I still had two more pieces to paint, so I eventually had to stop and move on.

Looking at it now, I'm pretty happy with it. A bit of time out of view amidst the stacks of paintings in my flat files was exactly what I needed to see the thing more clearly. It's always nice, to say good-bye to some of my work if only for a little while. It helps keep the obsessively self-critical part of my brain from completely taking over. 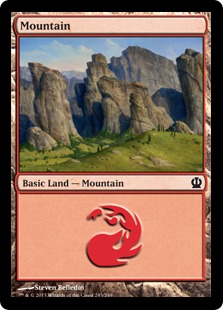