The Plains of Theros

At last I will begin talking about the land paintings done for Magic: the Gathering's Theros set. Well, I will be writing about them, anyway. I'm not going to come over to each one of your houses and read all this aloud. You'll just have to be happy with the characters grouped into words that make up the sentences below.

Anyway, the job started in a pretty straightforward way — a little odd perhaps, but straightforward nonetheless. Instead of an email I got a phone call from the art director to find out if I'd be interested in doing five landscapes for the upcoming Theros set. These landscapes would be one of each type of the five basic land types in the game. In game parlance, these are called "basic lands." Mind you, I was being asked all this months before the artwork for the set was scheduled to be commissioned and without seeing any key art to get an idea of the flavor of what I might be getting myself into. So, obviously I said yes.

What I didn't quite understand was that I was meant to start on the pieces immediately and that I'd be getting a very unfinished version of the styleguide to base my images on. This meant I wasn't in the dark for very long, and that I was already running late.

Now, I'd give you the actual art order for the assignment, but it literally just consisted of a single word for each of the five paintings with the appropriate art identification number, due dates, etc. The five words combined read: Forest, Plains, Swamp, Islands, and Mountains. Not a whole lot to think about there, so I sat down on my couch and began to churn out sketches in front of the television. These I later scanned then digitally painted over them for the sake of clarity.

Since I want to deal with these one at a time, I'll give you the sketch of the first piece I painted, Theros Plains:

Pretty clear what I was going for, I think. There's grass and some trees and some mountains in the distance. As promised, not super thinky but still fairly obvious as to my intentions. The important part is that the sketch was approved and I went to paint. Here's the completed piece:

The painting is oil on paper on hardboard and measures 24" wide by 18" tall.

This was the first of the five pieces that I painted and while one may not expect it, there was a specific reason I started the project by working on the plains: I suspected that of the five pieces, the plains would take the longest of the lot. I wasn't wrong, either. The primary reason for the prolonged production time has to do with the fact that I've never found a stylization of grass that I've found particularly satisfying. This is not to say that I dislike how other people paint grass — I don't. It's just that I've never found a way to simplify grass in my own work that feels right and true to the things I've painted around it. Invariably, when I paint grass, more generalized brush strokes will look fine at first, but before long I find myself picking out individual grass blades. Once I start down that path, then it's basically hours and hours of tedium and frustration. This piece, was no different.

With this concern in mind, I decided that tackling this piece first would be best in case the lack of a focal point should prove to be a problem. At the end of the day, I'm not sure that it is a problem, but I'm also not sure it isn't. What I am certain of, however, is that this was the piece that I liked the least after handing everything in, but it is not my least favorite now that I'm looking at them over a year later. So there's that.

Like I said, the thing took a while to paint. After days and days of pouring man hours into this piece, I forced myself to stop working on it because I had four more just like it left to paint. It was folly to continue noodling the grass day after day and potentially shortchanging whatever the last piece in the chain might be. And so I moved on.

All in all, reduced and in card form, I'm quite pleased with the piece now. I think you'll all agree that I've painted much worse. 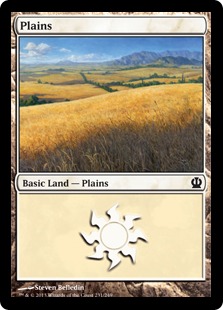