Painted at the same time as Armament Corps, Abzan Falconer proved to be far less fraught with issues. Don't get me wrong, it wasn't free of revisions or anything, but it was not nearly as difficult a process.


ART ID: 156996    title: [Abzan Falconer]
ART DESCRIPTION:
Setting: KHANAR
Clan: Abzan
Color: White creature
Location: Tower or aerie of an Abzan citadel
Action: Show a male human soldier of the Abzan who trains giant desert birds of prey. He squints bravely into the sun as behind him, a brown-feathered, sharp-beaked eagle or hawk perches on a stone perch (maybe with a falconry hood over its eyes). The bird looks almost big enough to pick up the falconer himself.
Focus: The Abzan falconer
Mood: A watchful expert


Pretty simple and straightforward, honestly. I sketched it up and sent it in. However, the intitial version I sent in, I'm afraid, seems to have been lost. I sketched it digitally and I seem to have either saved over the old file or deleted layers. Either way, it was different than the one below. The falconer himself is virtually identical, but the scale and positioning of the falcon itself was altered a couple times.


For the most part, the tweaks required me to make the falcon larger. There was also a concern that the falcon was too important within the composition (a concern that remained even with the version of the sketch that was ultimately approved). I suspect that the fear was about the fact that mechanically speaking the Abzan Falconer is not a flying creature, and so there was some worry that a composition that featured the falcon too prominently would insinuate otherwise. In the end, I ended up offering up a crop of the image that downplayed the falcon and promised that with lighting and color I'd ensure that the falconer was clearly the more important of the two elements.

Once that was agreed upon, I was given the go ahead to complete the piece.

The painting is oil on paper on hardboard and measures sixteen inches wide by twelve inches tall.

While talking with Chris Rahn, about this piece and the minor difficulties during it's creation, he volunteered that his solution would have been a bit different. He suggested that he'd have zoomed in even tighter on the falconer and depicted just the feet and legs of the falcon behind him. That might have made for a better piece. It also might have made for an instant approval rather than several back and forth emails and a few sketch rehashes.

Why I didn't think of this alternate solution is beyond me. Truth be told, I was having such difficulty with Armament Corps that I just wanted something to go right, and so I sketched something I was happy with and hoped for the best. It worked out, but now I kind of wonder if this really was the best option.

Still, I'm not unhappy with the piece. I like the color and the mood and the lighting. So there's that. 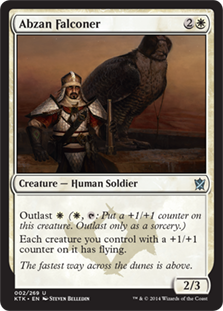 As I suggested, they cropped in on the piece when they printed it. It's really a fairly subtle crop, but it does help the focus for the purposes of the card.
0 comments
Email ThisBlogThis!Share to TwitterShare to FacebookShare to Pinterest
Labels: Black and White, Digital, Illustration, Oils, Process, Sketches

The third piece I did for Magic's "Khans of Tarkir" expansion set is called Armament Corps. Unlike Ankle Shanker and Sagu Archer, which were pretty straightforward get-the-description-do-the-sketch-paint-the-picture assignments, this one required a period of me failing to solve the inherent issues of the assignment to an epic degree. It just wouldn't come together for me. I shall explain as we go, but first we'll look at the art order itself:


ART ID: 157070    title: [Arsenal Caravan]
ART DESCRIPTION:
Clan: Abzan
Color: Green/white/black creature
Location: Desert
Action: Show a shot of the Abzan soldiers who are manning a war wagon (p. 41C for scale relationship of war wagon to beast).  This mobile siege platform is used to deliver more supplies to the Abzan clan, so we'd like to see whole wagon bristling and clattering with dragonscale shields, scimitars, and other Abzan gear as well as the Abzan soldiers themselves. This should be a shot that's close-in enough that we can see at least a few of the human Abzan soldiers clearly -- it should be more about the people than the vehicle.
Focus: The Abzan soldiers and the gear they're delivering
Mood: "Our cargo is WAR!"

The page numbers indicated in the description are references to the styleguide, or visual bible for the set. I've left those in because they raise a couple talking points. Primarily, they clue one into the fact that the central set piece of the image Wizards was looking to get out of me was a "war wagon." In the context of Tarkir, war wagons are giant fortresses on wheels that are towed about the world by equally giant beasts of burden.

So off the bat, I have to find a way to compose the piece in such a way where it is clear that we're on a war wagon as opposed to some sort of stationary architecture. Why is this important? Well, I have to assume on some level that such a visual cue might be important to the mechanics of the card the art will be printed on.

Second, I have to show a bunch of Abzan soldiers gearing up for war on the aforementioned war wagon. Seems simple enough, really. Except it isn't. And for good reason.

Put simply, the difficulty is this: I have to somehow compose a shot that is far enough away to include details of the immense war wagon that make it clear it's a war wagon (say part of the beast of burden or the rigging for attaching said beast to the wagon itself), while being close enough to clearly show the soldiers and their equipment. This image then has to be legible when reduced to printed card scale.

There are, without a doubt, artists who would come up with some really awesome solutions to this that solve all of those issues. I, it turns out, happen not to be one of them. In my mind the description reads more like a ten second moving image rather than a single shot. It requires a lot of boxes to be checked and then for those checked boxes to still work at a very small scale. In the end, after over a week of sketching, all I could come up with was a sort of helicopter shot looking down on the mobile fortress and the troops within. It was about as unsatisfying a visual as I had ever seen and I wasn't particularly interested in painting it. In fact, I never took it past the thumbnail stage. Why? Well, there was an additional problem. My only solution conflicted directly with the requirements of the topline email.

Well, before an illustrator's Magic assignment is sent out, they first receive an email referred to by Wizards as a "topline." This email provides information about the nuts and bolts of handing in our finished work (Photoshop settings for folks who hand their work in digitally and the shipping address for those who are so inclined to send in their original paintings) as well as some very vital information about the tone Wizards is looking to achieve in the set as a whole. Some sets require lots of night scenes and moody lighting. Some require mostly broad daylight. Some sets are meant to be very colorful, while others utilize a more depleted palette. Sometimes they're looking for more wide-angle points of view and at other times they require boots-on-the-ground style shots in the midst of the action. The specific looks the Magic creative team is looking for are always listed in this topline and taken into conjunction with the styleguide, the purpose is to have each Magic set gel visually despite being painted by 80-90 different artists.

In the case of "Khans of Tarkir," the topline suggested points of view from the midst of the action. They wanted everything to be from a human perspective. My birds-eye-view was anything but that. Having finally hit the wall, I sent my crappy thumbnails and an explanation of my shortcomings to my intrepid art director in the hopes that we could either think up a solution together or tweak the description a bit.

Opening that line of dialogue with my art director proved a life saver and after batting thoughts back and forth, I tossed out the idea of viewing the clearly manned war wagon from below as it rolls by the viewer. Along side it, a supply train of weapons and armor would stretch off into the distance, disappearing into the dust cloud. She suggested I sketch that one up and send it in. And so I did.


Overall, the creative team at Wizards liked the direction this was headed, but felt that the supply train wasn't quite right and asked me to replace it with an army instead. And so I did.


This version got the go ahead and I took it to paint.


The finished painting is the usual oil on paper on hardboard and measures twelve inches wide by nine inches tall.

So what's the take away? I like this piece. There might be a few kinks that I'd smooth out if I had another day to work on it, but all in all it came out pretty well. I certainly never expected to like the thing in the midst of my frustration during the sketch phase and any chance I get to surprise myself is a good thing. Among the compliments I've gotten repeatedly has been the opinion that the image is atypical for a Magic painting (at least I hope that was a compliment), and that's something I agree with. It might seem pretty pedestrian to some, but that's what I like most about it. It's not some critter screaming at the viewer or some badass muscular guy wielding a giant sword. There is no magic in this Magic painting. Instead, it's the kind of imagery that (I hope) causes the viewer to buy into the world because it captures something so believable. It's just an army, marching off to war. With a giant war wagon. 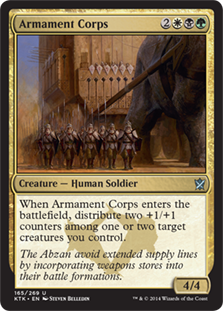