This has been an agonizingly slow process. The aforementioned cold has moved to my chest and is making things like painting straight lines pretty laborious. Add to that the fact that the cover revisions took even longer than anticipated, and it's been a pretty frustrating week. The cover, however, will be done today. It requires only a signature. Then I get to concentrate on my piece.

Here's a shot of where we're at. This time around, I've included the entire canvas. 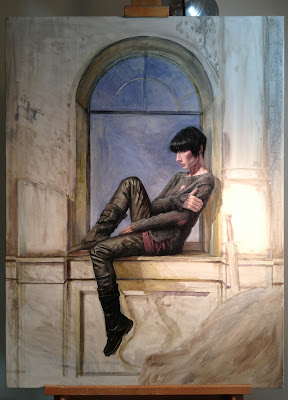 It's interesting for me to see her in a more fleshed-out environment. The original sketch that I've sat on for the last year and a half is more two-dimensional, and believe it or not I didn't really think about the perspective and such until fairly recently. Okay. Maybe that's extremely believable.

Point being that I'm kind of surprised by how she sits in the space. There are tweaks that need to be made and a few bits of reference that need to be collected to fully sell everything, but I'm going to try and get those this weekend so I can really start churning.

Not sure if my thinking I can get this done in time for IlluxCon is delusional or not, but I'm still going to shoot for it. At the moment, it does not appear that the weather intends to cooperate. As I write, a hurricane approaches. I'm guessing that the storm itself won't be too bad, but I expect the power to go out. Power outages around here are fairly frequent when there's a storm, and I'll be a little shocked if this one doesn't follow suit. The hospitals around here are certainly preparing for this possibility. They bought almost every flashlight the local hardware stores had to offer. Should the electricity cease to flow, I suspect I'll likely be reading more than painting as the overcast skies just won't provide enough light for me to get anything substantial done.

I suppose while hunkered down I could do some more IlluxCon prep, but most of that's done. I've designed my wall both with and without the personal piece and am just two frames away from being completely ready. Those have been ordered. I suppose I could do some packing, but that's not really going to eat a whole lot of time either.

Maybe I'll get lucky. Maybe the power will stay on and my basement won't fill with water. If the predictions of anywhere between 4 and 10 inches of rain hold out, however, I'm betting my attention will be in places other than my easel.

The coming week should prove to be quite interesting.
0 comments
Email ThisBlogThis!Share to TwitterShare to FacebookShare to Pinterest
Labels: Oils, Personal Work

Two things have been eating my time. First, you've got the changes to the third "Badass" cover. Honestly, they've proven to need a lot more attention than I'd expected. Second, there's this sickness I seem to have picked up. Some sort of cold... thing. All the sinus stuff isn't a big deal—I can work around it—and while attempting to paint any kind of detail work while coughing can be tricky, it's the general fatigue that's killing me. I find myself in need of a nap mid-afternoon, but instead of taking it I fight through and am probably less productive than I'd be if I just gave in and came back after a rest. Whatever.

The good news is that I'm starting to feel a bit better. The better news is that the "Badass" cover changes are almost complete. Better still is that I should be getting the background on this piece figured out today. This might not involve as much painting as it will drawing and I'll be dusting off my old t-square momentarily. Essentially, I've decided to change things a bit, architecturally speaking. I'll flesh the changes out completely today so that I can start to get through the remainder of the painting and complete it (hopefully) by IlluxCon.


So, yeah. I should have a couple more progress shots in the coming days and hopefully at the end of the week or beginning of next a bit about the cover and why it's now different. Or something.
0 comments
Email ThisBlogThis!Share to TwitterShare to FacebookShare to Pinterest
Labels: Badass, Oils, Personal Work

Admittedly not a lot of new ground covered here, but I've reworked some areas and refined others. Not sure I came out too far ahead of where I was before. Nevertheless, I've managed to get the sweater a whole lot closer to done and I also started those sweet leather pants. This is the first time I've painted leather pants since I did art for Dungeons and Dragons. In fact, between the pants and the very chainmail-like sweater, the piece feels somewhat like a bit of a throwback for me.


The big difference between then and now is that I can't rely on a lot of the tricks I used to accomplish the DnD paintings. The main reason for this is scale. Back when I was doing spot illustrations for edition 3.5, my work was extremely small. Indeed, the figures in many of those pieces could be easily covered up by placing my hand over them. The scale allowed for weird tricks that just wouldn't translate to the much larger scale of a 30 x 40 canvas. In all reality, those tricks didn't really survive the jump to Magic, either. Between even that minimal scale increase and the fact that every image now had to have a full background, I was forced to set my bag of tricks aside and learn all new ones. I'm finding the things learned from working on Magic to be far more applicable here.

Anyway, today I'll be fleshing out the pants and the boots a bit and then will begin working on the background. Next week, a lot more ground will get covered if only out of sheer necessity. As that gets dealt with, so too will the changes to the third "Badass" cover (which have all been blocked in and just need refinement). Also, I suspect I'll be doing a lot more raking of pine needles as there is a rather large tree in our front yard that has so far completely blanketed everything twice with the things and is currently in the process of doing it a third time. Right about now, I'm really hoping that the threats of having it cut down next year come to pass. I'm not usually one to get excited about cutting trees down, but I'd rather see something smaller, prettier and less damaging to the lawn in its place. Perhaps a nice red maple. 'Course that's not my decision.

Update On That Personal Piece

As promised a while ago, I'm finally digging into some personal work. I fully intended to be deeper into things by now, but as I mentioned earlier I had five pieces to work on. Originally I'd planned to paint these five pieces no larger than 16 inches wide by 12 inches tall. But after talking to a few of my fellow artists I was convinced that I should go bigger. I settled on 24 x 18 instead and went to work. From the beginning I had a lot of reservations about the increase in size, and to an extent I wish I'd followed my gut as I'd likely have finished them a lot faster and left more room for my own work. What's worse is that their completion was delayed a full week after one of the pieces was damaged. The necessary repair was far more extensive than I'd expected and needed to be done before I could submit it. Such is life, I guess. Anyway, while I wish they'd gone faster, I admit that I kind of like that they're bigger. Next time, though, I'll be listening to my gut.

Anyway, the last piece left the house yesterday and I finally got some work done on the large canvas. Not a whole lot, mind you. I spent more time than I'd have liked at the local FedEx office dealing with shipping the last piece. Shortly after I arrived there, the power went out and they were unable to send or receive because they had no juice to run the scanners. It was pretty typical of my luck.

Either way, here's a shot of the piece as it stands this morning. Okay, not the entire piece, but the part that's actually been worked on.


Basically, I've been tweaking the face a bit and have finally started working on the sweater. Weirdly, this is the first time I've ever had to tackle something like a sweater and the fact that I'm shooting for a loose weave sweater is adding to the challenge. Oddly, it's got a chainmail quality to it in that you can see layers beneath it. That I'm ratting the sweater up isn't helping either.

Once I get a better handle on the figure and am happy with its proportions and values, I'll start covering the larger areas. I find that my brain works better when its reacting to something. Sure, I could figure the whole piece out in studies and just paint as the studies indicate, but that's not fun to me. I'd rather start out with a value and color structure in my head, move in that direction, but keep things open to whim. I like to build up focal points to a certain level of finish then branch out. Admittedly this can cause problems, but it also makes each day of work interesting. What I end up doing may not be what I intended to do.

Anyway, that's where that piece currently stands. Aside from this piece, I'm making changes to the cover of the third Badass book. Rather than show process shots of that, I'm just going to show you both versions of the finish when it's done and talk about why I changed what I did, etc. That should be coming sometime in the next couple weeks. In the meantime, I'll be posting further progress shots on this painting as they happen.
0 comments
Email ThisBlogThis!Share to TwitterShare to FacebookShare to Pinterest
Labels: Oils, Personal Work, Process
Newer Posts Older Posts Home
Subscribe to: Posts (Atom)