The second of four pieces I contributed to the Khans of Tarkir expansion set to Magic: the Gathering is Sagu Archer. Of the images I created, this was easily the most straightforward assignment of the lot.

As usual, I start with the art order:


ART ID: 156520    title: [Naga Ambush Archer]
ART DESCRIPTION:
Setting: KHANAR
Clan: Sultai
Color: Green creature
Location: Sultai jungle area
Action: Show a male naga perched up in one of the trees of the steamy jungle. He has his bow out, and he already has an arrow nocked and drawn, aiming upward at some unseen thing in the sky.
Focus: The naga archer
Mood: Lurking, waiting for his moment to snipe something out of the air.

For the uninitiated, a naga in this context is one of a race of snake people. Designs for these snake people were found in the style guide and I went to work. After a bunch of thumbnail sketches, I settled on the gag of the naga archer being wrapped around a branch to stabilize itself as it aims up through the canopy at a target. This also gave me a pretty dynamic and angular pose.

The result of my efforts was this sketch:


The fine folks at Wizards seemed to like this sketch as is and gave me the go ahead to commence with the finished painting. Here is that painting:

As I painted, I found that I had to knock back the coils of the naga's tail to keep focus where it belonged. There was something about the repetitive highlights along the coils that seemed to pull the eye away from where I wanted to go. So, I ended up glazing that area back to keep the face and arms more important in the overall visual hierarchy. The downside is that the fun gag of the coils became harder to see. The upside is that the focus became clearer. It's a shame that I couldn't find a way to highlight bother equally well, but at the end of the day it seemed best to cut off the arm to save the patient.

Outside of that, things went smoothly. There were no major rehashes, problem, or any controversy to speak of. There was an assignment, I created an image that I hope did a decent job of fulfilling that assignment, and then it got approved. Simple as that. I wish they all went as smoothly. 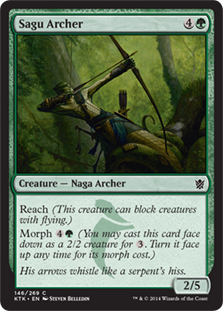 For the first time since Innistrad, I had a pretty good idea what was coming with the latest Magic: the Gathering expansion set. However, my knowledge was not due to being a member the Khans of Tarkir concept team. Rather, I was involved a bit later in the process and helped flesh out some things well after the world had been established (something I'll be expounding upon at a later date). As a result, I got to see the Khans style guide before it had been fully completed and gained a pretty intimate understanding of this new world along the way.

My first assignment in Tarkir was for two paintings. The first I'm going to talk about is (as the title suggests) Ankle Shanker.

It's a rare thing that I get asked to paint goblins. I'm not sure whether this is due to a belief that my talents are better served elsewhere or that they are a subject I'm not particularly interested in. Given that I don't have a complete understanding of how the variety of pieces in a given set are actually assigned to the various artists involved, I can't rightly or intelligently comment on the first point. The second point, however, is entirely incorrect. I like goblins and I like painting them even more. So I was pretty excited when I was asked to depict a Tarkir goblin.

Here's the assignment itself:


ART ID: 156597    title: [Ankle Shanker]
ART DESCRIPTION:
Clan: Mardu
Color: Black, red, and white creature
Location: Scrubby steppe
Action: This is a female goblin warrior of the Mardu Horde. She is famed for her speed and ferocity on the battlefield. Show her charging toward us on foot, dripping saliva as she roars, brandishing a sharp-bladed Mardu sword. Perhaps she wears a torn Mardu banner as a scarf/cape.
Focus: The Mardu goblin warrior
Mood: What she lacks in size she makes up for in viciousness. It will probably be a bit funny given her proportions, but she takes battle (and herself) very seriously, so probably best if you play it straight here.

For me, a notable aspect about this assignment was the specific request for a female goblin. I have no idea whether or not this has been asked of anyone before in Magic (I'm sure it has), but this was certainly a first for me. Looking at the style guide, the sex of the goblin designs were not explicitly stated, but I went out on a limb and guessed that they were all male. The issue then became how to feminize the goblin and figure out how far to take that feminization.

Instinctively, I felt that I shouldn't push very far at all. The last thing I wanted to do was add hips and lipstick. Instead, I felt I should start by removing some of the hair and slightly softening some of the features. The eyes got a bit larger and rounder, the lips a bit plumper. And that was about all I did.

The result was this sketch:


Fortunately, the folks at Wizards seemed to dig the direction I was headed and gave the go ahead to proceed. Here's how the painting that resulted came out:

Despite my attempts, I think our little goblin friend still reads as pretty masculine. Not the end of the world, but I think another pass might have helped indicate a slightly more female vibe. But it's still entirely possible that if one were to see this goblin next to her hairier male counterparts perhaps her sex might be a bit more obvious. Or not. Either way, I gave it the old college try.

Aside from the issue of sex, I think maybe I could have shifted the legs to exaggerate the pose more. Action shots are not really my strong suit and I sometimes fall short of really nailing motion. I think that is a bit of an issue in this piece, but I also don't think the pose criminally stiff. The whole thing might have benefited from another pass during the sketch phase to see if I could really make her fly. But that didn't happen and so here we are.

When the card came out, I discovered that my image was used only for the Intro Pack version of the card. Zoltan Boros did the art for the standar card found more commonly in card packs everywhere. I can't say as I have much of an opinion either way on that move by Wizards. The truth is, whenever there are multiple illustrations done for a single card, it always polarizes the audience to a certain extent and one will hear folks preferring one image over another. It's only natural. We like what we like. 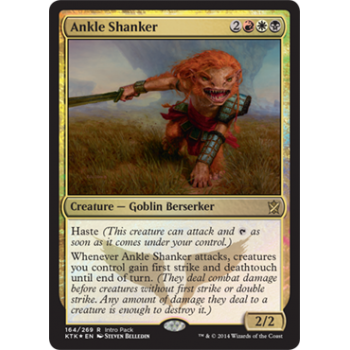 A blatant disadvantage of having my art only on the Intro Pack version of the card is that it's likely that the vast majority of folks playing will not associate my art with the card itself. To an extent, this affects how iconic the image ends up being. But, the upside is that my version appears in this cool package and I'll get one or two of those for my collection. So there's that. 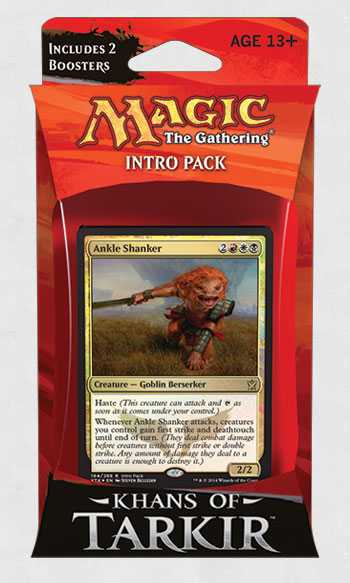 Regardless of what I would change and how folks out there will feel about it, I rather like my Ankle Shanker illustration. It was fun to lose myself in painting its angry little face and flowing ginger hair, its busted armor plates and little red cloths. When I tell folks that it's criminally fun to do what I do for a living, this is the stuff I'm talking about. This truly is a dream job at times and I hope I never have to wake up.
8 comments
Email ThisBlogThis!Share to TwitterShare to FacebookShare to Pinterest
Labels: Illustration, Magic, Oils, Process, Sketches
Newer Posts Older Posts Home
Subscribe to: Posts (Atom)