Over my tenure of working for Magic: The Gathering, I've gotten to work on a fair number of settings. I've been surprised, frankly, to get a chance to revisit a couple of these exotic locales. Thanks to the new "Battle for  Zendikar" expansion set, I got to revisit (big surprise) Zendikar. Anyway, I present you with this little post about the first of two pieces I did for for the set. This one is called Kor Bladewhirl.

ART DESCRIPTION:
Setting: ZENDIKAR
Color: White creature
Location: A kor-style settlement
Action: A female kor soldier stands on a bridge in a kor settlement in a defensive posture. She's wielding one or more bladed weapons on ropes or chains, whirling them around menacingly.

Pretty simple and straightforward, really. So I put my sketch together and it came out thusly:

I'd be lying if I said I wasn't a little excited by this sketch. I liked pretty much everything about it and I was really looking forward to getting to the painty bits. The fine folks at Wizards seemed to like it too, since it was approved as is. With that, I took it to paint.

The finished piece is oil on paper on hardboard and measures sixteen inches wide by twelve inches tall.

This piece was painted concurrently with Faerie Miscreant in September of 2014. I can also tell you that I was marathoning Star Trek: The Next Generation at the time I painted this. These aren't important facts and in no way add insight into any of my decisions, but it's a reality of what I was up to at the time.

Looking at this piece and back at the sketch, I have a nagging curiosity of what the painting might have turned out like had I stuck more closely to the value-range indicated in the sketch. Would it have been more impactful? Would it have felt too stark? Is there a happy medium between that version and the one I ended up with? Obviously there's no way of knowing without actually repainting the piece, and were I to do it all again, I think I'd give the lighter background a go.

That being said, I'm not unhappy with the result and I don't consider it a tragic failure of a painting. Every once in a while, though, a piece comes along that leads me to wonder a bit about the direction I took within the process. In doing this I probably second guess myself too much, but I find the time spent reconsidering my work quite valuable in terms of the lessons I take into future projects. A lot of folks have commented that I sound as though I hate everything I do. This isn't true, actually. I'm quite proud of my work as a whole. It's just that I know what my work looks and feels like when I'm firing on all cylinders and I worry when it's not. These pieces represent me after all, and I dislike the feeling that I could have done better.

Anyway, here's how the piece looks in card-form: 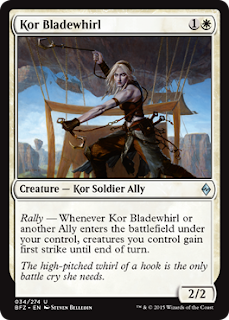