Sometimes I paint things that are not for Magic:the Gathering. This is one of those times.

Regular readers of the blog may recall the piece I did for Microvisions last year that was quite similar to this one. I was pretty proud of how that piece turned out and I was fortunate enough to receive a good deal of encouragement from various folks who got a chance to see it. One person in particular who gave me a big old ego boost was Greg Manchess, who aside from dumping a heaping pile of kind words over my head suggested that I might want to explore the subject a bit further and see where it takes me. So, I went ahead and did just that.

While the original Microvision has inspired a much more ambitious piece, progress is slow. In fact, I haven't really begun. This is due to the sheer amount of research required to get it right, not to mention the challenge of finding time to get any of said research done between assignments and various life events. However, one of the largest time sucks of my personal life—the search for a permanent abode—has recently come to an end and so I will be digging into things more deeply as soon as my assignments permit. Once the remaining dust settles, I'll be taking some more time off in an attempt to pull this bigger piece together (and hopefully a couple others in the process).

Big deal. Talking about something that doesn't yet exist is basically wasting your time, so I guess it would be prudent to shift focus to the piece that actually is done.

In the early stages of contemplating the upcoming piece, I went ahead and took another crack at the birds in a larger, slightly more ambitious way. This time around, there is one bird of each sex for a grand total of two (not to mention the various others sprinkled in the background). While one or both of the birds may still evolve a bit as I continue to explore them, I think they're pretty close to their finished design. At the very least, I doubt that their plumage will get much more decorative as it turns out that I'm rather fond of the juxtaposition between the mundane looking birds and the flames they emit. But you never know. 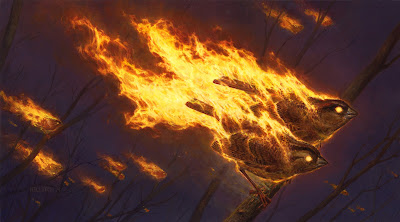 A few short weeks after doing the concepting for "Fate Reforged," the team reassembled to take on "Dragons of Tarkir." Returning were Sam Burley, Mark Winters and myself, but this time Mike "Daarken" Lim was also on hand to add his talents. With the extra artist in the mix, we would spend the next three weeks rebuilding the world of Tarkir anew. This time we explored an alternate "present" created when the dragon extinction that resulted in the world seen in "Khans of Tarkir" was prevented, and dragons not only survived but went on to rule the clans. Or something.

Once again, we'd be redesigning the world completely. However, there were a few key differences. Obviously the progression of time was a factor, but so too was man's relationship to dragons. Whereas in "Fate Reforged," dragons and humans were in conflict, by the time "Dragons of Tarkir" takes place, dragons rule the clans and so everything about each culture must reflect that. For example, where once architecture was designed to defend against or elude dragons, now it had to welcome them.

On top of this, there was still a bit of clean up to do on "Fate Reforged." A few things remained to be designed and a few others just needed a bit of spit and polish. In short, there were quite a few boxes to check off, so once again I tried my best to hit the ground running and see what I might come up with.

As with the previous concept push, my first successes were with the Temur clan, which now would be known as Atarka. I honestly don't know what it was about that clan, but they made a lot of sense to me and it was awful nice to have early successes to build on.


After getting a foothold on the Atarka clan, I went on to do a bit of work on the Silumgar tribe.


I also did some work on the Ojutai architecture.


Then I took a crack at solidifying the goblin design which was slightly tweaked from previous versions due to an idea tossed out that the continued existence of dragons might have caused temperatures to increase. I don't know if that really became a thing, but the goblins obviously made it in, so...


I also took a crack at doing some lesser dragons from a couple of different clans.


Along the way, I quickly knocked out an image depicting Dromoka's breath weapon.


Lastly, I addressed a couple of the big dragons. To begin with, I had to clean up the version of Silumgar that I was unable to complete during the "Fate Reforged" push.


Then I did an older version of Atarka.


Lastly, I took on the younger Silumgar.


Unfortunately, I didn't get through this gig without interruption. I had a low-grade fever off and on for the first couple weeks of the push that eventually brought with it a sore-throat. When my throat began to swell shut, off to the hospital I went. Before I knew it, I was full of steroids and morphine and on my way to recovery, but I lost a couple days along the way (and probably produced a bit less on the more feverish days). Happily, to the surprise of my cohorts, I returned before it was all over and helped bring the push home.

Obviously, I wish I hadn't gotten sick, as I'd like to have contributed even more. But such is life. As it stands, I'm pretty happy with what I did contribute and Wizards seemed pretty content, as well. Either way, it will never cease to amaze me where other artists take these starting points when they go to make the actual card art. I'm always blown away by how my fellow artists bring the concepts to life, and I doubt that wonder will ever go away.
0 comments
Email ThisBlogThis!Share to TwitterShare to FacebookShare to Pinterest
Labels: Black and White, Concepting, Digital, Illustration, Magic
Newer Posts Older Posts Home
Subscribe to: Posts (Atom)