The Sword of Feast and Famine

The Sword of Feast and Famine is likely the highest profile piece I've ever done in the eleven years that I've worked on Magic. Sure, other cards I've done art for are more ubiquitous, but this one has had greater fan and collector interest than pretty much anything else I've ever done. One might think that because of the card's weight, the assignment would bring with it an extra degree of pressure and stress. Honestly, though, I didn't feel it. Maybe I should have. In truth, I approached this piece the same way I might approach any other.

Normally, I'd start out with art description, but the art description contains a lot of stuff I'd end up having to explain and so I'm just going to cut to the chase and give the explanation. Story-wise, we find the world of Kaladesh in the middle of the Inventor's Fair. Widgets and doodads of all varieties are on display for all of Kaladesh's citizens to peruse and consider. The Sword of Feast and Famine is one such item and I was asked to portray the sword sitting on a stand in a display. The sword was to be elven in make and design and so would be made of both wood and metal. The metal would be near black in its darkness, the wood alive and flourishing.

The shape of the sword was based largely on the ground work done by the team of concept artists that created the world-guide. Elvish motifs and design were fleshed out quite clearly and it was pretty easy to extrapolate the sword's look. Beyond that, I decided that rather than living wood, vines might be a better way to make clear the contrast to the deadly metal blade. In my thinking, vines provided two advantages: 1) I could more densely concentrate lots of living leaves and greenery in order to hammer home the life/death contrast, and 2) vines provided a means of transitioning from one material to another more easily. Sure, I could have integrated wood pieces throughout the sword, but I felt the contrast between the black blade and living plant life was visually a bit too stark and could benefit from a greater degree of nuance. So, being able to wind vines throughout felt more advantageous in that respect.

Additionally, the vines afforded me a small story-telling opportunity in that I could show them becoming less healthy as they approached the blade. Given that the healthiest vines exist at the hilt of the sword, one could go as far as to say that the hilt and its connection to the living wielder represents life and the blade, death. No new ground broken in any of that, nor is the idea particularly deep, so I totally understand if you're rolling your eyes at this point. But it ended up being a part of the thinking that went into the piece.

Outside of the sword, I had to make decisions about the environment and the display. Given that the sword is elvish I though it would be a good idea to reflect that in the design of the stand, as well. Rather than living wood I used dead, sculpted wood (which I guess you could say is dead because it made contact with the sword?) in order to keep the greenery where it was most important. After arranging the elements I had, I ended up with a pretty balanced composition and I decided to double down on that with a symmetrical backdrop of curtain and metal filigree.

This is the sketch that resulted:


As you can see, the sketch is digital. Increasingly I've abandoned traditional sketching for assignments for the digital alternative. While it's disappointing to collectors, I have to say that the speed with which I can ideate and create alternative designs is something I rather enjoy. Perhaps I'll return to sketching traditionally sometime in the future, but for now I feel it's working rather well for me. If nothing else, it affords a quick means of doing color and value studies.

Anyway, the above sketch was approved. Here's how the piece came out:

Above is the image as I submitted to Wizards. Some of those who've seen the resulting card online have inquired about whether there was any digital trickery used in the making of the image. My answer to that is yes and no. Digitizing any painting—be it through a digital camera or scanner—can be a bit tricky. Minimally, there is a need to do some color adjustments to make the digital image match the painting. For my work, there's often a need to retouch little ridges of paint in brush strokes that catch the light and cause tiny reflections in the file. It's painstaking work, but very necessary. Beyond that, I might do a bit of tweaking, like making an area darker or brighter depending on what might help make a piece read better when it's reduced to card size. That is the case with this piece. There were a few metal reflections that I painted in oil that I later found to be distracting and I dialed them down a bit in Photoshop. Later, I glazed the painting to match. Here's what the painting itself now looks like:


The finished image is oil on hardboard and measures fourteen inches wide by eighteen inches tall.

The very decorative world of Kaladesh has many challenges inherent to it. The biggest of these in this context, is the fact that the world is so heavily adorned with filigree, that it's potentially difficult to show that one thing is more important than another. For this piece, I tried to keep the filigree to a relative minimum, make the shapes nice and large, and compose in a very simple and instantly readable manner.

In the end, I'm pretty happy with how this one came out. I like the overall contrast between the red/brown piece and the shock of green. I like the isolated black shape in the middle of the piece. And despite its triteness, I like the bit of storytelling with the dying vines. I only wish that that bit of storytelling read better when shrunken down. I think it's probable that however I tried to deliver that message, it would have gotten a little lost at card size. Even were this idea presented in a film, it likely would be been done with a closeup. Fortunately, anyone who sees the painting in person can get up close to it and do that part themselves. 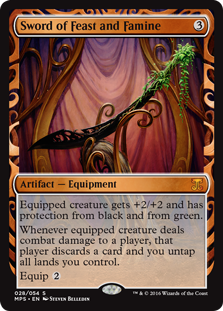