So, it's been a while. Much longer than I'd intended, really. I knew I was going to be away for a bit while I was out of the country over the Thanksgiving holiday, but by no means  was I planning on being away from the blog for an additional couple of weeks. I have quite a list of reasons as to why I've been so distracted, but I'll give you the bullet points version of the biggest (if you happen to be interested).

• Rats. They're in our yard again, and I've spent an awful lot of time working on eradicating them. Poisoning, laying traps, and filling their holes is not how I like to spend my time, but it's necessary to keep them at bay and out of our house.

• Repairs. The good news is that I sold a couple pieces. The bad news is that they'd been packed away since our move from Massachusetts to New Jersey a little less than a year ago. When I pulled them out to pack them up, I realized that they'd both suffered some damage. It was worth it to me to repair the pieces and sell them, and I think I might have even improved the one. However, this took more time than I expected.

• Rumination. It's not really news that I've been in a bit of a funk of late. I'm not super happy about my where I'm at artistically. I'm not as good as I want to be. I'm not inspired. And I'm not exactly as happy as I know I should be being as illustration is basically a dream job. I feel like I'm going through the motions and that I've dropped the ball on a lot of my work lately. Weirdly, I've been assured by art directors that they're just not seeing the lapses that I do, so clearly there's a bit of a disconnect. Knowing that it's mostly in my head oddly has not helped much.

• Rumblings. Potentially a major contributor to the feeling above, there are events on the horizon that may come to pass or may not. If they do, the impact on my work life would be pretty huge. It could mean good things in the long run, but a great deal of upheaval in the short term. If you're thinking it's children or divorce, you're barking up the wrong tree and indeed are not even in the correct forest. Suffice it to say that just knowing that there are even potential tectonic shifts afoot is enough to keep me from feeling settled and truly relaxed. Some people thrive on that tension, but it's the kind of thing that makes me want to hide in the closet until it's all over. Of course, it could all blow over and end up being that thing that almost was, but until we've gotten to that point, I'll be driven to distraction by it.

Now, I started doing this personal piece for a variety of reasons. The first was that I wanted to own something again. The copyright for the vast majority of images I produce is completely bought out by my clients. Throughout my entire art education, I was constantly warned of the evils of this practice only to find that it was standard procedure in my chosen facet of the industry (fantasy and sci/fi gaming). If I wanted to do that kind of work, I'd have to suck up any objections. Indeed, the most I could hope for in the majority of cases is that a given client would let me keep the original painting and maybe sell some prints along the way.

In addition to the surrender of legal ownership, I've felt an increasing lack of creative ownership. Over the course of my 11 years in the industry, the protection of intellectual property and enforceable points of difference between companies' products has led to more styleguides, more unified aesthetics, and less personal influence over the end result. Sure, I often can chose the composition of image and its color palette, but very often the design of the elements I'm playing with are predetermined. Obviously this is not the case for every assignment, and I'm not even sure that I can say that it's true for the majority of them. And, it's also worth noting that certain clients provide a lot more freedom than others. Nevertheless, there's been a very real decrease in the amount of input I get within the body of work that I produce each year.

So, those are two of the major reasons why this piece exists. The third major reason is that I was hoping to shake myself free of the cloudy mental state mentioned above in bullet point three. Thus far, I'm not sure it's worked. If it had, I feel like I'd have finished it by now. As you can see below, I haven't. 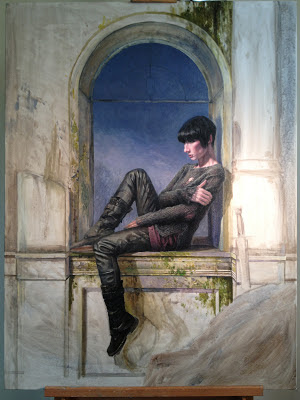 Nope. Definitely not done. However, I think I've figured a few things out. Believe it or not, there's been a fair amount of work done on the piece since last I posted an update. Sure, there's the noticeable increase in ground covered with the background being blocked in and all, but there's a lot you might not see beyond that.

Originally, I was thinking the palette might be pretty broad. Despite appearances from the previous images, the skin tones were actually quite warm, as were were many of the darks and medium tones within the figure. For some reason, I decided that I'd rather it be a cooler piece and began reworking much of what was already "finished" to be consistent with the now revised plan. That meant repainting the face, hands, and much of the sweater, as well.

In addition to the revised palette, I decided on a plan of attack so as to perhaps complete this piece sometime soon. Looking at the image above, said plan is probably pretty self-explanatory, but I like typing so I'll just go ahead and spell it out. My goal will be to finish everything within the window frame and slowly work my way out from there. I say slowly because I will soon have assignments competing for my time, relegating this piece to the background to a certain extent. When it will be completed I can't quite say, but I know that I'd rather not rush things. I waited a long time to start bringing this piece into existence, and waiting some more to see it completed seems a small sacrifice if I end up being happy with the end result
0 comments
Email ThisBlogThis!Share to TwitterShare to FacebookShare to Pinterest
Labels: Life, Oils, Personal Work
Newer Posts Older Posts Home
Subscribe to: Posts (Atom)