This one was real simple, but allowed me to flex my art muscles in a direction I hadn't in a while. The piece is a new illustration for an existing card, "Veteran Explorer." This new art is specific to Magic's Battlebond setting and the fine folks at Wizards had everything pretty well figured out before the assignment got to me.

I was asked to depict a map maker sitting in the top of a tree above the clouds. The map maker, though human, was to be dressed similarly to how the elves in the plain of Kylem (where Battlebond is set) dress and he was to be looking toward the viewer and the uncharted lands beyond. The city of Valor's Reach should be seen piercing the clouds in the background.

Given to me for reference were images of Valor's Reach and examples of Kylem elven dress. All that was left was to process all the stuff, find a way to depict what they needed from me and draw it up. Simple right? Well, in this instance, it kind of was. I knew exactly what kind of picture I wanted to make as soon as I read the description. The art order describes and adventure picture and when it comes to adventure pictures, there's one name that rings above any other in my mind: N. C. Wyeth. So, I pulled out some N. C. Wyeth art books, opened them to choice paintings that helped inform this piece, and went to town on a sketch, trying to absorb as much of the work around me and find a way to inject it into the picture I was making.

Here's how that came out:


If memory serves, there was a request that I reduce the scale of the other trees indicated in the background, right. Aside from that I was good to go to paint.

I used to print out all of my reference images before starting a painting. These images would be taped up around my working surface and were constantly present. But honestly, I found the practice to be pretty wasteful in the amount of paper and ink I was blowing through to create things that were destined for the recycling bin. Plus, its been a long time since I had a printer that I didn't have to fight with every time I turned it on. Nowadays, I print reference very rarely and even then it's only what I absolutely need. The rest of my photos are kept open on iPad or laptop screens surrounding the painting. Less waste, less fuss, and it gets the job done.

That's nice and all, but what kind of reference did I collect for this image? Well, there are the aforementioned images of the city in the clouds and the elven dress, as well as some other images that I kept looking back to from the style guide that really informed the overall mood of the world. To these image I added images of clouds and skies and trees. I also included images specifically of trees sticking up above the clouds. Additionally, I pulled out a leather case I have to help inform the map bag hanging from the tree. Essentially, if I'm unsure about any aspect of a piece, I typically collect reference for it. I'm looking to make sure that the final result is believable—maybe not completely accurate, mind you, just believable.

And then there's the reference my wife and I take.

Usually reference taking works like tike this: my wife takes the photos using my sketch for comparison and I pose for the photos. This is often true even when I am depicting a woman. The reason is that it just always goes faster that way. Sure, I'll take some back up photos of her in the same pose, but I tend to get a bit closer to the pose I want than she does. Of course sometimes I photograph people other than my wife or myself, but that isn't always feasible with deadlines and scheduling. As a result, Amy and I have take a lot of photos of one another in basements or spare rooms over the years. Digital photography has made that a lot easier, cheaper, and a lot less embarrassing. I do not miss the days of picking up my roll of reference photos from the very bemused developer.

Below is the image I mostly used in this case. There were about twenty-five more, but I picked the one that most closely matched my sketch and used it above the others.


Some folks cobble all their reference together into one, single image via Photoshop. I find that that takes time away from the easel and I'd rather spend the time there than in front of the computer. That's just personal preference, mind you, but it's worked (mostly) for me so far.

Anyway, after all the reference was in hand, I went to paint. Here are a couple photos showing it at two different stages (with absolutely no indication of how I got from point A to point B): 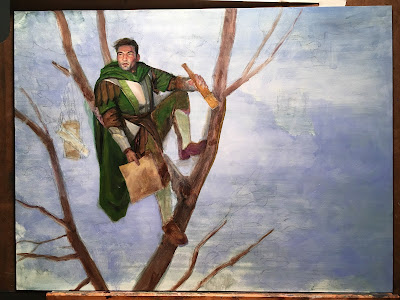 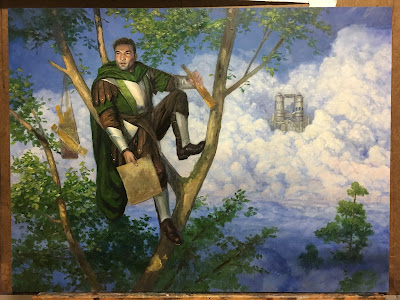 Yeah, a lot happened between those two but I can fill in some blanks. Generally, at the start of every piece I like to find some part of the image to sink my teeth into. Sometimes that's the figure, sometimes that's an element in the background. It depends on the piece and my mood. Here I dug right into the figure. I brought it up to a certain level of finish and then began to branch out from there. I established where the tree would be, using darker browns than it would inevitably be so that I could just go ahead and paint the background right over the branches and still see where they needed to be. Then I went and had a ridiculously fun time painting the background. Seriously. Those clouds were a blast. Eventually, I got back to the tree and the figure and started to tighten those things up. The second photo probably represents what the piece looked like on the Monday before the piece was due (which would have been just a few days later on Friday). There's still a bunch of details left unfinished on the figure and indeed the leaves of the main tree are still incomplete. Missing also are the beams of light shooting out from the city.

Here's how it eventually came out:


The final painting is oil on hardboard and measures sixteen inches wide by twelve inches tall. It was art directed by Cynthia Sheppard.

If I had one complaint about the finish, it's that it falls short of the more atmospheric take indicated by the sketch. Part of that was due to the request by Wizards to shrink the background trees, part of that was just decision making done on the fly. I'm sure there was a bit of a difficulty on my part marrying the atmospherics with the puffy, well-defined clouds I settled on. Still, I like where it eventually landed. Why? Well, it mostly comes down to my influences and the rare chances to nod at them in any way. Sure, I am absolutely a product of my all of my influences and therefore every piece I do nods to them in some way, but it's rare that I get to lean on my art heroes so hard.

In this case, this is probably the closest I will ever get to painting an N. C. Wyeth-esque piece. Obviously it's lacking in a lot of ways in terms of structure and paint application (not to mention scale), but there's a lot of color choices and lighting choices that are absolutely aping his work (or attempting to). Most importantly, I was hoping to capture the spirit of his work. The feelings of adventure and discovery are woven throughout N. C. Wyeth's illustrations and I was really looking to capture those things in a similar way. In the end, I'm mostly just elated that I even got a chance to try to do any of that with a Magic assignment and I'm quite proud of the degree to which I've succeeded. 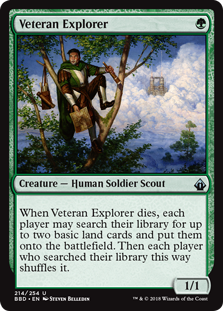