I originally started this post with an explanation of why I don't have a whole lot of work in the last two sets in the Theros block of Magic: the Gathering. For brevity's sake, I scrapped all that so I could just boil it down to two things: first, I had a lot going on at the time. During these sets, Amy and I were starting to figure out how to end our time in the greater New York area, pull up our tent poles and move on. Pretty heavy stuff that required a lot of attention and research. Second, it just so happens that I'm not a huge fan of the ancient Greek aesthetic from which the block draws rather heavily.

The primary reason that I rewrote most of this post is that trying to explain that second thing to any degree makes me sound whiny and I don't want to do that. I suspect that no one would want to read it, either. Suffice it to say that the lack of enthusiasm I felt about the block was not dissimilar to the lack of interest other artists likely felt going into sets like Mirrodin (a world completely made of metal), or Lorwyn (a very story-book, fantasy world). Let's face it, it was inevitable that Magic's constant rotation of worlds and aesthetics (my favorite aspect of working on the game) would eventually result in something that just didn't float my boat — or trireme, as the case may be. So, my solution was to focus on projects that weren't Magic and to prepare for my eventual relocation to a new part of the United States.

Outside of the five basic lands that I wrote about last November, I only contributed two more pieces to the Theros block. The first was Floodtide Serpent and Scourge of Fleets is the second. I guess it's time I talk about the second.

I seem to not have saved the art description, but I can tell you that Wizards of the Coast asked for exactly what I depicted: a giant sea kraken coming up from the depths, about to swallow a ship whole. But the really weird thing about this particular assignment was that I was invited to do something that rarely seems to happen to me: I was given the option to either follow the designs of one of the krakens in the styleguide, or come up with a design of my own. Given these two options, I honestly don't know anyone in my shoes who would have pulled out the styleguide and started copying, and so I began to build a new creature from scratch while keeping the styleguide open to maintain a certain degree of visual continuity.

Thinking about the overall composition, I reread the description several times and eventually a very clear image popped into my head: the book cover and movie poster for Jaws, painted by Roger Kastel (if you're unfamiliar, look it up as it's a pretty great piece that is simple in its design and execution). Whether or not I wanted to pay close tribute to that piece was something I had to decide early on. Imitating the composition exactly was going to be tough for a variety of reasons. For one, the aspect ratio was quite different. The cover/poster for Jaws is, of course, vertically oriented and mine was to be a horizontal piece. Second, the proportions needed to be vastly different as the creature needed to be able to consume the entirety of the victim above and thus would take up more space, while the ship would get smaller.

Given the necessities of the card art, the classic image became just a springboard, and after a few iterations I put this sketch together:


It was approved and I went to paint.

As you can see, not a whole lot changed between sketch and finish. The ship got a bit of a reworking, and there are some minor tweaks to the creature, but all in all it's pretty much the same.

The big challenge for me on this one was the waterline. For some reason, no matter what I did, everything below the waterline felt small. I think this is mostly to do with the actual line of water crossing the "lens." The waves depicted within that line aren't particularly large and seem to insinuate a scale to the stuff in the water below. Or something. The point is that I found it difficult to get the kraken to feel appropriately massive. I'm not really sure I actually fully succeeded in that effort, honestly, but I think it ended up being a lot closer in the end than where I initially began.

Aside from that one issue, however, this piece went pretty smoothly. Of course, it wasn't until after I'd completed the thing that it occurred to me that this piece was an excellent opportunity to pay tribute to one of my all-time favorite Magic images: Drew Tucker's Dandân. I'm not sure if it would have worked or turned out equally as well, but it might have been fun to explore. Truth be told, however, it would have been difficult to unseat the very iconic piece by Roger Kastel as a source of inspiration for this one.

All in all, there's a lot I like about the piece. I like the design of the creature and I'm happy I thought of the sharks and fish schooling around the creature in anticipation of a free meal. Jesper Esjing added to this piece with the suggestion that I add birds fleeing the ship. If you look closely, they're there. Perhaps fleeing, perhaps biding their time before scavenging what they can. This is a detail that totally gets lost in the reduction, but that's hardly a new thing for me.

Like I said above, I've always felt that one of the best things about working for Magic was the fact that it was constantly bouncing around to new worlds. While I like what I got out of Theros, I'm happy to be moving on to the next world. Should be fun to roll up my sleeve and dig in. 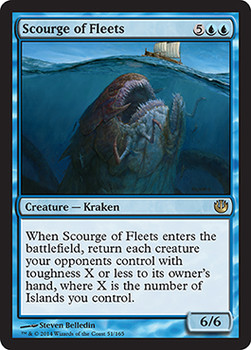