Once again, I shall reveal to you how the sausage is made. Hopefully, you still find said sausage delicious by the end, but it's entirely possible that you will be at least a little sickened by what you see herein.

So, Magic: the Gathering is about to spill forth its most recent expansion set, Born of the Gods, and this is the only piece I contributed to that set. I'm sure there's a reason why I didn't take on more work (assuming, of course, they'd have offered it if I'd asked), but I cannot recall what that reason is. What I can tell you is that this piece was painted at the same time as the Washout painting I also did for Magic.

Anyway, as with any Magic assignment, this one began with an art description. Normally, I'd include the full description, but it would be unfair to you, the reader. Three quarters of the description are references to images in the style guide. Being as I can't show you those, you'll just have to accept this highly edited version:


Action: Show a sea monster coming out of the ocean to attack a town. Have it in the process of terrorizing and/or destroying parts of the human enclave.
Focus: The sea monster.
Mood: There goes the neighborhood.

That part about the mood was really in there, and despite its light tone this piece was meant to be straight up monster movie material.

The first thing I had to decide was what the monster looked like. I was given a variety of options from which to choose in the style guide and I went with one that was more like a fish than a crustacean. The second thing I had to decide was just how the thing was going to be threatening us. I though long and hard about having it looming above the viewer and tried some thumbnails out, but didn't like any of the compositions.

I ended up going with a composition that was more about the monster's silhouette and used the city itself as a way to frame the whole thing.

I admit that this is kind of a mess of a sketch, but it I think it's still pretty clear what I was going for. We can see that the thrashing of the beast is causing huge waves that are destroying the city below. By pulling back away from the beast, I was able to directly show the devastation, the city, and the monster's scale. Or something. Truth is, I don't really think about things like that when I'm working. Things either feel like they're working or they don't. If they don't feel like they're working, I adjust stuff until they do. That being said, there's a lot that doesn't fully work in this awful sketch, but it's all stuff I knew I could adjust as I painted.

Point is, that it got approved to go to paint.

Before I actually put brush to surface, however, I did a lot of reference hunting. Primarily, I pulled a lot of photos from the internet of whales breaching. In addition, I pulled reference of tsunami waves (something that I felt was necessary, but resulted in my seeing a lot of stuff I wish I could unsee). Lastly, I built a small clay model of the big fish as seen below.

Armed with all this reference, I finally charged my painting palette and went to work. This is the result of my efforts:

The painting is the usual oil on paper on hardboard and measures 14 inches wide by 11 inches tall.

In comparison to the sketch, you'll notice that there's a lot less water exploding off the surface from the monster's breach. This is an adjustment made after seeing how little disturbance is caused by whales doing the same. I tried to scale it up as this thing is much larger than a whale, but I tried to keep it relatively proportional.

You may also notice that there's a statue missing in the foreground. This I eliminated fairly early in the painting process. I felt that the statue obscured too much of the water's destruction below. Seeing more of the devastation helped better tell the story. It also added visual clarity as a whole, and allowed for a less-muddled image when shrunken down to card size.

Speaking of card size, here's what it looks like in frame: 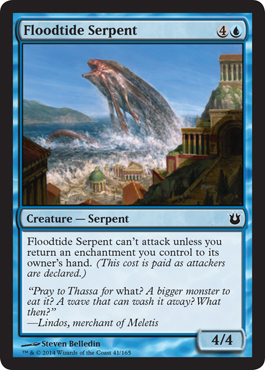 The post-game analysis of this one is pretty simple. It was more fun than I thought it would be, and it came out a little better than I thought it might. As with most of my work, there are some things I'd change were I to do it all over again, nevertheless I'm pleased with the result. If nothing else, the water surging in to destroy the buildings came together nicely (as disturbing as that is to say), and considering that that was the aspect of the piece that most worried me, I guess I came out ahead.