Sure, 2013 is over, but the very positive things that came out of it are more than just mere memory. They're my reality. I still wake up each morning in Seattle not New Jersey, and I still giggle at random moments when I'm reminded of the improbability of that fact. Couple that with the many, many sunrises I've had the privilege of witnessing each morning and you've got a very optimistic Steve at the beginning of this new year of ours.

Unfortunately, optimism just deals in theory, so here's a bit of reality:

At present I have the least amount of travel planned in quite a long time. Travel for work, that is. Right now, I have but a single show lined up for all of 2014. That show is IlluxCon. As of a month ago, I had every intention of showing at Spectrum Live again in May. Alas, scheduling conflicts have made that impossible. So, if I'm able to make it there at all, it will likely be for just a couple days as an attendee so I can visit and chat with my fellow artists as much as possible.

By contrast, at this time last year I already had six appearances lined up, so the lack of shows or Magic events on this year's agenda is somewhat jarring. But believe it or not, there's actually a huge benefit to the lack of public appearances. You see, I  have unfinished business. There's a piece I have neglected for far too long. What's worse is that there is new business I'm looking to dig into and this old bit of business is standing in my way. I'm talking, of course, about this piece: 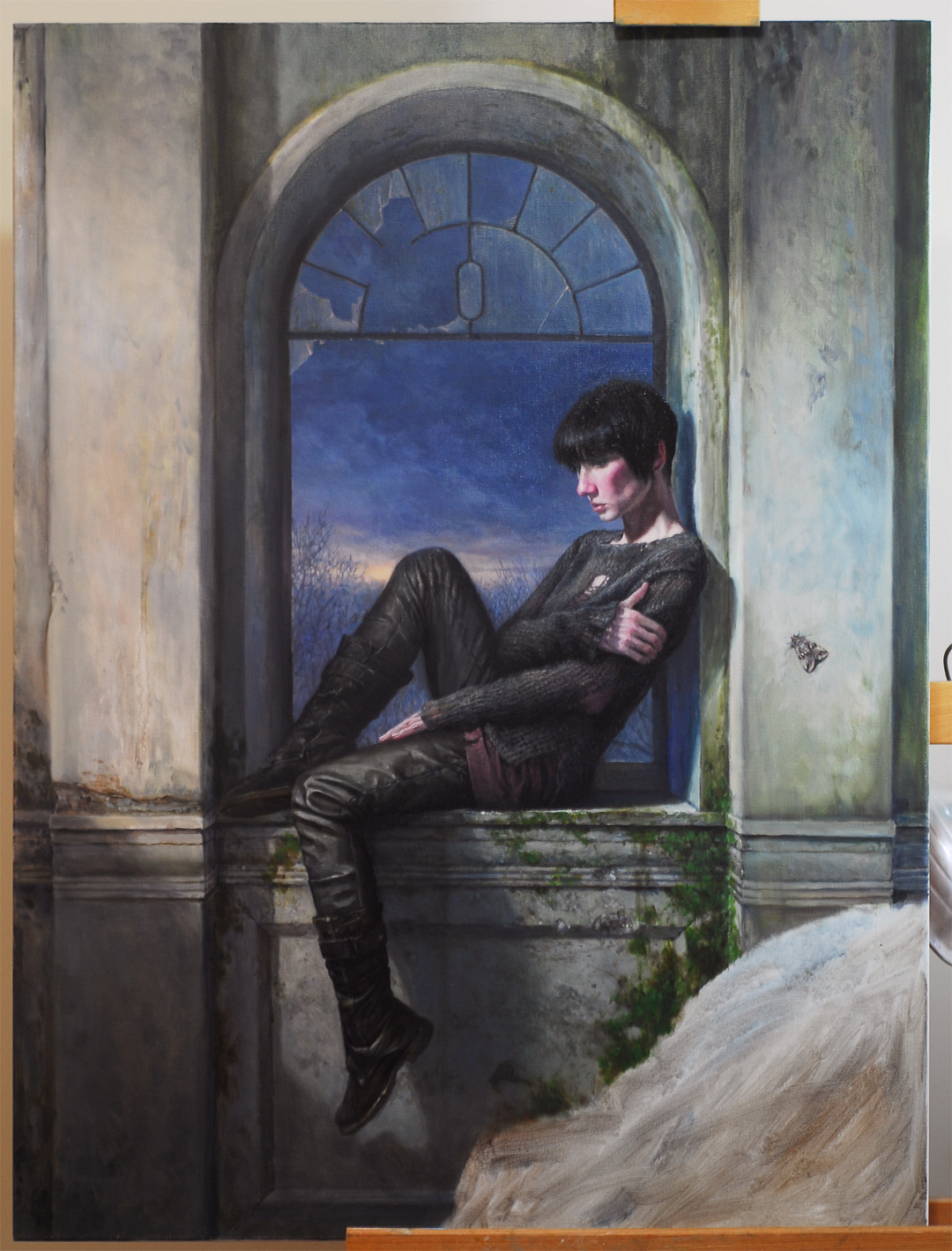 This image is the most recent I have and depicts the piece its current state. A little further along since last I posted anything about it, this piece continues to nag at me as I sit in my studio trying to get my other work done. It's about time I give her some attention and I'm hoping the additional weeks I will gain by not not making the various appearances will allow me to do just that. Then maybe I can move on to one of the new large works I've been planning.

Essentially, this lack of travel will allow me to do the very thing I'm increasingly feeling the urge to do: work for myself. As I admitted in the last post, I am fairly uncertain where I want to take my own work, but the one thing I'm positive about is that it's a terrible idea to be idle while I'm trying to figure that stuff out. I'm pretty sure that my predicament is one that I need to draw and paint my way out of, as much as think my way out of. Or something.

Either way, I am looking forward to seeing what results from the effort put forth in the little room attached to the kitchen of our rental home. Once a porch then converted into an extra bedroom, it is also the coldest room during the winter and the hottest during the summer. It is the room with the crappy, polyester curtains which I use to regulate the light streaming in from almost every direction. Familiar furniture sits in an equally familiar configuration. The off-white walls remain unadorned. No posters or postcards. No paintings or sketches. It is where the magic will happen. It is my newest studio.