From the Flat Files 10

In light of Lauren Panepinto's post on artist selfies over on Muddy Colors and a coincidental encounter in my flat files, I bring you this old self-portrait of mine. 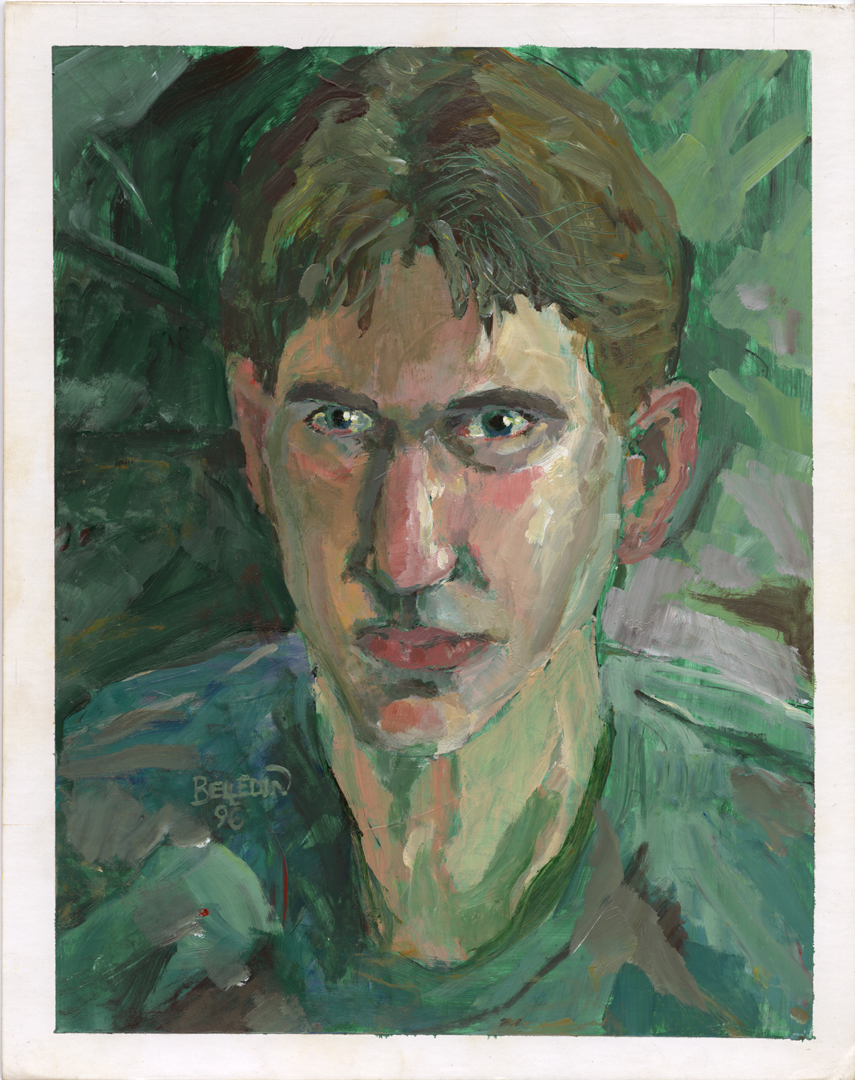 Painted in room 420 of Leo J. Pantas Hall in August of 1996, this was something I did for the heck of it before the fall semester of my junior year began at Brooklyn's Pratt Institute. I was nineteen years old and bored. I had just completed a ton of paperwork for my job as a resident adviser so I grabbed a banged-up piece of illustration board and went to work.

This is a rare piece for me. I remember exactly where I was when I did it, I remember what the weather was like and how the breeze blew in through my window, I remember the strong afternoon light bouncing around the courtyard outside, and I can even recall which t-shirt I was wearing as I got my acrylics out and started slapping paint down on top of an ink drawing. I used only one or two brushes and a painting knife. And I remember that this was a fast piece. Two and half hours — maybe three at the most.

When classes began again, I took the finished piece with me to show one of my professors, George Pratt. I approached George with the piece after class and asked for his thoughts as he began to set up his chess board for a quick game with a friend of his who'd tagged along for the day. As was his way, George gave me an honest critique — not brutal, mind you, but focused and concise. The piece was a decent exercise, but could have been composed better and perhaps been more carefully planned out. There was some fun stuff happening, but it could be better (an opinion I now have about much of my work).

For my part, I was on the fence about the piece. I knew it wasn't technically as good as it could be, but I felt that there was something there — some seed of quality. It felt important somehow. That being said, I took George's words to heart and the piece suddenly felt a whole lot less special. In the end, I verbally dismissed the piece as being "just a piece of crap anyway."

If the painting had been unimportant before then, what transpired next would cement its importance and is the reason I've kept it all these years.

I don't know why, but those words have stayed with me ever since. But it didn't end with those words. George and I talked for a little while (well, he talked and I listened). He reminded me that not every piece will be great and some will be downright failures, but that doesn't make them crap. Every piece painted has value — be it as a means to an end or the end itself.

Now, there's nothing revelatory in the words above, and some might even say it smacks of cliché. But it was exactly what I needed to hear at the precise moment I needed to hear it. Whether George understood that or not, I can't say. Either way, I cannot thank him enough for it because the way I view my work fundamentally and permanently shifted that day.

As down as I've ever been on my professional work, I have continued to value even my greatest failures. That doesn't mean I treat everything like priceless treasure and delude myself into believing I'm in any way brilliant (read any of the self-analysis I do on any given piece and you'll see). Sure, I've made some epic missteps, but those have been necessary to help make the paintings that work happen at all.

Despite the strength of that memory and what it's done for me, it surprisingly wasn't the thing that came to mind yesterday when I laid eyes on this self-portrait. My mind did not drift back to that classroom or George's words as I pulled the painting out of the drawer. Instead, I looked at the piece and began to wonder about the kid who painted it all those years ago.

The painting itself is definitely not a portfolio piece. It was done by a kid who didn't know what he was doing, but didn't care. And its value goes well beyond the memories attached to it. The paint handling is far looser than I can bring myself to do today, and there's a playfulness to it that somehow feels foreign. I look at the piece and I wonder if I'm even capable of letting go to such a degree anymore.

I suppose it's an interesting exercise to ponder where my life might have taken me if my work had been more in keeping with that aesthetic. More importantly, however, I have to wonder where the guy who painted this piece go? Is he still hanging around in my head somewhere? And if so, how do I get him to come out and play again — even just a little?

Over the course of the years that have gone by, my work has evolved and continues to do so. I have gotten better. But I wonder if I didn't lost something along the way.
Email ThisBlogThis!Share to TwitterShare to FacebookShare to Pinterest
Labels: Acrylic, Old Work, Teachers