I've failed miserably at posting regularly on this blog. Honestly, I can't really say what has kept me from keeping up to date for most of this year, but I know that I've gotten other stuff done along the way. I updated my website, built a store there, got a few things done around the house, and even got to go on vacation. Beyond that, though, it's been a bit of an off year for me to this point, and the blog has suffered. However, I shall endeavor to finish the year strong and bring the content up to the present in the coming weeks. That all starts here. With Fevered Visions.

So, Fevered Visions. It went pretty smoothly and had virtually no twists and turns. I got my assignment, did my sketch and painted the picture. As usual, we'll start with the assignment:


ART DESCRIPTION:Setting: INNISTRADColor: Blue and red spellLocation: See belowAction: This spell represents a cultist going mad from the influence of cosmic truths. One way to show this might be: show a close-up of a man's face, a terrified expression on his face. He's floating in an insane nonsensical landscape -- it looks like the inside of a massive brain, and tentacle-like neurons squirm around him, mimicking the look of Emrakul lattice. Maybe his eye sockets are empty, and we can see the lattice shapes inside his empty head, as well. Is this a glimpse inside the truth of reality, or has he gone totally bonkers? OR BOTH?


I read the above and somehow ignored it. Well, I ignored bits of it. When presented with a description like this, I tend to spend a lot more time thinking about it than actually drawing it up. I start out by reading the description a bunch of times and then walk away and let it sink in. Maybe mull some of it over. After a time, I'll begin to ask myself a series of questions about the piece in order to prioritize aspects of it, and better understand how I want to attack it. In this case, I asked things like: How close are we to the figure? How am I going to show an empty head? How do I even begin to touch on some of the abstract themes mentioned with a single image?

For me, the idea for the piece came together once I settled upon two things. First, I decided not to bother showing that the head was empty. I wasn't really interested in doing yet another body horror piece, and I felt it was going to be a bit difficult to truly pull off at card size when the environment itself seemed to be more vital to the image as a whole. Second, I decided that the piece needed a way to connect the space and the mental states described in the art order in order to get at the core of the concept. For me, the obvious way to make that connection was through the eyes.

Once I'd figured out the solution to the problem, the rest of the piece was pretty academic. The shape language of Emrakul's lattice is not actually too different from how neurons are actually shaped, so making that connection was easy. Beyond that, it was just a matter of figuring out the best way to present the whole thing. Here are the sketches I turned in:

Upon doing the bottom version, it became instantly clear that it was a lesser image. Somehow, despite showing more of the face and hammering home the expression of horror, the idea itself felt watered down. Also, the sketch felt to visually connected to Duress, a piece I did years ago that had no connective tissue to this piece. Still, I'd bothered to make the sketch, and so I submitted it.

This was a bad idea.

There is a common school of thought throughout illustration that if an illustrator submits multiple sketches, the Art Director (or editor, or committee) will invariably chose the one the illustrator likes the least. The best way to combat this is for the illustrator to give them only sketches of things that the illustrator wants to actually paint. By submitting this second sketch, I opened myself up to the possibility of having to paint something I was unhappy with from the outset, and that is truly a miserable experience. Fortunately, the Art Director in this case was smarter than me and the first sketch was the one that was approved.

So I took it to paint.

The finished painting is oil on paper on hardboard and measures fourteen inches wide by eleven inches tall.

This assignment was one of an increasingly rare breed where I got to do some deeper problem solving. The piece could have been a dude floating in space amidst a web of neuron lattice with maybe a hint of that lattice within. That might have been a fine painting, and indeed there are some who would have knocked that piece out of the park. For me, though, that image fell short of addressing the mental state. I needed to find a way to allow the viewer to more directly ponder whether the man has plugged into something deeper, or whether the whole thing is of his own creation. The resulting painting is probably no less distressing than that other version, but I think it ended up being more about the question than the man. 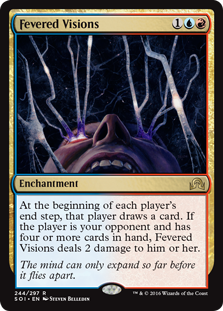