This painting was done in 2010—October of 2010, to be more precise. In fact, it was painted concurrently with Kiki-Jiki, Mirror Breaker but it ended up not being published. And so it sat in a drawer both literally and figuratively.

Originally, I believe it was meant to be alternate art for something in the Magic 2012 core set. Due to a clerical error that attached the wrong proportions to the art description, however, it ended up being a horizontal piece instead of a vertical one as intended. Given that the art director was busy helping usher into existence somewhere around 150 other pieces of art at the time, the error went unnoticed until the finished painting was handed in. Unfortunately, being the wrong proportion rendered the painting unusable and so it was put into the Magic art slush pile—a pile that at one point I jokingly suggested Wizards of the Coast finally print as the next "Un" set and call the whole thing "Unpublished."

This is not that common an occurrence. However, it's not exactly rare, either. Over the years, many pieces of art have ended up in Magic's slush pile. Way back when everything was done traditionally and one sent their art into Wizards, I remember even getting to sift through the art being stored in their flat files for future use (yes, they kept the art until it was published even if it took years, but I think this has ceased to be their practice and is largely moot due to the fact that most people—even those of us who work traditionally—send in digital files). This isn't even the first time some of my work has been set aside. Rampant Growth and Tome Scour were both painted quite a long time before they finally saw print, and I still have one more piece that has yet to see publication.

Whatever the case may be, this little tree guy was done a few years back and Wizards finally found a place to put him in the Commander 2015 set. His name (apparently) is Great Oak Guardian, and I'd be lying if I said I wasn't happy to have him out there.

Normally, I'd have the original art order ready to go and give you all the usual bullet points of the process, but I don't have a lot to give you five years after the fact. The best I can do is tell you that I have a vague recollection of the piece needing to be a treant-type creature slinging a boulder. So I drew this:


I don't remember getting any feedback beyond approval, and so I took it to paint.


The finished piece is oil on paper on hardboard and measures twelve inches wide by nine inches tall.

Right off the bat I will confess to regretting not painting this thing larger. I really wish I'd done it at least fourteen by eleven. But I didn't. So I just have to get over that. That being said, I really do like the piece. I remember feeling pretty good about the whole assignment in general as both with this piece and with Kiki-Jiki, I'd accomplished what I'd set out to do. In general, I feel like I got a lot of things right. I like the light, the color and the gesture. To boot, the fact that I don't cringe over something I did five years ago feels like a win.

So yeah. I like something I did. Weird, right? 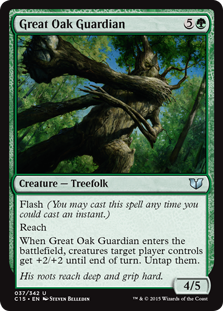