With three pieces down (Plains, Forest, and Mountains), there were just two remaining: Island and Swamp. Which was next? Read the title.

There's really not a lot of controversy or weirdness to speak of during the making of this piece. It was a pretty straightforward creation. There was the request for a painting of an island. I did a sketch of an island. Then I painted that sketch. With all of the major decisions about the set of pieces made by this point, it was a strangely simple procedure. I had three paintings done, after all, and if I didn't know what I was doing at this point then shame on me.

Like I said, I did the sketch. Here's that sketch:


Once again, I think it's pretty clear where I was headed with this one. Wizards agreed and gave me a thumbs up to proceed. And so I put a lot of blue on my palette and went to work. Here's how it came out:


Like the previous paintings, it's oil on paper on hardboard and measures 24" wide by 18" tall.

When I say I put a lot of blue on my palette, I wasn't joking. Clearly, this piece required a lot of blue paint — it's close to monochromatic, after all. But obviously it's not quite monocrhome. Once completed, however, I found that both my camera and scanner had a great deal of difficulty distinguishing between the various shades of blue. The result was FAR more monochromatic than what you see above. The areas of rich, blue-green registered as flat, Crayola blue. After many attempts at correcting the color in Photoshop, I decided that it was best just to send the thing in to the fine folks at Wizards and see if they could do a better job. Judging from the result, I think their imaging department nailed it.

A common question I get about my work is whether I send my stuff in to Wizards or digitize it myself. For the past couple years, I've been doing the digitization myself. But Wizards remains one of the few companies I've worked with that still accepts paintings and has a whole department dedicated to digitizing them, color-correcting them, and getting them ready for press. I'd say that most of the work I've ever done for Wizards has passed through that department and I've been pretty amazed by the results.

That being said, until recently, it wasn't quite so easy to get the files that resulted from their efforts. So, I'd often have to go through the trouble of digitizing my work for myself after the paintings were returned to me. It was the only way to ensure that I could include paintings in my portfolio, on my website, or offer them as prints in a timely manner. Since I was already doing it myself and getting good results, eventually it just became easier to hand in digital files instead of paintings and get all that work done up front.

Before this piece, it had been a couple years since I last shipped a painting to Wizards. Since this painting, I've submitted only one additional piece. That piece was done in temporary housing during our relocation from one coast to another. As I had no scanner, Wizards imaging team was there to bail me out.

One day, I am sure there will be no imaging department at Wizards. At least not like they have at present. For now, I'm sure glad the Wizards imaging department is around to bail me out when my own skills and equipment fall woefully shy of getting the job done well. 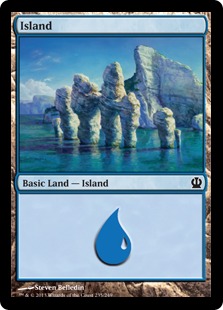