So we come to the last of our Theros lands. With the Plains, Forest, Mountains and Island covered, we at last reach the Swamp... which is the painting I'm least partial to. But that's as harsh as I'm going to be about the thing.

Looking at the five pieces, the Theros Swamp sticks out like a sore thumb. Gone are the blue sky and vivid green plant life. No golden fields to speak of, either. Just smoke and steam and all the things that live amidst the acidic boiling water of geysers and volcanic pools. With the thick plumes bellowing forth from the ground and wisps of vapor rising from the water's surface, the swamp is easily the most atmospheric of the land types. And not that subtle shift of blue-gray that comes with atmospheric perspective, either. I'm talking the thick, choking kind that obscures things that are right in front of you and makes it hard to breathe. Cool as all get out and fun to paint, for sure. But this obscuration resulted in my having to abandon an idea I had for the entire set of lands that might have made them much more of a matching set.

The big idea in question (for what it's worth) was to have hints of one of the other lands just barely visible somewhere within the composition of each painting.  For example, in the background of the plains, I wanted to clearly reference the mountain piece in the far-off mountains at right. In the mountain piece, I was hoping to include the forest piece in miniature amidst the tiny trees at the base of the rock faces. Perhaps the plains might have been visible in the far-off bits of the mainland in the background of the island piece.

You get the idea.

Now, obviously these references couldn't be explicit. I didn't want to give anyone the impression that these were dual lands — a totally different type of land that I'm not going to bother explaining, so you'll just have to trust that explicitly focusing on two types of land in one piece could be an issue. In order to keep their subtlety (not to mention because of issues of varying scale) such references would likely have been too small to read clearly in their card form. But for a 24" x 18" painting? Such a thing might have tied them together nicely. Alas, it was not to be.

What sank the idea? Well, the smoke and steam inherent to the swamp presented two problems. First, vapors that would need to be included in the swamp's composition would certainly blot out any reference I might have made to another land type in its background (the only place within the composition that I really could have feasibly put it). Second, all that atmospheric stuff shoehorned into one of the other pieces might have called too much attention to itself, thus removing the subtlety I was looking to achieve.

Still, I did spend a couple days exploring different ways of doing things. I changed the composition of the swamp around to try and accommodate the references, and I tried swapping around the references I intended to make to see if I could make different ones work. Over time, however, it became clear that I was just cramming this big idea into something that didn't need it and would likely remain unnoticed anyway. Plus, I was losing time. And so this big idea of mine ended up being dropped altogether, and (along with the temples and animals to help sell scale) it became the third thing you don't see in these paintings. Truth be told, I think the pieces are better for it.

Anyway, here is the sketch that I did in all its terribleness:


Believe it or not, that got approved and so I painted it thusly:


Like those before it, this piece too is oil on paper on hardboard and measures 24" wide by 18" tall.

If ever there was a piece that I've done for Magic that fully reflected my feeling at the time, this would be it. As I painted this piece, I was still feeling pretty down on my work. Not as badly as I did before, but I was hating the results of my days' efforts. And I was tired of feeling that way.

What made it worse was that I finished this piece in a barn surrounded by other painters working on their own pieces. People like Darren Bader, David Polumbo, Randy Gallegos, Greg Manchess, Dan Dos Santos, Lars Grant-West, Jordu Schell, Boris Vallejo, Julie Bell, Michael Whelan, Chris Moeller, Tony Palumbo, Scott Brundage, and Winona Nelson. If there was a hierarchy, I was bringing up the rear and I knew it. Something needed to change and I began finally to realize that I was the only person who had the power to change it.

When I finally got home, finished painting in hand, Amy and I began at last to address the malaise that we both felt. We had no idea where that discussion would lead, but we knew it needed to be somewhere other than where we were then — both mentally and physically. We decided that we wanted to leave the New York area and finally made the decision to start exploring our options. A list was formed of places we might want to move to. Number one on the list? Seattle.

This swamp was the last piece of a project that I only now realize was the beginning of a huge change in our lives. It's pretty weird and amazing where things have gone since. Where we have gone since. And it's an even weirder thing to be able to look at some of my work and still be unhappy with it, but use that unhappiness as motivation to do better on the next one. 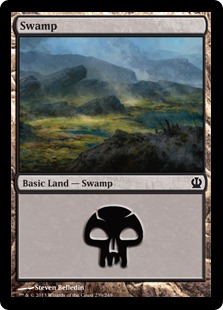