There's a bit of a background to this piece that is worth talking about, but is something I'm not going to get into just yet. Suffice it to say that I was part of a two week concepting stint that helped design the look of Fate Reforged, the second expansion set of Magic: the Gathering's Khans of Tarkir expansion block. The designs of the dragons were a part of that gig, and I admit that I had a some input along the way.

At the end of the concepting push, I was asked whether there was anything in particular I'd like to paint when it came time to do the actual card art. I'm not the kind of guy who likes to ask for anything, so I kept my request general. I simply stated that it would be nice if I got to see something that I'd created to its natural conclusion. In essence, I wanted to paint something I'd actually designed — something that did not happen when I'd helped build the world of Innistrad. The response I got was a simple okay, and the world moved on.

What I expected to be assigned as a result of that request was some cool paintings of one or two of the clans I'd reworked for the world. Maybe some cool architecture or something. Yeah. Not so much. Instead, I got assigned Silumgar. One of the main dragons featured in the set.


ART DESCRIPTION:
Setting: FATE REFORGED KHANAR
Color: Blue Black Legendary creature
Location: In the sky over Sultai jungle. p.222-225 Fate Reforged worldguide.
Action: Show the epic movie poster shot of the dragon tyrant flying over his domain (see p. 240 Fate Reforged worldguide). Put the camera in the air with the dragon - helicopter to helicopter. The dragon is flying toward us, greenish gas trails from his mouth as he flies.
In the far background we can see a purplish-blue storm brewing in the sky.
Focus: The dragon

Seems pretty clear. I knew what the dragon looked like and I went to work.


Like a lot of my sketches nowadays, I started with a pencil drawing but quickly abandoned it in favor of a digital value study. Honestly, the speed of laying down the values in broad strokes is something I really like a lot. It allows me to more easily keep up with what's in my head and allows me to get to iterations that I'm satisfied with more directly. Or something. The short version is that sketching can be painstaking at times and in the past I've actually gotten burned out on a piece before I even went to paint. Planning is important, sure. But for me, there's such a thing as planning too much.

Anyway, the above sketch was quickly approved and I was laying out my palette before I knew it.

The sharper eyed of you will notice some difference between the sketch and the painting. These include (but are not limited to a change in the landscape below and a shift in values around the dragon's head. Neither of these changes required approval and both were done on the fly. The altered landscape is simply due to the fact that I realized mid-painting that the landscape as it originally was designed failed to echo actual landscapes of Tarkir. I wasn't exactly sure why I had ignored such a thing, but I rectified it pretty quickly after realizing how off I was.

The value shift was simply about pulling the eye to where it needed to be most. After painting the horizon to mirror the sketch, I quickly realized that my eye lingered anywhere but the dragon's face. I kind of wanted the viewer to linger there a bit, so I wiped what I'd done and made the adjustment.

Strangely, despite being sucked into the world of fantasy art, I'd only ever painted one or two dragons before this piece. Truthfully, it's a subject I'd actively avoided for a while. Why? Well, as far as tropes go, I don't know that I have a whole lot to add and it's one I'm not particularly interested in. For me, dragons are a bit tired. For others, it's something that remains endlessly exciting. I wish I had such enthusiasm. Obviously, I can't fault anyone for liking what they like, but if I'm sitting down to paint something for myself, dragons are pretty low on the list of subjects I want to visit and explore. So, it remains a little weird to me that I was asked to paint this guy.

That being said, I'm very happy to have gotten the opportunity. There is value in being pushed to do something that one might otherwise not be inclined to do. Eating vegetables for example, or trying on a pair of skinny jeans (which it turns out is not a good look for me). In this case, it was a paid gig, sure, but that didn't mean that I was going to enjoy it at all. Surprisingly, however, I had quite a good time working on the piece and it's one that I'm rather pleased with.

Still, don't expect me to release a series of dragon paintings anytime soon. 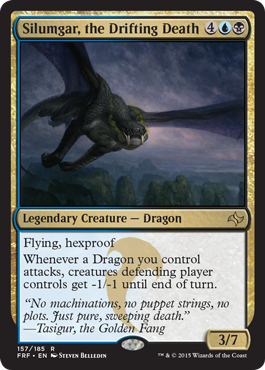