This was, without a doubt, the most complicated piece I've ever done for Magic: the Gathering. While not conceptually challenging, this assignment presented a visual balancing act that lead to more crumpled paper and discarded digital layers than any image I'd done for the game to that point. What was so difficult? Let's take a look at the art order and discuss it.


ART DESCRIPTION:
Setting: FATE REFORGED
Color: White spell
Location: Abzan territory. The ancient capitol city fortress of the Abzan - similar to pp. 196-199 Fate Reforged - it should look solid, impressive but show signs of dragon attacks - scorching, claw marks, etc.
Action: Show the dragon Dromoka (p.234 Fate Reforged worldguide) attacking the fortress city of the Abzan along with some of his breed (p.235 Fate Reforged worldguide). Dromoka could be attacking the ramparts of the fortress with his claws, or crushing some hapless Abzan guards, or breathing a blast of searing white light at the fort or some soldiers - up to you. Dromoka should be noticably larger (his body is about the size of a school bus) and more badass than his breed dragons.
Some Abzan mages are shooting blasts of swirling sand magic at some of the lesser dragons, scouring their wings and tearing their hide. The outcome of this battle is far from predictable.
Focus: The battle between clans and dragons.
Mood: Epic scale. A brutal war in the desert - steel and magic versus dragons!

The big deal is that there is a lot in this description to articulate, a ton of stuff to reference, and all of it has to fit within the dimensions of the card art and be readable when the image is shrunk down to its 2.103 inch x 1.543 inch printed size. Believe it or not, this was no small task.

Looking closely at the vast majority of Magic images, one can see a fairly clear trend. A large portion of images contain at most two or three figures (or creatures), and those figures (or creatures) often retain a very clear silhouette. Indeed, the figure/ground relationship has traditionally been pretty important to Magic paintings as a whole. While a figure needn't always be something that can literally be cut out of the background intact, it does have to be easily discernible. Having a figure that visually pops off of its background (either through a high level of contrast or a difference in color, or via some other means) is typically a very good way to retain legibility when an image is reduced. The more complicated the image becomes, the less likely that image will retain that legibility when at printed scale. There just aren't printer dots small enough to articulate it all.

As a result of this very basic need, epic battle scenes are a rarity in Magic images. They're not wholly absent, mind you, but they're not exactly regularly featured. While I'm not entirely sure whether the rarity of such assignments is due to Wizards' understanding of how muddy the results can be, or if they're just sympathetic to the amount of work this kind of thing can entail is beyond me. All I knew was that I was pretty intimidated going in.

To be clear, were this a battle scene completely composed of humans and human-sized creatures, I kind of feel that things might have gone a bit smoother. If all of the fighting parties were roughly the same size, I likely would have selected a few central figures to focus on and then insinuated a lot of the rest. These central figures could have occupied a large enough portion of the composition to keep them readable. On the other hand, having a bunch of humans fighting a dragon whose body is roughly the size of a school bus immediately forced me to push the camera back from where I might otherwise have placed it in order to show enough of the dragon for it to clearly read not just as a dragon, but the specific dragon it was meant to be. The result of pulling the camera back was that humans became smaller and smaller and the task of keeping the action clear became a little less straightforward. I did a number of thumbnails and scanned them into Photoshop to see if I could make any of them work. One by one, I shrunk them down to see if I could still determine what was going on in them. The results were primarily mush and I was forced to restart the process more times than I'd like to admit.

However, after several frustrating days of trying to approach the problem from a variety of angles and failing miserably, I scribbled this: 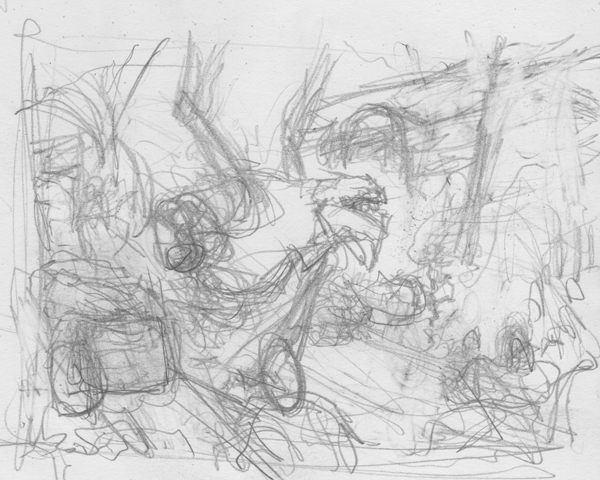 It probably appears to nothing more than complete gibberish to most looking at it, but trust me when I tell you that there's a dragon in there and a bunch of guys fighting him, along with a magic user, an explosion, and a some architecture. As horrible as the image is, it actually contained most of the elements that would eventually end up in the completed painting.

In order to address the smaller figures, I decided to layer them in groups and back-light them in order to get high contrast silhouettes for maximum readability. While there would end up being no stand-out human individuals, at least the troops had a fighting chance of still looking like troops at the smaller scale.

Anyway, I scanned and digitally painted over the above sketch and got this far: 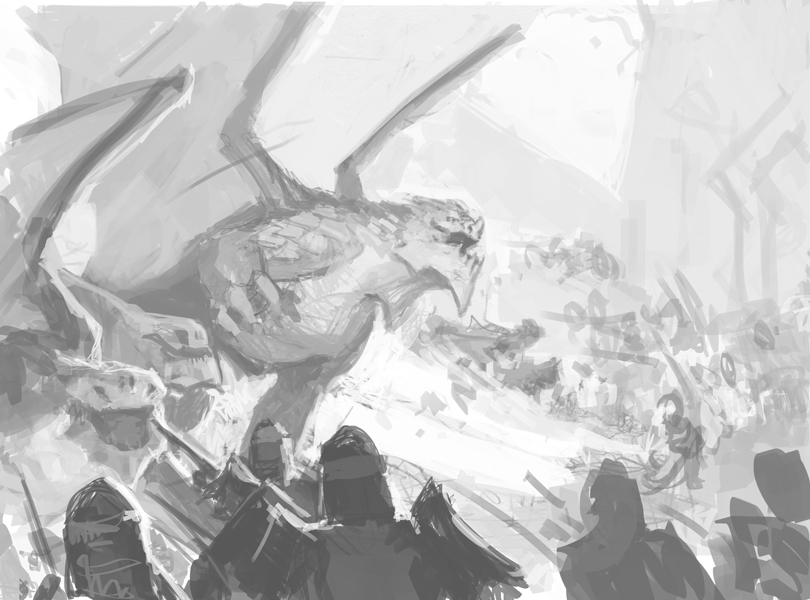 Not my finest moment of digital painting, but you can see where I was headed. Sort of. Unsure of myself, I sent the image both to the art director, as well as a couple of my fellow illustrators for fresh sets of eyes and to see if I was headed down a usable path.

The criticisms that resulted were these: 1) the main dragon was not big enough; 2) Wizards wanted me to give the dragon's breath weapon a go; 3) the dragons felt a little crowded together; 4) the location felt a little nebulous; 5) could there maybe be more dragons?

All valid points. I took all that in and made another, tighter pass. 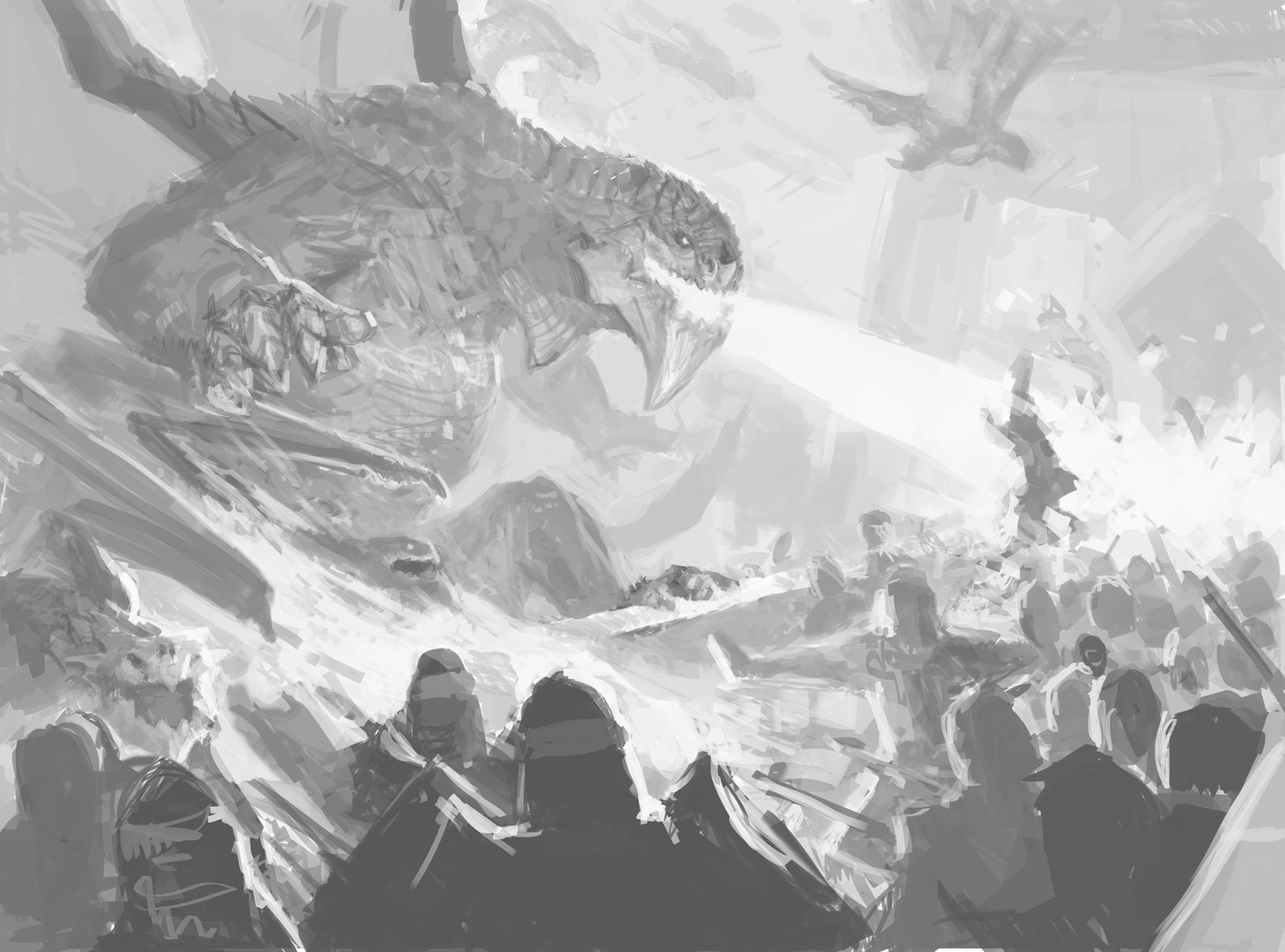 This is still a very bad sketch. But it was an attempt to address the notes listed above. I likely would have done another pass on it, but I showed it to the AD again at this stage to make sure I was on the right track. To my astonishment, the reply I got was an approval.

At this point in the process, I did not like this piece. But I had the green light and needed to move forward. The clock was ticking and so I set to work trying to salvage the piece. Here's how it ended up:


The finished painting is oil on paper on hardboard and measures eighteen inches wide by fourteen inches tall.

After handing it in, I was asked to make a small tweak to the piece, which I handled digitally. The dragon's breath is meant to be intense light rather than focused flame and it was felt that I needed to push things a bit more to make that clear. So fifteen minutes of Photoshop later and I had the issue corrected. I ended up reworking the painting a bit to incorporate those same changes, but that happened weeks later.

Along the way, I didn't have a whole lot of confidence in my ability to make this one work. When writing back and forth with the art director and discussing the states of my various sketches, she gleaned that I was less than enthusiastic and asked me point blank if this is a piece I'd like to give back. After a moment's consideration, I answered no. I knew this piece was going to be a challenging slog because it's not the type of thing I typically do. On some level, however, I knew that that was precisely why I needed to see it through.

This painting has a lot of hours in it. I worked and reworked large areas and grew pretty frustrated with my stupid, stupid fingers. And, unfortunately, I ran out of time. I could have invested a LOT more time on this piece than my deadline would allow for. But I ended up being happy with more than I originally expected to, so in my book it's a win.

I'm a little unsure of whether or not I'll ever be assigned something with this much going on in it for Magic ever again. I'm sure there will be card art not unlike it in the future, I just doubt they'll call on me to do it. But, I surprise myself a little when I say that I wouldn't say no, and I'm starting to wonder what more complex personal work might look like, as well. 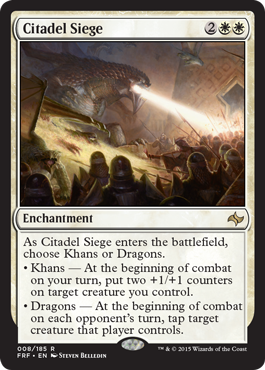