The third and final piece I did for the Fate Reforged expansion set for Magic: the Gathering, was a first for me: a piece of art for a token. I can now check that box off. Such an assignment is about as straightforward as they come. Most tokens, after all, consist of a single figure or creature in the middle of the composition.

Here was the art order:


ART DESCRIPTION: TOKEN WITH TEXT
Setting: FATE REFORGED
Clan: Jeskai
Color: White creature
Location: A Jeskai martial arts school in a Jeskai fortress similar to one of the ones on pp. 206-208 of the Fate Reforged worldguide.
Action: Show one of the student monks in this Jeskai fortress. The student is a young, bald female, about 15-18 years old. She has a straight staff and stands, ready battle. (she is costumed similar to the monk on p. 204C of Fate Reforged worldguide)

Yup, pretty much a monk in the middle of the picture. The result was this sketch:


This preliminary was completely digital and I considered very seriously seeing it through to a fully realized digital finish while waiting for feedback from the fine folks at Wizards. But then I remembered how much I like to paint traditionally and started prepping my surface as soon as I had the green light to move forward.

Honestly, this was a pretty quick piece. The sketch pretty well articulated where I was going with the painting and since I painted directly on top of a digital print of said sketch, there was very little left to figure out. Aside from the face redesign, the process felt a bit like paint by number. Or something.

Anyway, here it is in card form: 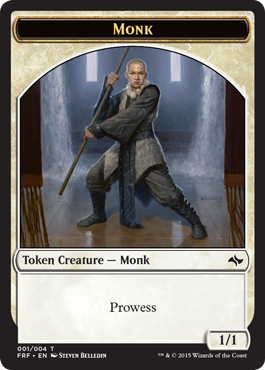