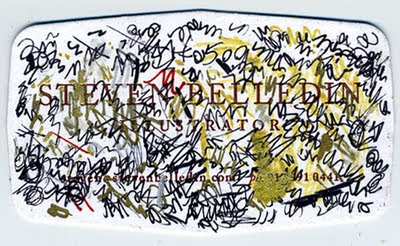 Every time I do a signing, I eventually end up with one of these.  It's sort of a pen tester/blotter.  Over the course of a signing, pens can get a little gunked up and will suddenly just stop working.  So, on the side, I keep something to scribble on to jump start my pens and get them going again.  As you can see, over the course of my signing in Japan, I used one of my business cards.  I usually use a piece of scrap, but I forgot to pack some.  The way I saw it, I'd have one fewer card to take home with me, but of course I brought it home with me, anyway.

I've got lots to say about Japan, and a bunch of pictures to post, but I just got in late last night and am trying to catch up with work.  I'm going to need a day or two to organize my thoughts and hammer them into something worth reading, but suffice it to say that Japan was awesome and the fans there were equally so.  I was treated well, had a blast and I look forward to going to Japan again soon — either on Magic's behalf or for my own vacation.

In the meantime, I'd like to take this opportunity to publicly thank the fine folks of Wizards of the Coast for inviting me out there.  I wanted for nothing and was treated with more forgiveness than perhaps I deserved after a night of over-indulging.  I am humbled by the generosity of Wizards and the fine folks who work there.  Many, many thanks.

I'd also like to thank the fans who came from all over the world and stopped by to say hello.  I continue to be blown away that anyone would want my signature, let alone be willing to wait in line for it.  If I made any major gaffs or violated any international laws, they were kind enough not to point it out to me.  If anything, the fans were awesome as usual and often found humor in my terrible Japanese and inability to drink saki without major consequences.  I am honored by the fans' many kindnesses and I look forward to hopefully meeting them again soon.  Until then, I'm afraid I need to get back to work.
Email ThisBlogThis!Share to TwitterShare to FacebookShare to Pinterest
Labels: Life, Magic