One thing I didn't consider when I went to Japan was that I might be bringing home more than I took with me.  In fact, I was rather hoping that my load would be lighter and that I'd be returning with fewer prints, artist proofs, and originals.  Somehow I managed to do both.  My load was lighter, but I ended up with more stuff.  Sure Amy and I bought a few trinkets to remember the trip by, but the thing I just didn't see coming was the gifts.

More than anything I was gifted with food.  I got deserts from Japan and tasty things from several other far-off lands.  I also was presented with a Japanese fan as well as bookmarks from Mexico.  All really cool.  But, what ended up taking up the most room in my bags on the way home were four framed pieces of art, each presented to me over the course of my signing by the artists themselves.  These were the shadow box versions of four of the cards I've contributed art to over the years.

As I understand it, the shadow boxes are constructed using anywhere between 5 and 7 copies of the same card layered on top of one another with bits cut out in each layer so as to create a three dimensional version of the card.  While I understand how it's done conceptually, I doubt I could ever create one, myself as it takes a kind of thinking that somehow feels beyond me.  Either way, each of these creations are amazing and the displays many of the gentlemen listed below had at the Pro-Tour in Nagoya were truly jaw-dropping.

The first one is by the gentleman who started it all, Seishirou Ohkubo (bio here), who began making these objets d'art in order to combat his ever-growing collection of common Magic cards (they vary in rarity from common, to uncommon, to rare, to mythic rare).  Why he decided to go the labor intensive route of making shadow boxes is well beyond me, but the net result is pretty incredible.  Anyway, here's what he gave me.  It's of the card, Shield of the Oversoul. 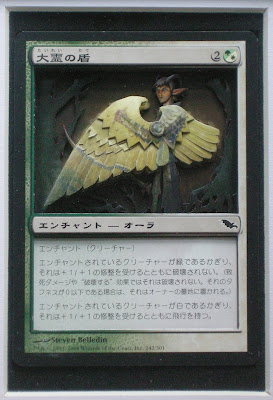 No idea how many layers are involved on this one, but what I did find out with all of them is that they are insanely difficult to photograph in a way that preserves their 3-dimensionality while keeping them well lit enough to see consistent detail.  I clearly failed on several of them and even after a couple hours of fiddling with my lights, changing shooting angle, and swapping out lenses, fell severely short of anything that does them justice.  Trust me when I say that they are WAY cooler than my photos would otherwise indicate.

The second one is a pretty tricked out version of Loxodon Wayfarer, by Yuusuke Yamamoto (not to be confused with the Japanese actor of the same name). 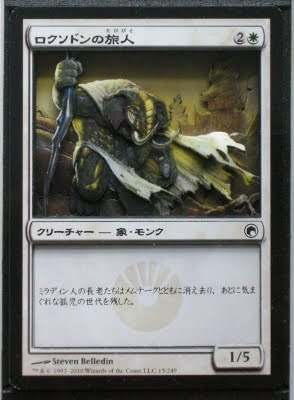 Again, no idea how many layers are involved, but what is interesting is that the cloak is bent and folded, as well as embossed in places to add to the 3-D effect.  This folding and embossing seems to be present in all four of the images I was given and it's the kind of thing that requires a steadier hand than I seem to have.

The third image is of Etherium Sculptor and was done by Masanobu Kondou. 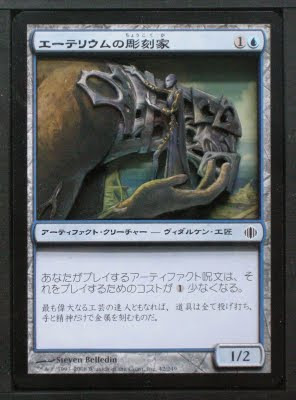 Finally, we have Rally the Forces, by Junji Tsukamoto. 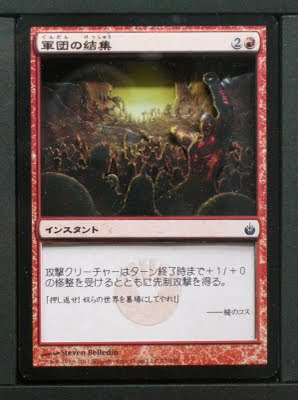 Gonna have to excuse the glare on this last one.  It's the best I could do.  All the dark ink made taking a photo of this one any kind of justice pretty much impossible.  So, I took it out of its frame and shot a couple pictures of it at odd angles to give you all an idea of just what's entailed and how these things are actually constructed. 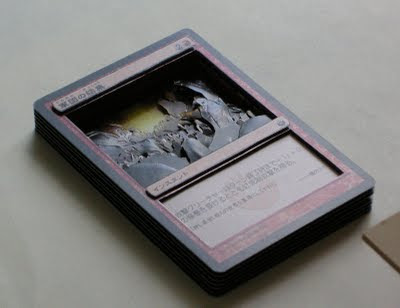 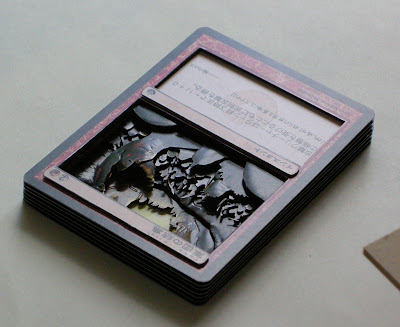 Hopefully these images show what I've thus far been unable to describe.  Again, my photos fall really short of depicting just how cool these things are, and I can assure you that they'll be just about the only things I actually show off to any visitors to my studio.

At the end of the day, I honestly didn't see these things coming.  I had seen the shadow boxes at some of my fellow artists' studios and I remember thinking how cool it would be to one day have one of my own.  I had no idea that I'd end up with four.

I want to take one final opportunity to thank all the fans and especially those who came bearing gifts.  I really do appreciate everything, and I hope to see you all again sometime soon.
Email ThisBlogThis!Share to TwitterShare to FacebookShare to Pinterest
Labels: Fans, Magic