Two Years In and Diggin Out

I started this blog two years ago today. One-hundred eighty-five posts later, I'm still working at it. A lot of the things I'd hoped to do on here just haven't gotten done. Some probably never will, others I still hope to get to. As it turns out, a blog can eat a lot of time and has the potential to be a pretty big distraction. Were I a writer, I suppose it might more naturally fit into my daily schedule. But I'm not a writer, so there's always a mental gearshift and a period of time spent questioning whether or not I can even afford the bite the blog takes out of my daily routine. And while the posts come a lot easier nowadays than they used to, they still don't exactly roll off my fingertips. Still, I'd like to be doing more.

Unfortunately, my schedule in the foreseeable future will likely make that difficult. Yesterday, I began work on five 24"x18" paintings. They're for Magic, and they're going to take a while. I'm not sure when they'll be done, but it really won't matter to the blog as they won't be released for a full year or so.

Simultaneous to that little project, I'm trying to rework parts of a cover painting I did a month or so ago. It's already been handed in, and despite being pretty satisfied with the parts that will appear on the actual book cover itself, I felt the painting overall could use a bit of extra attention. When that piece is done, I'll post it up here in both states with the usual explanation and self-deprecation.

In addition to the painting inhibiting lots of posts, it would seem that I won't have a whole lot of work to show in the very near future. At least I don't believe I will. (Though I've been surprised by a random Magic release before). So with little work to show, I'm just going to have to put together some more wordy stuff — you know, the kind of thing where I stand on my matchbox or climb atop my rather short pony. Maybe throw in a semi-autobiographical story or two. Try to entertain you all without pictures. See how that goes. Hopefully I can get these paintings done before we all grow tired of that and abandon the blog altogether.

If nothing else, I can provide you with news we all can look forward to: I'm going to be taking some time off. Time off from my normal illustrations schedule, that is. I'll still be painting, but I'm going to be doing some work for myself. I'm hoping to string together a few pieces and see where they take me. I've already started one. It's 30"x40" and has been sitting in it's sadly unfinished state for a couple months now. I'd intended to do the piece earlier this year, but then the aforementioned cover reared its head and I honestly couldn't turn it down. So my personal work got postponed.

This fall, however, I am committing to at least a month where I'm working for myself. I'm going to try and put together a bunch of stuff for IlluxCon so as to have a completely new wall with no repeats from last year. Happily, just completing the 30"x40" piece will ensure this by itself, but I'm not going to stop there. Bottom line is that it should be an interesting ride, and I'm intent on bringing everyone who's interested along with me.

Not sure yet whether the coverage of the personal work will be quite as exhaustive as that of the Valentine cover, but at least it'll be more than just a sketch and finish. In the meantime, to thank you all for sticking with the blog, I'll leave you with this small glimpse of the unfinished canvas as it now appears (taunting me daily with its lack of completion). 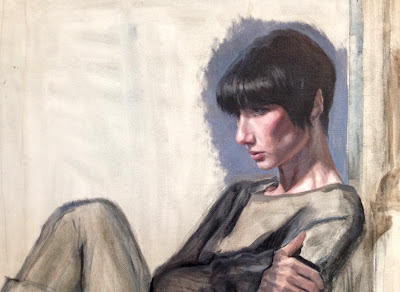