At long last I present you with the third Badass book cover. This one is for the upcoming third book in the series, Badass: Ultimate Deathmatch, and went down without so much as a hint of drama. IT was sweet.

Now, as with the previous two Badass covers, I was asked to paint an image incorporating multiple figures. Whereas the first book had three figures and the second had five, this one required four figures... and an airplane. So I guess it's kinda like five... sorta. Anyway, the initial figures requested were: a samurai, a Roman centurion, a Gulf War era U.S. Marine, and the Mapuche warrior Galvarino. The airplane I'd be depicting was a British Spitfire from World War II.

Just as I'd done on the previous two cover projects, I did my sketch digitally using separate layers for each figure. This is how that first sketch came out: 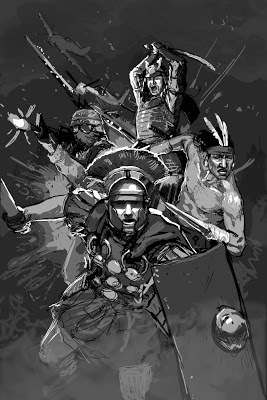 Sure it's a little rough, but it gets the point across and is consistent with the vibe set up by the previous two pieces. As you can see, I added a second Spitfire in the background and tried my best to flesh out the values. I submitted it and waited.

You may be wondering why I kept the various figures on separate layers. The answer is simple: people are prone to changing their minds. It happened on the previous two books, and this case was no exception. While they liked the overall feel of the sketch, they wanted me to replace Galvarino with Queen Boudica, and replace the Roman with a Greek hoplite. Old layers were turned off. New layers were created and doodled upon. 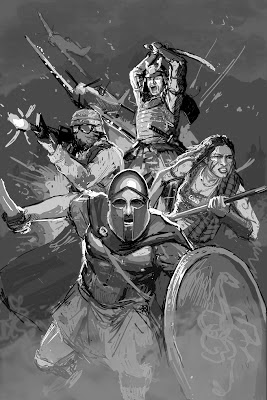 Obviously I stole heavily from the Roman in order to create the Greek, but Boudica needed to be drawn from scratch.

A quick aside about Boudica. I was asked to make her sexy and have her showing some skin — but not too much skin. This is a common request in the industry and it's one I have a difficult time with. I know that kind of thing sells, but I'm personally just not into eye candy. It's not that I can't do it, it's that I don't like to. Reconciling what I want to paint with what I know is code for heaving bosoms can be a treacherous path to negotiate, and my primary focus was making Boudica look and feel more warrior-like than anything else. I did my best to cover all the bases and I'm happy to say that in this case I managed to paint what I wanted to and still please the client. I wish more of my experiences in such matters had gone so smoothly.

Anyway, after the revisions, this sketch is what was eventually approved.

Now, as had happened in the previous books, I was given images of the cover's design. Obviously, it was my job to work out just how the figures would live within the confines of that design. I knew from the start that my image would need to fit in the bottom half of the cover under a very large title. Also, title would be neon green.

Yeah. In some respects this is a blessing. I know what I'm up against visually. I can figure out a color scheme that works with the green and hopefully helps tie things together. On the other hand, it was a really bright shade of green — one that was bound to dominate my painting. Fortunately, a suggestion was made early on that the image perhaps be heavy on the pinks and purples. While this sounds like an insanely bad idea, it actually did seem to work well with the typography. So, with plan in hand, I went to paint.

Here's how it came out. 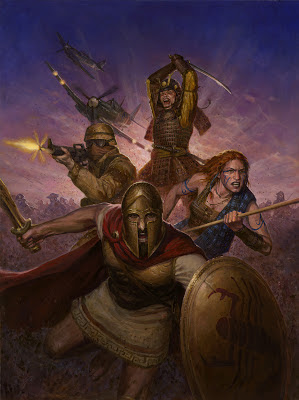 I was happier with the piece than I expected to be, honestly, and I was especially satisfied with everything that was actually going to be seen on the cover. (For reference that includes pretty much everything from the Greek guy's chest on up.) Still, there were some things that nagged at me that I wanted to fiddle with, so after a while I finally got the chance to go back into the painting and tweak some stuff.

Here's how it came out: 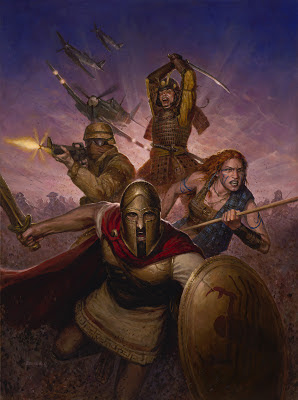 Most of the differences are subtle, but the major ones include a third Spitfire, some brighter highlights here and there, a larger sword in the Greek warrior's hand and a repaint of his legs. I also went ahead and signed it, which I'd forgotten to do on the first go around. The changes are really minor ones, but I felt like they made for a better painting. 'Course that's just my opinion.


The long and the short of it is that the Badass books have treated me well. I've enjoyed working on them, and I'm pretty amazed at just how well the paintings work next to one another. There's a pretty clear through-line and I'm pretty proud of that.

Incidentally, this piece will be making its debut at IlluxCon tomorrow. And while I'm plugging things, if it peaks your interest, you should check out the previous posts on all the various Badass projects (link), and maybe check out the site that's the source of it all, Badass of the Week, where you can read a bunch of cool stuff, find some info on the previous books, and maybe pick up a t-shirt or two.
Email ThisBlogThis!Share to TwitterShare to FacebookShare to Pinterest
Labels: Badass, Black and White, Digital, Illustration, Oils