I probably could have written several updates about this piece in the last couple weeks, but it would have been almost completely pointless given that the changes were redundant from day to day and concentrated in a fairly small portion of the painting. Essentially I've been repainting the face over and over again and have reworked it somewhere around ten times. However, I think I'm finally pretty close to where it needs to be at this point, so I figured it was actually worth throwing together this update. At long last. 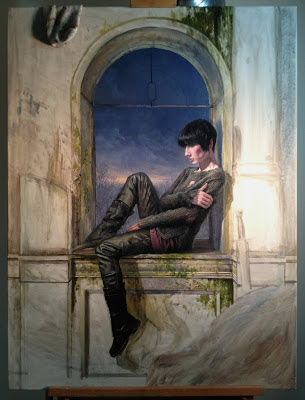 Admittedly this is not the best photo quality-wise, and I once again failed to eliminate my painting rag casually hung over the top of the canvas. Still, you get the idea. At least I hope you do. Point is, the clouds and environs outside the window are starting to come together, and as mentioned before, so is the face.

Buuuuuuuut that's about it.

Still, I'll give you another shot where the face is more prominent so as to highlight what I've spent so much time working on. 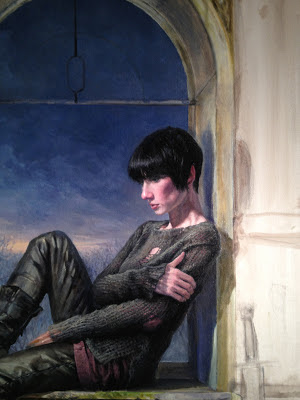 So, why was the face so challenging and why was it so important? Simple. I shot a model for this painting, and rather than using the model as an analogue of some generic fantasy woman, I wanted to achieve a decent likeness. Now, it's been a while since I've gone after a good likeness and I'd actually like it to be a decent one. With that in mind, while I may have had a serviceable face painted to this point, it was wrong enough for me to be bothered by it. But then, I know the model and have seen the reference. Long story short, she's a lot closer to what she needs to be for my happiness, so I feel like I can start to move on again. Unfortunately, I've got assignments and travel that will keep forward momentum to a minimum.

Anyway, that's about all I've got. I wish I had more to tell you, but alas I do not. Until next time....
Email ThisBlogThis!Share to TwitterShare to FacebookShare to Pinterest
Labels: Life, Oils, Personal Work