After completing the first piece for the MicroVisions show, I started the second and third. To change things up, I began both of these with at least a kernel of an idea. The second completed was the most heavily referenced of the three in that it ended up being based on a photo of a model I'd hired a couple times in the past.

There's really not much I can say about the process of this one, as there really wasn't much to it. I had the photo and I laid out the composition with the paint and went to town. It actually came together pretty quickly. The palette this go around was fairly limited again and was mostly alizarin crimson, pthalo green, a little payne's gray, yellow ochre, flesh tint (Windsor & Newton), Naples yellow and titanium white.

Some of you may have noticed that flesh tint was used both in this piece and the last. I'm not sure a whole lot of artists use the color regularly (if at all). That it's called "flesh tint" to begin with has always amused me as it's a pretty unnatural color to be. Were anyone's flesh actually that color, they should see a doctor immediately. Consequently, I rarely use it to paint actual skin. More often the not, it's something I mix into other colors, and is only something I use out of the tube in skies and clouds (though it finds itself elsewhere from time to time).

Weirdly, the first time I used both flesh tint and Naples yellow was after they were forced upon me by a professor during a figure painting class in college. Looking at my palette at the time and watching how I worked, he rummaged through his own supply and added them to the fairly limited range of colors I was using. Something clicked for me with both colors and they've made regular appearances on my palette ever since (though I have to admit that Naples yellow gets far more use).

All that being said, it's pretty likely that flesh tint did, in fact, find its way into the skin on this piece (though mixed down quite a bit). 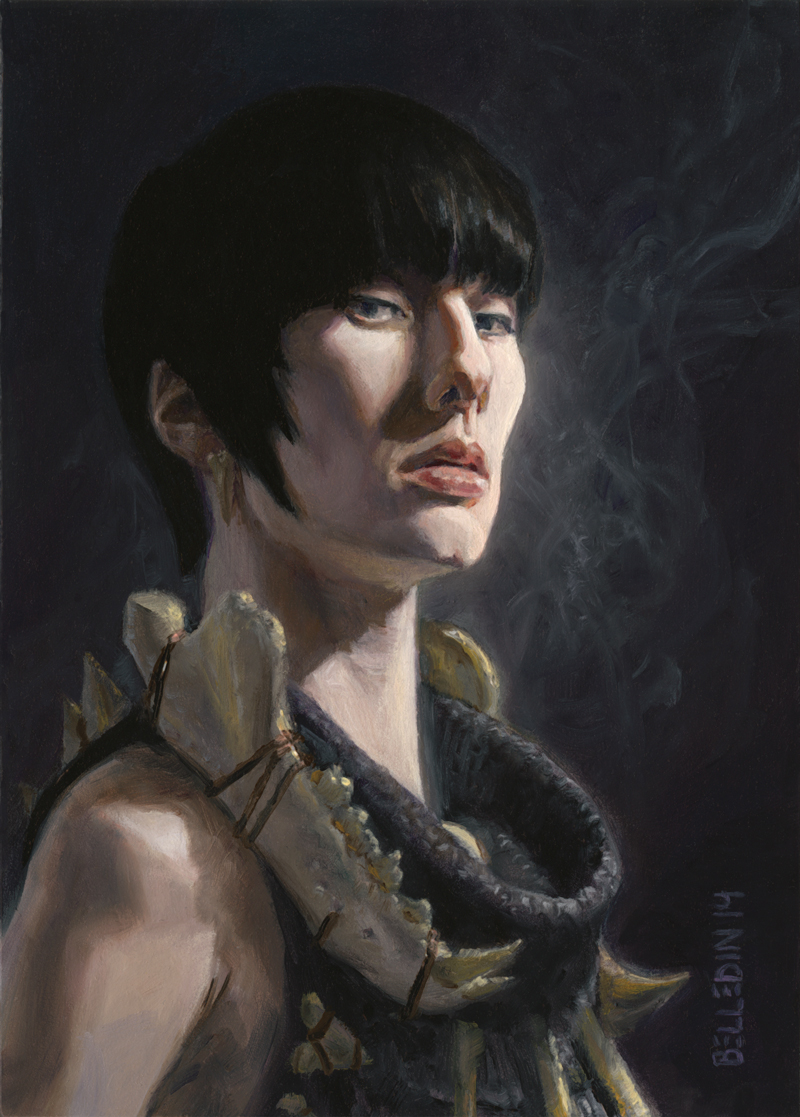 Looking at this piece in the context of the range of pieces contributed to the MicroVisions show, it's fascinating that many of the contributing artists chose to paint a female face or figure. I'm not entirely sure why so many of us chose that direction. Perhaps because we assumed it might sell well and raise more money? Perhaps because it's a subject we don't often get to do? Perhaps because it's been a recurring theme in art since antiquity? I can't really speculate much on the reasons why the other artists chose to go in that direction, but I know that all three of those factors passed through my head at one point or another while painting this piece.

When I passed my options along to the organizers of the show, this piece was not the one that was chosen, and again I was okay with that. I don't dislike it, either. The real problem is that I just didn't like it as much as the one that actually made the cut.

Next week, I'll talk about the third and final piece — you know, the one that actually is in the show. Speaking of the show, as of this writing (May 15, 2014), MicroVisions is still hanging at the Society of Illustrators in New York City and will remain there through the 24th of May. Might be worth a look-see.
Email ThisBlogThis!Share to TwitterShare to FacebookShare to Pinterest
Labels: Illustration, Links, MicroVisions, Oils, Personal Work