From Under the Floorboards

During Magic: the Gathering's first visit to Innistrad, arguably one of my more successful pieces was a little painting of a zombie called, Gravecrawler. At least I think so. Sure, it's horrifying. Sure, it's disgusting. Sure, it reveals how warped my mind can be sometimes. But, boy was I happy with how that one came out. The finished piece was about as close as I'd ever come to recreating what I originally saw in my head. So, when I was asked to do a new painting of zombies for Shadow's Over Innistrad, I was practically vibrating in place. Unfortunately the finish didn't quite make it to the level of Gravecrawler, but there's some fun stuff going on in From Under the Floorboards. And there's even a bit more fun that didn't make it into the card.

As usual, it all started with an art order:

Setting: INNISTRAD
Color: Black spell
Location: Some interior location with wood floors (see below)
Action: Some creeping vines have weakened the wood floorboards of an old mausoleum or church. The floorboards fall away, and out of the hole crawls three zombies. The zombies clamber their way up out of the rotten-wood pit, hungry for the flesh of the living.

Seemed simple enough, so I went to sketch and here's how that came out:

To a certain extent, I thought it would be fun to reference Gravecrawler in the central zombie. It wouldn't be an explicit tie-in and is by no means canon, but I was hoping to channel on some level a degree of the success I'd had in the previous piece. I got approval for this, and went to paint.

As I reached the middle of the painting process, for some reason I started to think about the description. "Three zombies," it said. While there were only three main zombies in my sketch, there were others insinuated. What if there was an explicit reason for there to be three zombies? What if it was part of the card's mechanic? I decided it was a good idea to shoot my art director an e-mail for clarification. It was a good catch. Three was the number we wanted to count to, with the number of counting being three. And so I eliminated most of the additional zombies, save one. The last I removed digitally.

Here's the piece as I turned it in.

There's a fair bit of digital trickery going on in the painting you see above. First, and most importantly, I painted out the one, additional zombie and added a bit of debris in his place. Second, I recognized that the vines were too thin to be legible at card size, so I fattened them up a bit. I was pleased enough with how these thicker vines came out that I ended up going back into the original painting to do the same. Overall, I was pretty proud of my ability to blend the digital with the traditional. But honestly, it wasn't that difficult a job to begin with. Either way, if the folks at Wizards noticed, they never said a word. In fact, they approved it as is.

Still, I really missed the zombie in the sketch whose head is just beginning to rise above the floor level. He's barely more than a shape, but there was something about him that amused me, and so I kept him. Here's what the the original painting looks like with that zombie still included:


The finished piece is twelve inches wide by nine inches tall and is oil on hardboard.

This was one of the most difficult pieces to color correct that I've ever painted. Seriously. It took forever. It's still not 100% right, but it's as close as I've been able to get with what Photoshop skills I had at the time. Upon rescanning the piece for this blog post, I took another shot at it and got a bit closer. So, I guess maybe my skills have sharpened a bit since last year.

If I had any complaints about the piece it's that it feels a bit murkier than I'd like it to. For whatever reason, I went darker faster than I usually do. In fact, it got dark enough that I'm fairly sure it wasn't really necessary to paint out the extra zombie at all. Seriously—he's hardly visible. The piece is dark enough, in fact, that I fear I may have undermined any figure/ground separation that might have helped the image read clearly when shrunken down.

Additionally, from a purely artistic level, this is a rare occasion where I feel like more would have been better. Zombies? More zombies! Debris? More debris! Let's just pile it on! Unfortunately, while that might have made for a more interesting piece to me, it would have failed to solve the needs of the assignment. After all, three was the important number here. Still, it would have been a lot of fun to paint even more zombies bursting out of that hole.

All that being said, I still dig the piece quite a bit. It's weird and fun, and pretty creepy. It's not exactly reinventing the wheel or telling any epic story. It's just zombie's busting out of the floor. But what fun it is to paint such things. Still more fun is that I'm never working on anything long enough to grow tired of it. One job is a mythical landscape, the next a mad scientist. Then it's on to zombies.

This gig can be stupid levels of awesome. 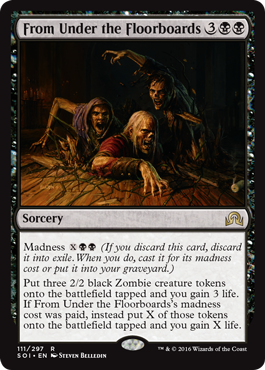