Some assignments require a lot of problem solving and a ton of revision. Other assignments simply don't. Aethertide Whale is definitely one of the latter, which makes it extremely difficult to write about. As much as I like to explain my decision-making and my thought processes, pieces like this don't really have a lot that bears in-depth analysis. Most of the decisions were made for me. While that may sound like a complaint, it isn't. It's just another facet of the job.

It's probably best to backtrack and start with the art description:

Art Description:Setting: KALADESH
Color: Blue creature
Location: The aether-swirled sky of Kaladesh (for aether reference, see p. 21 in the World Guide)
Action: Show a gigantic flying sky leviathan like the one on p. 128B (note the scale). In this shot, it swims through a small fleet of whaling airships (see p. 105C and D for ship profiles) that scatter to avoid getting smashed. The ships are tiny by comparison. All around are swirls of aether currents.
Focus: the sky leviathan
Mood: a creature completely in its element

Upon getting the assignment, I must confess that I was immediately taken back to my comic collecting days in the mid-nineties. Among the various titles I collected was Sam Kieth's, The Maxx, a comic which on at least one occasion featured flying whales—"air whales" if I recall. While I'm sure there are instances of implied or blatant flying whales in fiction before that comic series, flying whales will always remind me of that series. Well, that series and the whale from The Hitchhiker's Guide to the Galaxy.

Normally, when writing posts I remove references to World Guide page numbers in the descriptions whenever possible as they lack context. Since I can't show the pages and the designs upon which I base the illustrations, I feel that leaving such references in is a bit of tease. In this case I'm making an exception so as to be clear about what an assignment like this actually requires.

So, taking a second look at the description, we see that the aesthetic for the setting is indicated by images in the World Guide. There were several concept pieces from which to draw inspiration both on that specific page and in several other places throughout the guide and it was clear what they needed. As for the creature, that design too was pretty well established. The description was pointing to a full-color concept design that I stuck fairly close to. The ships were a bit less fleshed out and were just silhouettes on the page. As they were silhouettes, they contained no detail, just the broad strokes of how they should be shaped. There were, however, other ships in the World Guide from which to glean information. There was a little extrapolating to be done, but it mostly entailed looking at the other ships from the World Guide and applying design elements from those to mine all while retaining the overall shapes indicated by the aforementioned silhouettes.

With most of the elements figured out for me, my job was to take them and assemble them in a manner consistent with both the letter of the description as well as the spirit of the description. There was a bit of trial and error to make the image work, but in the end my responsibility was just to compose all of the things, toy with the scale, etc. In the end, I came up with this:

When building a digital document like this, I typically keep the various elements on separate layers so that I can move them around, hide them, and resize them as much as I need to. In this case, each ship represents a different layer, and the swirling aether (seen as the white streaks) is on three separate layers depending on where it is in space. The front of the whale is on one layer and the tail is on another. Once I've locked down a composition, I'll typically wait until the following morning to send the sketch off to the client so as to be sure the image still works for me. If not, I tweak it as necessary and then send it on its way.

Wizards gave me the green light with one requested change going forward: the Art Director asked that I change the shape of the lower jaw a bit. Super minor and easily done. I took it to paint and here's how it came out:

The finished piece is oil on gessoed hardboard, measures fourteen inches wide by eleven inches tall and was Art Directed by Mark Winters.

Despite being represented by white streaks in the sketch, the aether in Kaladesh is meant to be sort of an aqua color. As I painted the piece, I found that I was having difficulty keeping that color as vibrant as I wanted it to be. The aether tended to disappear into the sky and so I pushed it lighter in color to add more contrast, which only weakened the vibrancy of the intended aqua hue. Keeping the color of the aether was important to me, and so my best option turned out to be pushing the sky in a darker direction in order to allow the teal streaks to pop. Beyond that, there really weren't any struggles of note post sketch.

Jobs like this can sometimes be easier than others which require a lot of problem solving. I mean, there was relatively little for me to think about in this particular case, so what's not to like? However, sometimes these kinds of jobs can be far more difficult than others. After all, they are based upon pre-existing designs and frankly some designs are a heck of a lot easier to implement than others. Some designs or aesthetics don't mesh well with a given artist's sensibilities. Some designs are just plain difficult. And living up to the most difficult designs can be a huge headache and represent far more hours of toil to bring to fruition than something created from whole cloth. So in a way, they represent a problem solving as well. It's just a very different kind.

Fortunately, this time around it was just a whale, some ships, and some swirling aether. It's hard to complain about any of that. 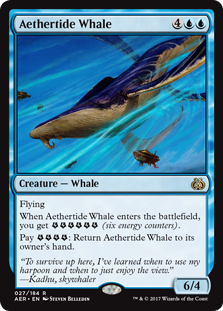