The Many Covers of Badass, Part 1

So, the art director called me and we hammered out the details.  With everything explained, I went to work.  The first sketch was terrible enough that I really don't feel good about posting it.  Suffice it to say that there were three historical figures in the piece and that they were stagnantly placed and the whole thing was boring.

So, they asked for changes.  They wanted it to be cooler and they reduced the number of figures to two, but added a tank and a biplane.  They also changed which historical figures I'd be using.  I gave it another go and the result was less stagnant to be sure, but was so poorly composed as to make me cringe.

They still didn't like it and I don't blame them.

At this point, I felt a little nervous.  I could almost smell the disappointment on their end and I was really worried that I might lose this opportunity if I didn't make a big leap next go around.  But as luck would have it, the situation got worse.

Around this time, HarperCollins (along with just about every major publishing company), was being forced to adjust to a weaker economy.  The publishing bubble had burst and the imprint that the book was intended to be published under folded.  As I'm just a lowly illustrator, I was not kept in the loop.  I heard nothing for a month, and was fairly certain that any chance I might have had was now gone.

Apparently, Badass was safe.  There was just a bit of wrangling necessary to figure out where it should be published, and what its time line should be.  And so, after several weeks of silence, I got an email from a brand new art director, with a brand new book design, and some brand new changes for the cover.  I'm not sure whether or not I might ever have been in danger of losing the job, but I treated this clean slate as a second chance and swung as hard as I could.

Now, I'm not sure how common it is, but the art director provided me with the book's design before I'd even done the revised sketch.  The book, overall, was very deliberately designed and they wanted me to fit my three figures into the space provided — a space with a very specific size and shape thanks to the placement of the the title and the author's name.  The disadvantage was that I didn't have quite as much free rein as I might otherwise have had.  The advantage, however, was that I now had a digital file of the precise layout of the book.  I could incorporate that into the sketch and make absolute certain that my piece would fit in the space provided.

Early on, I decided to do my sketches digitally knowing that they might change one or more of the figures (something that clearly turned out to be true).  By keeping each figure on a separate layer, I could easily eliminate one while keeping the other two intact.  This decision also allowed me to play with the proportions of each figure in relation to the others and fine tune my sketch with ease.

The new changes included eliminating the tank and biplane, but keeping one of the historical figures from the previous version, though upping the total number of figures back to three.  So, I sketched away, going for something that might begin to fit the book's name and design.  Here's what it looked like:


The art director took the sketch and popped it into the design and pitched it to the highers up.  Apparently they liked it enough to give it the green light and I moved on to paint. 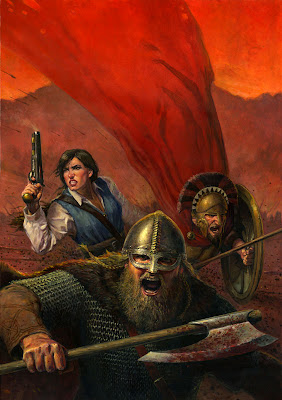 As you can see, it got a lot better after I shot reference and did my thing.  It was approved and after some digital manipulation went on to become the cover for Badass, by Ben Thompson.

I submitted the piece last year for Spectrum 17, and sent it in with a bunch of other pieces that I'd done for Magic which I was sure would have a better chance.  To my surprise, this is the piece that made it into Spectrum while the Magic pieces failed to make the cut.  Funny how things happen.  You can never predict what will end up tickling the fancy of any given group of people.  Had it been a different group of people I wonder if they might not have gone a different way.  But then, the dynamics of groups during the judging of competitions is a whole other topic.

So, you may be wondering why this post is called "The Many Covers of Badass."  "Many" implies more than one.  Indeed you are astute and correct.  It would come to pass that HarperCollins saw fit to publish a second Badass book, and also saw fit to keep the creative team in place.  Once again I'd be doing a few interiors, as well as the cover.  Once again, I'd be working with the same art director.  Once again, I'd be making changes.  But this time, I ran the gauntlet and lived to tell about it.
Email ThisBlogThis!Share to TwitterShare to FacebookShare to Pinterest
Labels: Badass, Illustration, Sketches, Spectrum