The Many Covers of Badass, Part 2

Part 1 of this tale appeared yesterday and can be found here.  Part 2 begins now:

I kept in touch with the author of Badass for a variety of reasons — not the least of which is that he's a super nice guy.  Only a few months after the first book had been released, he let me know that HarperCollins was talking about a second book and wanted to know if I was interested.  Silly question.  I liked doing the black and white interiors the first go around and the cover wasn't so much like icing on the cake as having a whole second cake!  I figured that even if I didn't get the cover of the second book, I'd still be pretty happy to do the work offered.

While the first Badass book centered around historical figures, this second one was to concentrate more on mythological figures, fictional characters, and urban legend types.  No matter what I ended up working on, I knew it was going to be a fun job.

At first, I was unsure of my return as the cover artist.  I wouldn't have blamed them from moving on to another artist, even given that the first cover had gotten into Spectrum.  I never look at any gig as a guarantee, as any number of variables exist within a given job that can sink it at almost any time.  I've seen jobs fall apart, imprints disappear, and whole companies do the same.  Illustration is not for the faint of heart, after all.  Nevertheless, I got an email from the art director about the job and I, of course, said yes.

This time around, in the opening stages the art director sent me an image of an old Star Wars poster that he wanted me to use as inspiration for the flavor of the cover.  The piece would have five figures total and would include the following: Thor (the mythological version, not the Marvel version), the Furies of Greek mythology (there were at least 3), and Godzilla.

Assignment in hand, I immediately set to work and produced two sketches.  One's composition was pretty much completely stolen from the Star Wars poster.  The second was somewhere in between the first sketch and the first book's cover.  I figured it would be a good idea to give him two different options.  It's a good thing I did.


As you can see, I went with digital sketches again.  Well, partially.  This time around, I did quick pencil roughs, scanned them in, then digitally painted over them, once again keeping each figure on a separate layer.  Pretty straightforward, I think.  These are exactly as I handed them in.

If I had to choose one, I like the first version.  Despite it's being ripped off of the Star Wars poster, I really dig the flow of elements in the piece.  It has a sense of movement and really takes your eye on a deliberate trip.  Plus, there's a sense of scale there that I really like.  While I don't dislike the second one, it certainly wouldn't have been my first choice.

As is always the case, they picked the sketch I wanted to do less, citing as their reason that it would read better as a cover.  They also decided to make some changes.  They asked me to flip the piece and to show more skin on the furies — two changes I was totally cool with.

The request to flip the piece was due to a design change which would require them to put text in the upper left hand corner.  It also got rid of an issue that tends to bug me at times and that is the left-handed weapon.  While there are certainly left-handed fighters out there in the world, I saw no reason that Thor should be wielding his hammer so.  In fact, I'm not entirely sure why I did it in the first place.  I guess I was just emulating what I'd already done in the first sketch.

The request to show more skin on the furies had two reasons, I guess.  One, the furies are often depicted nude which was a step too far for our purposes.  I had intended to have them in torn gowns but that was clearly a little too conservative for the likes of a Badass book.  And so, weird leather bikinis were in order.  Or something.  I figure the second reason was blatant pandering to the teen crowd. While, I'm not in marketing, it seems a reasonable enough assumption. 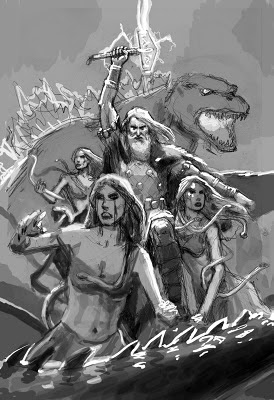 You know, it's funny how flipping a piece changes it.  I'm of the opinion that it really does work better this way.  But what do I know?

Anyway, this seemed like it might be the sketch that got the go ahead.  It had everything they'd requested (no matter how poorly drawn), and the art director was really stoked.  It seemed like the stars were aligning.

So, obviously it was time to put a kink in things.  One more change was requested: they asked that I replace one of the furies with Skeletor.  While the request was simple, the ripples it caused with the job were enormous and had me banging my head against the wall on several occasions.
Email ThisBlogThis!Share to TwitterShare to FacebookShare to Pinterest
Labels: Badass, Black and White, Digital, Process, Sketches