The Many Covers of Badass, Part 5

The inclusion of Godzilla and Skeletor into the painting was the cause of most of my headaches.  This was the reason I needed the contract changed, and the reason for most of the delays.  Still, I don't often get to work with established characters, and it was a really great opportunity.  That the extra effort and frustration caused by said opportunity was for naught, was a great lesson.

Sometimes these things happen.  Sometimes simple jobs turn out to be among the most complicated.  Sometimes, you find yourself banging your head against a wall and not knowing why.  I cannot begin to understand the things that took place behind the scenes at the publisher's offices.  While the art director tried to keep me in the loop, there were many things that I was understandably not privy to.  I imagine that there were battles fought and noses bloodied, my art director wielding an emergency fire ax to chop through the line of red tape baring foes.  Or perhaps the conflict took place in a series of increasingly passive-aggressive memos.  It's even possible that the massive delays the I experienced were the result of a spontaneous outbreak of the bubonic plague that resulted in the CDC secreting away those affected and allowing no contact with the outside world until the threat was contained.  In all reality, however, it could simply have come down to folks at the publisher waiting to hear from other folks who were waiting to hear from completely different folks, causing me to wait in turn.

Alterations to pieces are part of the game.  While rarely at this scale, it's something that we illustrators must all learn to cope with.  In retrospect, I might have gotten a little precious in this case.  It might not have been so bad to have painted over Skeletor.  In fact, I'm pretty darned happy with Professor Moriarty, who currently stands as the fastest figure I've ever painted.  Still, finding a way around the problem allowed for a totally different set of lessons I might otherwise not have learned.


To say that I have two fully realized paintings isn't quite accurate.  I have one fully realized painting that was the original version of the cover, and a second piece that is half paint and half exposed giclee.  In my spare time, I am trying to finish off the rest of that second piece and cover the remaining surface with paint.  I'm not sure if it's worth it, but it's an interesting exercise.  While I'm not trying to recreate the first piece brushstroke for brushstroke, I'm certainly trying to make it look pretty much the same, save for improvements here or there.  When it's finished, I'll have it shot just as I did the first one, and it will likely become the master image for my records and replace the image on my site.


To be frank, I doubt that the either piece will sell.  The first Badass cover certainly hasn't, and in both cases I'll be happy no matter what should occur.  Sure it's nice to sell paintings, but it's not the end of the world to me should I get stuck with them.  After all, I destroy the really awful ones and save only what's worth saving.  Both of these are safe and one will likely be displayed.  The nice thing is that I will only need to buy one frame for both pieces and will be able to rotate the two as tastes dictate.  So I have that going for me, which is nice.

At the end of the day, I offer some advice.  First off, when dealing with copyrighted characters, always make sure you're covered legally.  If the product you're working on is a licensed product, you should be good to go.  But, sometimes you're not covered, and it's important to get that ironed out.  Many companies include clauses in their contracts that indemnify them against something the illustrator might have done, but not the other way around, so be careful what you sign.

In this case, I protected myself from the start.  I always save important emails for each job so that I can document the client's requests.  While I wouldn't necessarily have been covered without the clause I added to the contract, I would have at least had evidence in my own defense.  At the end of the day, the change in the contract was rendered moot by the final change.  So it all worked out, I guess.

A second thing I want to point out is that you should always pay attention to any part of the contract that talks about changes and alterations.  Most of the time, contracts are written so that changes resulting from the client's actions pay (often a fee to be negotiated), while changes resulting from the illustrator's actions are done at no additional cost to the client.  However, some clients I've worked with allowed themselves multiple rounds of changes in the contract — both to the sketches and finishes.  These changes paid no additional fee.  So, again, read your contract. 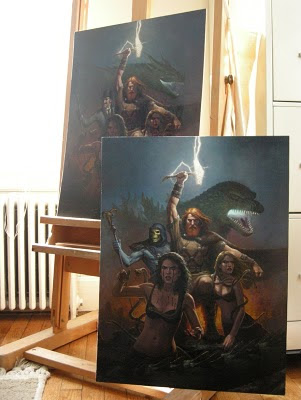 At the end of the day, I'm not complaining.  The author is cool, the art director is cool, the job itself is cool, it's just the situation that wasn't cool.  But every job is a gamble on some level.

Finally, a shameless plug.  The book is called Badass: The Birth of a Legend.  At least, that's what I heard it called most recently.  The author is called Ben Thompson and his website can be found here.  The paintings are called The Legend of Badass (v1) and (v2), after the book's original title.  The book is released this March 15th, and can be purchased wherever books are sold.
Email ThisBlogThis!Share to TwitterShare to FacebookShare to Pinterest
Labels: Badass, Illustration, Illustration Business