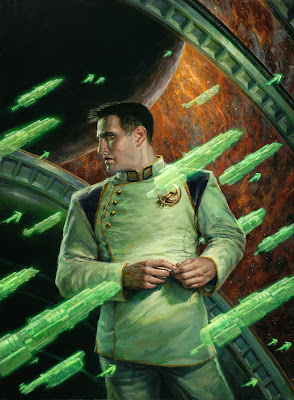 As Greg Manchess looked at this piece at Boskone this past weekend, he admitted to me that as I painted it, he wasn't sure I would be able to pull it off.  You see, Greg saw this piece come into being at the Illustration Master Class in 2009.

Greg was probably right to worry.  It was uncharted territory for me, and glowing holograms aren't exactly a cake walk.  Add to that the fact that my initial sketches for the piece were a disaster, and you've got real concerns.

Anyway, here are my initial sketches.

The first one is a pretty simple, solemn image.  The second, a pretty awful montage-y kind of ordeal.  I can't say that either one worked as is.  While the sketches were on the wall being reviewed, I began to race through a new sketch, hoping to get it done before I was called upon.

I really didn't like either sketch overall, but I thought that the diagonals of the holographic ships in the first sketch were salvageable.  I thought it important to keep the solemnity, but I felt that you should be able to at least see the main characters hands.  Here's what I came up with: 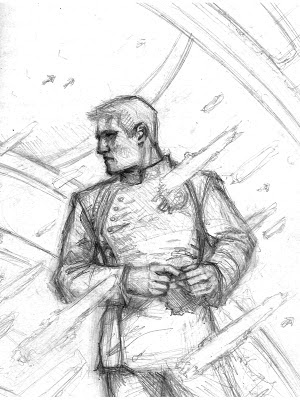 Obviously, this sketch is what I wet with.  Much prodding went on but with the week I had at IMC, I just couldn't get it done.  So, I completed the piece at home.

I assume that Greg had seen at least the finished piece online.  But I think this past weekend was the first time he'd gotten to see it in person.  That he was worried about the overall success of the piece doesn't shock me.  Nor am I angry in his obvious lack of faith (twists the knife...).

You see, early on I learned to face difficult pieces head on.  Even if you're out of your depth, you have to try and tackle the problem.  Collect the necessary reference.  Do some research.  Build models if you have to.  Get as prepared as you can.  Then, have at it.  Shoot for the moon.  If you fail, fail spectacularly.  And remember that it's better to fail because you weren't good enough, than to fail because you didn't try.

I remember someone asking my father how he did something or other.  The lack of context doesn't help, I know.  But rest assured that whatever feat this was in reference to was noteworthy (there are many tales of my father that are).  So after being asked the hows of it all, I remember my father replying that he was able to do whatever it was that he did because he was too stupid to know he couldn't.  If I'd been on the ball during my conversation with Greg, I would have quoted my father.

After years of tackling things head on, I've stopped worrying about whether or not I can do things.  Sure, I've failed along the way.  There are pieces that no one will ever see, and pieces I wish I could take back.  But every once in a while a step forward is taken, a leap is made, a job is done well.

As a complete aside, I don't want to make it sound like Greg Manchess is some jerk.  He's a really good guy, and someone I feel lucky to have gotten to know on any level.  He's easily one of the most giving people I've ever met.  Also, it just so happens that he has an excellent post over at the Muddy Colors blog about judging shows, and specifically judging Spectrum.  Check it out.

As a completely different aside, I fully recognize that the success of the piece contained herein is fully debatable.  That fact has been made very clear to me by a few folks out there (you know who you are).  It's entirely possible that I will one day burn this piece or give it away so I don't have to look at it anymore.  But, right now, I'm still pretty happy with how it turned out.
Email ThisBlogThis!Share to TwitterShare to FacebookShare to Pinterest
Labels: Digital, Illustration, Links, Oils, Sketches