The Many Covers of Badass, Part 3

While admittedly not a He-Man fan, painting Skeletor certainly wasn't a problem for me.  I was pretty confident that I knew enough to make him relatively cool.  I whipped up a new version of the sketch and did what I could.  I even tried to keep all three furies in there, because I'm a completist. 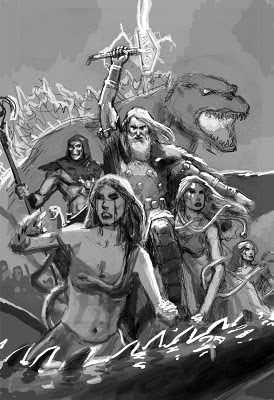 Painting Skeletor was certainly a minor change.  The real issue was one of copyright.  While I was excited to get a chance to tackle Godzilla and Skeletor, I didn't fancy the idea of being sued for their use.  It seemed wise that I should cover myself legally.  So before moving ahead, I asked a few friends for advice.  Everyone came back with the same thoughts and confirmed my gut instinct: I needed to make sure I was indemnified in the contract against lawsuits brought on by the use of copyrighted characters.

Fortunately, HarperCollins was totally cool with it.  I needed to add the necessary language to the contract myself, but it otherwise wasn't going to be an issue.  I have no idea whether or not they felt the clause was entirely necessary, but it seemed only fair that I be covered as Godzilla and Skeletor were being included at their behest.  It took a while to iron everything out, but it was better to be safe than sorry.

Time moved one, and the deadline began to loom.

Their response to the sketch above was positive, but they felt that my attempts to keep all three Furies in there was pointless.  They asked me to excise the tiny one on the right that I'd added, and gave me final approval.  Official green light in hand, I tweaked the sketch a bit for my own purposes, changing the scale of a few of the figures and cementing them all in their final positions.


I took this finalized sketch and removed most of the grayscale under painting, as well as the small fury on the right.  I then printed it out and pasted it down to a piece of hardboard.  After a day's worth of prep, the piece was ready.  I gathered up my reference, shot whatever I needed in addition to that then started slapping paint down.

Because of an assignment I was working on that required me to travel, I painted most of this piece in a hotel room.  I didn't enjoy the experience, and I don't recommend it.  I was never comfortable, and so the piece took a long time to really start flowing.  It could be argued that it never really did flow.  It was a frustrating piece to paint due to a variety of extenuating circumstances, and if I'd known what would eventually happen, I would have waited until I was back in my studio to work on it.

The short story is that everything about the job kept getting pushed back.  There were delays upon delays at just about every stage of the job.  I can't even begin to understand why, but it happened.  I figure I put more time into dealing with details than I did the actual painting, and the constant waiting got pretty frustrating.  I wouldn't go as far as to say it was a nightmare, but it was certainly among the most difficult jobs I've ever dealt with.  Such is the nature of the beast...well, this beast anyway.

Now, I want to take a minute here and point out that the art director I worked with was and is awesome.  He fought the good fight on my behalf, and I know this because he carbon copied me on almost every email he sent out dealing with the many issues I faced.  As much as he could, he kept me in the loop, and I can't tell you how rare and awesome that is.  Because of this, I never once threw a fit, or burst out in rage.  He was not the cause of any of the delays or problems that I had to deal with, and so was hardly deserving of any venom I might have spewed. 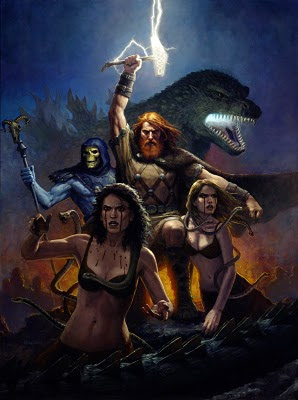 And here it is — this is the piece that I labored to produce.  It has its problems (I'm not 100% happy with Godzilla), but I'm still pretty happy with the piece.  In fact, I'm really quite proud of Skeletor in particular.

At the end of the day, I made my deadline.  The piece was finished, shot, digitized and was handed over.  The author, art director, and HarperCollins as a whole seemed pretty pleased.  However, throughout the months that followed the job, I had a nagging suspicion that it wasn't over.  I kept waiting for the other shoe to drop, and drop it did.

It seems that eventually, the question of whether or not Godzilla and Skeletor should be used was raised again, and the final leg of this trip began.
Email ThisBlogThis!Share to TwitterShare to FacebookShare to Pinterest
Labels: Badass, Black and White, Digital, Illustration, Illustration Business, Process, Sketches