The Many Covers of Badass, Part 4

If you've already read part 1, part 2, or part 3, you likely see where this story is headed.

After many complications and many months, I had finally completed the book cover.  The check came, it cleared, all was right with the world.  I moved on.  Then, last fall, the move to Boston became finalized, and it was clear that my world was going to be thrown into utter chaos for a time.  As I was preparing for the move, I finally got the email I'd been dreading.

As I mentioned before, the question of whether or not Skeletor and Godzilla should be on the cover came up again, and after much discussion it was decided that they should not.  Bummer.  I liked Skeletor.  Godzilla was okay, but Skeletor came out well!


The art director and I discussed our options.  The publisher's first instincts were to have me alter Godzilla and Skeletor's appearance enough that we couldn't possibly get sued.  This isn't an option I particularly liked.  First off, Skeletor and Godzilla are both actually in the book.  Folks reading it would look inside, see both of them, then look at the cover and think I didn't know what the heck I was doing.  Had I ever seen these guys before?  Since when is Skeletor red?  And why does Godzilla have a beak?  These are the types of questions that would invariably come up.

Second, changing those two characters to the extent needed to avoid legal action would result in me essentially painting two new figures.  I argued that if I was going to do that much work, they might as well be other characters in the book that no one will get sued for.  Fortunately, the art director agreed.

The next question became which characters should be the replacements.  Given Godzilla's size and placement in the piece, what replaced him had to be of similar scale.  Because I'd already done one for inside the book (seen here), I proposed a dragon.  They loved it.  Skeletor's replacement was up to them, as I genuinely had no idea who among the cast of characters included in the book would fit the bill.  They came back with Sherlock Holmes' nemesis, Professor Moriarty.  Cool.  I moved on to the sketch.

A major challenge with alterations on finished pieces is that they are impossible to plan for.  One hopes that all of the kinks are worked out on a given job before one goes to paint.  This doesn't always happen, but one can't exactly leave gaping holes in one's schedule in anticipation that it might.  One needs to fill one's schedule with jobs so one can eat and pay one's rent.

This is the situation I found myself in, and my schedule was full.  Further complicating matters was the minor detail that I was about to uproot my life in New York and drag it up to Boston.  Compounding those factors was that they needed the revisions done post-haste.  In fact, I had only three days to get them the sketch so that they could include it in the catalog they use to sell books to stores and distributors.  It was going to be tight, to say the least.

I went digital with the sketch again — this time opting to work directly on top of a black and white version of the painting itself. 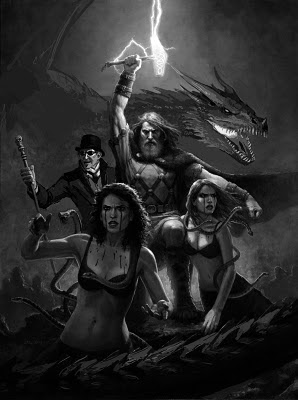 Again, pretty straightforward stuff.  They liked it and gave me the go ahead, but there was still a big dilemma to resolve.

When repainting much of a piece like this, one can go several ways.  One can paint directly over the original.  Or, one can just paint the replacement figures separately and blend it all together digitally.  I didn't much fancy painting over the original.  The big sticking point was Skeletor.  Unlike He-Man, I didn't want to destroy him.  At the same time, I didn't want to paint the figures separately because they'd lack a certain amount of context, and I feared that I'd need to do an awful lot of digital manipulation to make them fit into the piece color and value-wise.  I talked with a few other artists and came to a third solution: I had a giclee print made of the original cover, pasted it down onto a piece of hardboard, and did the alterations on it, rather than the original painting.

This meant that I'd have all the context of the original piece including the correct palette, value structure, and composition.  It also meant that for better or worse, I'd end up with what amounted to two original paintings.  Given the increased amount of room my new home had to offer, this wasn't much of a concern.  This option was the closest thing I could think of to having my cake and eating it too, and I'm glad I went this route.  It may not have been perfect, but having the image there saved me a lot of time on the back end and time was of the essence.

To complete the job, I would have a week at most, depending on how quickly I was able to get my studio unpacked and in working order.  As it turned out, that took far longer than expected, and I had only a few days.  So, I disappeared into my studio to paint the dragon and Moriarty, scan the piece, retouch it, and hand it in.  The deadline made, I went back to my regularly scheduled job, and eventually celebrated Christmas. 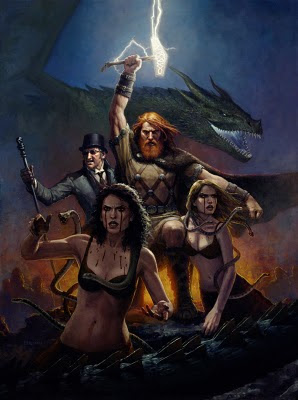