Defang was quite the opposite scenario from Fervent Cathar, which I wrote about yesterday. It was assigned and painted concurrently with that piece, but it was one I had very few doubts about and one that I attacked with some degree of confidence. Here's the art order I received:


ART DESCRIPTION:
Color: White spell
Location: Village setting
Action: Show a vampire that's been taken prisoner by two human soldiers (see "Shake" styleguide pg. 58-64 for devil reference). The vampire's arms are bound so that it can't claw anyone. Also, its lips are pulled back in a sneer-- and we see that its big canine fangs have been removed. The vampire shuffles along in bondage, resigned to its fate. (We don't have to see much of the human guards in-frame; just show enough to tell the story of the vampire's imprisonment... just body language should be enough to sell it)
Focus: The neutered vampire
Mood: A dangerous evil that's been rendered harmless.

Looking back it's interesting that they didn't actually want to show the teeth being pulled. Also interesting is the fact that I didn't work up that alternative, nor did it occur to me at the time to do so. Considering how the piece came out, I don't think I could have made the piece quite as iconic had I depicted that scenario, anyway. What I imagined instead, was this:

Here's our vampire in irons, being muscled through a dark space, lamps hanging directly above, motes of dust whirling in the shafts of light.

I'm not sure why, but I immediately associated the space the vampire finds himself in with the bowels of my grandmother's barn, a space I was never officially allowed in. I remember seeing it once or twice, each time accompanied by my father. I remember it was cool and dark, the light unable to reach the entirety of the room and describe it fully, leaving pockets of mystery throughout. I'm not sure, but I think the space was intended for cows or some other livestock, and it was subdivided into stalls. At least I think it was. Truth is, I kind of like the fact that it's still a mystery to me. That part of the barn evokes much more than memory and I'm happy to keep the blank spaces in place. The one thing I do clearly remember about it was the smell. Decaying wood, rotting hay, rust, mildew, with just a hint of leather and oil. That coupled with the blood is what I imagine the vampire is smelling as he's guided to his final destination.

It was also due to this weird association that I designed the hand restraints the way I did. They're inspired by a straightjacket, a dog muzzle, and horse tack. A leather harness which fastens at the waste and has shoulder straps that cross at the back is put on the victim. Though I didn't depict them, I'd imagine this is all reinforced with groin straps, as well. Attached to this harness are leather straps that buckle repeatedly around the arms all the way down to the wrists where wrought iron cages riveted into the leather work keep the hands from opening fully. These cages are then locked to iron loops bolted or riveted to the harness at the chest, thus restricting the victim's arms to a position most associated with someone laid to rest in a coffin (at least that's what I was trying to suggest).

You know, I put a disturbing amount of thought into that...

Anyway, back to the sketch. I turned the above sketch in and got some notes back. There was a concern that the lack of teeth wouldn't read well when reduced to card size. This was a very valid concern.  So, I cropped in and reworked it a bit. Here's the second version:

Cropping in eliminated the escorts, so I put their hands on the vampire's shoulders instead of around his arms. Also, because of the concerns with readability, I got rid of the vampire's tongue. I was worried that it would visually clutter the mouth and make it that much more difficult to discern what was going on. I resubmitted with this sketch and it was approved with one final note from the art director in which he urged me not to be afraid to mess the vampire's mouth up even further — maybe a few broken teeth or something. I told him I'd consider it and went to paint.

So here we have the final, it's oil on paper on hardboard, and measures 12"x9".

I set out with two things in mind when I began painting this piece: I wanted there to be sympathy for the vampire, and I wanted the shock of red to be the only bright color in the piece. I'm not sure whether I accomplished the first, but I managed to restrict myself color-wise to pull off the second. I imagine how much sympathy the viewer feels likely is connected to how they feel about vampires in the first place.

Astute viewers will note that I ignored the notes that the art director, Jeremy Jarvis, gave me. The four front teeth are still intact. The truth is that I mulled his suggestion over in my mind the entire time I worked on the piece and decided that I'd paint it as I'd sketched it the first place, then mangle the mouth from there. But when I reached that point, I found that I couldn't actually bring myself to do it. The piece was disturbing enough, I didn't want to make it even more so. Still, I knew that the image as it was wouldn't be enough for someone who's seen just about every horror film ever made and can give you the plot summary of every one of them. So, I decided to create two other mouths digitally, so that Wizards had three to choose from. In Photoshop, I painted one with broken teeth, then another with no teeth. Here's what they looked like:

Now, I've looked at a lot of disturbing stuff on the internet in order to find reference for Magic paintings. Some of the stuff I had to look at to achieve this piece proved to be truly cringe-worthy, and likely cemented my place on some sort of watch list being kept by some agency somewhere or another. I'd say it's worth it, but that's just me. I suspect that Jarvis would agree. He went with the broken teeth. 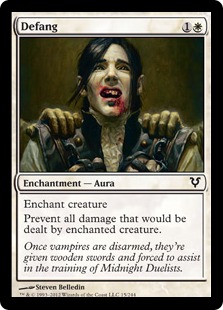