So here it is, the last image I did for the world of Innistrad, and it's a weird one. How so? It involves a strange subject, an odd design, and a different palette for me. But before I get into that, let's take a look at the art order first:


ART DESCRIPTION:
Color: None (Artifact creature)
Location: Outside an alchemist's shack
Action: Show a walking, attacking creature made from wood, leather, brass -- and weapons. It's an alchemist's guardian, built from scraps around the laboratory, designed to keep intruders out. Maybe its arms are melee weapons (like those on pg. 46 of the "Shake" styleguide). Instead of a traditional head it has a glass jar set into its chest, inside which is somebody's formaldehyde-preserved head (to give it a slightly creepy, Gothic horror vibe). See pg. 71 for examples of alchemist's inventions -- now turn that style into something that can walk and attack.
Focus: The alchemist's minion
Mood: An awkward-looking contraption, but it'll crack you a good one if you get too close.

Examples of the melee weapons mentioned can be seen throughout the Innistrad block (link). For the most part, they're very true to the original designs — many of which were drawn by Steve Prescott. Steve was also responsible for most of the alchemist invention designs mentioned in the description, however, the various artists who'd extrapolated upon those designs in their illustrations had done so in ways that I personally had no clue about, not having seen the fruits of their efforts until recently. So, while I based my designs on those in the styleguide just as they had, I was generally in the dark as to whether or not my designs felt consistent with what they had done. I just had to trust that the art director would nudge me in the right direction if I was too far off.

To be sure, looking at the description, it's a strange one. I was basically being asked to create a magic robot made of mostly organic materials that was being powered by a decrepit head in a jar. Mechanical devises and robots designs are territory I'm very uncomfortable with because my own sensibilities are rarely in keeping with what folks are typically looking for. Still, I had to figure out where to start and where to take the piece, and after rereading the description many times, my mind began to drift toward tractor shows I'd been dragged to as a kid.

What's a tractor show? Think car show, but with tractors. All makes and models, some as small as modern riding mowers, some as large as trains.  At these shows, the ones that created the biggest impression on me were the ancient, steam-powered tractors that had all sorts of belt-driven attachments for doing things like splitting logs and such. They were noisy, dirty, ghastly affairs that, while often times enormous, had engines that contained lots of negative space and were clunky to say the least. Many were ugly machines that clearly had been built solely with function in mind or were from a time before form was even taken into consideration.

With Steve's designs and the weird parade of tractors crawling through my mind, I began to knock out a design for this thing, all the while trying to figure out how it might function. To what does this chain connect? How was this arm driven? Where should this belt attach? After much fumbling, I came up with this sketch:

To call the machine strange is fair. To call it ugly is, too. While it wouldn't work mechanically, it looks like it might to some extent, and given that it's Magic, you have to assume there's some ethereal force at work, as well. Either way, it's an odd looking thing, and while it has clear connections to the designs that Steve put together, I was really uncertain just how well it meshed with the set as a whole. Happily, I was reassured by the the art director. "Heh," was all he added to the automated approval email. From there it was off to paint.

Before I get to the finish, let me take a moment to comment on the odd (for me) palette. As I've said before, I don't typically do color studies. This piece was no exception. What's weird, though, is that I drifted toward a palette that was dominated by colors I typically think of as supporting players rather than stars. While I can't exactly account for why this came together as it did, I'm happy that I went along for the ride as I did, as I gained a new appreciation for a oft forgotten portion of my palette in the process.

The original is oil on paper on hardboard and measures 12" x 9".  And here it is as a card: 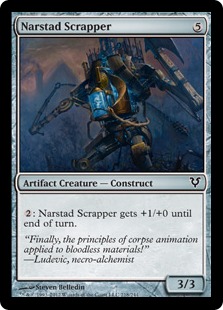 Narstad Scrapper just feels off to me. Not bad, just off.  It felt odd while I designed it, odd while I worked on it, and even now feels like a weird blip in my work to me. Even odder is that of all the pieces I submitted to Spectrum 19, this is what was accepted. This isn't a complaint, mind you, I actually find it fascinating that the judges saw merit in this piece — merit enough to put it into the book. Would I have chosen this piece over others I've done over the last year and submitted for consideration? Probably not, but I'm tickled that this piece made the cut, all the same. If nothing else, this piece is pure gut. It's a shot from the hip. And its a nice little oddity that will likely hold a place in my flat files for years to come.

As an aside, this piece, along with many others will be on display this coming Friday, Saturday and Sunday (May 18, 19, and 20, 2012) at the Spectrum Fantastic Art Live exhibition in Kansas City, Missouri. You'll find me and my work in booth 604. If you're in the area or are planning to attend, by all means come by and chat me up if you're inclined to do so. If nothing else, it'll be an awesome show to behold. Until I return, I will likely maintain radio silence on this blog, but if I have the time to put up a blurb or two, I'll try to do so.
Email ThisBlogThis!Share to TwitterShare to FacebookShare to Pinterest
Labels: Digital, Illustration, Magic, Oils, Sketches, Spectrum