Syndicate Enforcer is about as straightforward a piece as one can get, really. There really are no interesting facts to share other than that it was the first piece that I painted after I moved to New Jersey. I remember that the house was just barely unpacked when I finally started it, and I remember feeling very odd sitting in the new studio. Still, the sketch came together pretty easily after receiving the following art order:


ART DESCRIPTION:
Color: Black creature (Orzhov guild)
Location: Behind a shopfront in Ravnica, or some other out-of-the-public-eye location in the city
Action: Show an Orzhov enforcer, a kind of well-paid thug that comes to bleed people of their hard-earned wealth. He's human and dressed in dark Orzhov armor like the knight on p. 137A (Ravnica world guide), but instead of a helmet or faceplate, he wears a hooded cloak over his armor. He looks strong, merciless, and mean -- the perfect Orzhov extortion-bully. Perhaps he's stalking off (toward us) with a coin purse, after having roughed up his victim (in the background, maybe a stunned Ravnican elf is slumped against a stone wall -- but don't draw focus from the thug himself).
Focus: The Orzhov enforcer-thug
Mood: One of the many criminal jerks who keeps the power structure of the Orzhov running "smoothly"

The first thing that came to mind after reading that description was the image of Billy Dee Williams walking down a dark, smokey alley in shots from one of his Colt 45 beer commercials from the 80's. To some reading this, that will seem like a pretty obscure reference, but I suspect there are some of you who will know exactly what I'm talking about. Of course, I have no idea why the image of Mr. Williams walking down that street all cool and collected with his trench coat blowing in the wind was the mental leap I made, but I accepted it and went with it. This sketch is the result:

There's a part of me that wishes I'd translated the images I remembered from those commercials more literally in terms of composition, but I'm not unhappy with how that sketch came out. And neither were the folks at Wizards. They approved it.

Before I move on, I need to provide a little back story for those who aren't completely up to date on their Magic lore. This piece is set in Ravnica, which is a plane entirely covered in city — kinda like Coruscant in Star Wars, only with no Jedi and fewer diners. Within this city, ten guilds vie for control. Each of these guilds draw power from two of the five environments in Magic (plains, forests, islands, mountains, and swamps). Each of these environments has a corresponding color associated with it (plains are white, forests are green, islands are blue, mountains are red, and swamps are black). The central figure of this image — as mentioned in the art order above — is from the Orzhov Syndicate, which draws its power (or mana) from the plains and the swamp and so is associated with the colors white and black.

Black and white are awesome. Except when you're trying to paint a full-color piece. As such, over the years, those images associated with white and black cards have had to expand their color repertoire a bit. Yellow has joined white to help represent the plains and purple has joined black to represent the swamps. And so it was that I came to the rather easy decision that this piece would be a play between yellow and purple.

Boy that was a very long-winded explanation.

Anyway, I went to paint and stuck to my intentions pretty closely. Except that I didn't. Well, not entirely. The problem was that I wasn't completely satisfied with the straight yellow and violet palette. I found I liked it better when I introduced more orange and brown into the mix. On the whole, it felt more visually congealed. So, once again, I went with it, and here's how the piece came out:

The painting's the usual oil on paper on hardboard and measures 14 inches wide by 11 inches tall.

Before submitting the piece to Wizards, I ended up removing a bit of red from the image in order to make it a much straighter yellow and purple image as initially intended.  I thought it would work better for their purposes. But the image above is pretty accurate to the painting.

At the end of the day, I rather like this piece. It's not pushing the envelope in any way, and it's not really a think piece, but it tells a story and provides a decent level of atmosphere. I think it does exactly what it's supposed to do. 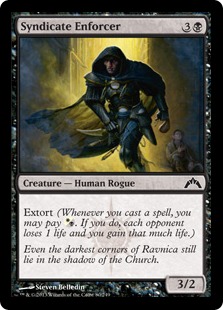