Art-wise, I have not had a productive couple weeks. I've been dealing with tax stuff and life stuff, yard stuff and house stuff. There's been some Spectrum Live planning in there too, not to mention time spent fretting and thinking about all manner of things. The last couple of days, though, I've finally started getting things together on this piece.

While I already admitted that I've not gotten as much painting time in as I'd like, I wasn't entirely slacking. There were a lot of logistical decisions that needed to be made for this new painting. The most important of these decisions was how large I was going to paint it. I settled on (for some reason), a twenty-inch square. This size ended up being rather convenient as it allowed me to try out a new surface which happened to be available at the correct dimensions: Dick Blick's Studio Birch Wood Panel.

Truth be told, working on a wood panel would be pretty much identical to working on hardboard. The only real difference would be the preparation of the surface. Typically, my surface preparation is fairly limited. I tend to usually work either on board that already has gesso on it, or I paste a piece of watercolor paper to the board's surface and seal the whole thing off with matte acrylic medium. This go around, however, would require the same steps I'd normally have to take were I working on canvas. First, I'd need to use some sort of sizing (in my case PVA sizing), then follow that up with the usual three or four coats of gesso.

Applying the sizing is a pretty straightforward process. It's got the consistency of watered-down Elmer's white glue and is easy to smear around the surface. The gesso, on the other hand, was a little more difficult for me. When gessoing a canvas, there's a texture to work into. It's relatively easy to see whether or not the coats are reasonably even by how visible that canvas texture is. On smoother surfaces, however, I've found it harder to see where the gesso is building up. To combat this, I usually have a lamp pointed directly at the side of the board so that the light rakes across the surface and reveals the contours of any lumps.

In between each coat of gesso, I did the usual light sanding to knock down brush marks and to further combat any gesso lumps. Still, despite my best efforts, the gesso did not go on as evenly as I'd hoped. My solution? I set my brush aside and bought a four-inch painting roller. The roller did a much better job of keeping the gesso coats evenly spread, plus it added a very fine texture that I quite like. I like it so much, in fact, that provided the texture doesn't create too many problems in the digitizing process, I'll likely be using the roller from now on.*

The process of sizing and priming the wood panel took a few days and required a couple additional days of drying time. When it was finally ready, I did a simple graphite transfer of my sketch onto the surface and sealed that under a simple underpainting of dioxazine violet.

I let that dry and then did a first pass over most of the surface. 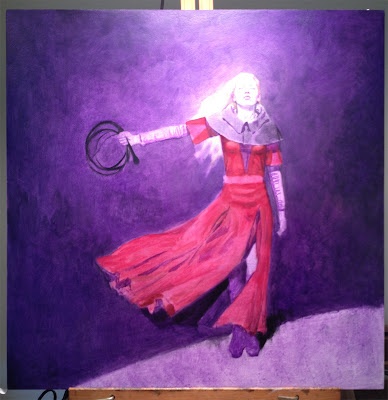 The photos all were a little blown out. In fact, a lot blown out. Which is why I took an additional shot. 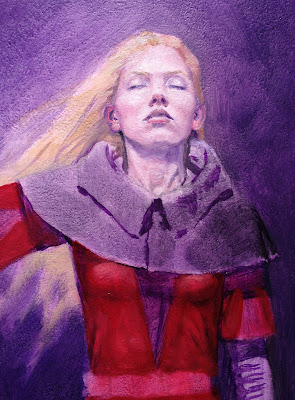 I guess it's fair to say that I'm a little inconsistent when it comes to starting paintings. Sometimes I build the whole thing up to a certain level and then start systematically finishing things. Other times, I'll just start finishing things straight off the bat. In this case, I kind of got lost in the face. I knew that a lot depended on getting the face to feel right, and so that's where I initially concentrated my efforts.

At this point, I'll probably leave the face alone for a little while and attempt to bring the rest of the figure up to that level of completion before really giving it (and the rest of her) any real polish. Plus, you know, there's the rest of the painting that needs some attention. I mean, she's got an environment around her, and all. I should probably look into working on that, as well.

In order to get all that done, I should probably get to painting. So... yeah. Off I go...


* Notes: In art school, I was taught that the proper way to apply gesso was either with a brush or a large palette knife. Rollers were strictly verboten. While I see why you wouldn't want to use a roller on stretched canvas, I honestly don't see why you should be able to use one on a board. I say, use whatever it takes to get the job done and gives you results that make you happy.

Secondly, the use of a roller has been a stock joke used by my father-in-law for as long as I've known him. He continues to be endlessly entertained by the notion that I, as a painter, should use one. I have to confess that I felt a little irritated that the years of joking ended up being prophetic in any way as I walked out of my local hardware store with roller in hand. I'm sure his response to hearing that I have finally caught on to the roller's qualities will be something like this: link.
Email ThisBlogThis!Share to TwitterShare to FacebookShare to Pinterest
Labels: Carelss Juja, Illustration, Oils, Process