The instances of people actually picking up a phone to hire me have been rare. In fact, I think it's only happened once in my twelve years as a full-time freelancer. The rest of my work has come via emails or through one-on-one interviews. That my most recent job became the second time a telephone was used in order to commission artwork is just weird. But then, the whole job is kind of weird. But a really good weird. The best kind of weird there is, actually.

The task handed me was to create art for Careless Juja's third album. I must confess, I've never heard of this musical group due to the fact that they seem to have recorded music more recently than the mid-90's. But musical taste and knowledge were happily not an issue. What mattered was that the man on the other end of the line knew what he wanted and was insanely flexible. Even better, I wasn't being hired because I was some artist who happened to fit the bill. I was being hired because he actually liked my work and wanted me, Steven Belledin, to paint something. Told you it was weird.

The great thing about all this was that the phone conversation was simple and straightforward. This is what I want on the cover of my album filtered through your sensibilities and here's what I can offer for that. The offer and the job itself were absolutely my cup of tea, and what's better is that I really needed some new work that I could hang on my wall at Spectrum Live this May, so it was very well timed to boot.

The assignment was simple: a moody portrait of a woman inspired by the character Sonia Belmont from the Castlevania video game series. I was left to interpret that as I pleased.

Once again, my ignorance spilled forth as the last time I played a Castlevania game, the protagonist was called Simon Bellmont and I had to blow into the cartridge to make the darned game work. But this lapse in knowledge wasn't an issue, either. Without even asking, I was supplied with a brief synopsis of Sonia's role in the Castlevania franchise, as well as a bunch of images from the more recent games for my consideration.

Looking at those images, I have to confess that I was a little worried. The reason for this is that the games take place between the 15th and 18th centuries, but the costuming more closely resembles what one might find in a modern pleasure dungeon. It's not authentic in any way and, quite frankly, there's more skin showing than is practical. While that started to set off some degree of alarm, I was assured that this was the opposite of what was needed of me. In fact, my most recent Badass cover was what brought this client to me, and he appreciated the fact that I'd managed to avoid any unnecessary sexualization of the image's only female character. The supplied art was merely a starting point to be accepted or ignored as I saw fit.

Whew. Told you he was flexible.

I took the provided reference and I set it aside for the time being. Then I went about doing research on era appropriate fashion, which in this case was European clothing from the mid-15th century. Very early on, it became clear why the concept artists behind the games abandoned any attempt at historical accuracy. Simply put, clothes from that point in history aren't exactly cool looking. So what does one do when faced with this dilemma? Easy. One makes stuff up.

A little pulled from this era, a little stolen from that era. Sprinkle in some elements in keeping with the tone of the reference, and throw in a touch of a knight's surcoat. Top it all off with a London hood, and bam! Just as out of place as the aforementioned reference, but much more in keeping with my own sensibilities.

This is how the thumbnail came together: 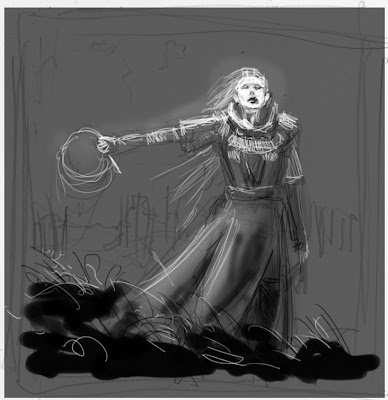 There she stands in a field of brambles lit by a flash of lightning, holding her whip.

While this did get approved, I though it a good idea to show this thumb to some friends and the consensus seemed to be that having her stand in deep grass made her feel short and took away some of the elegance I might otherwise achieve. My concern with pulling her out of the grass was that it might begin to feel that she was standing in front of a backdrop more than existing in a real environment. But on the other hand, I couldn't argue the shortness. At the end of the day, I ended up stealing heavily from their advice and put it all together in this sketch: 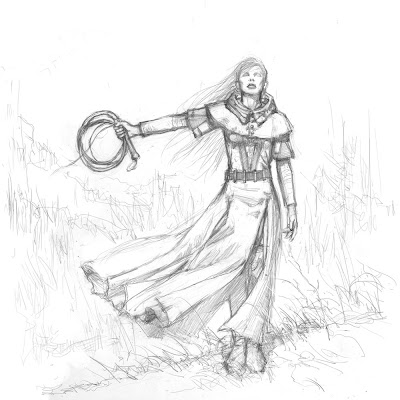 To be sure, my concerns aren't really addressed here. But I kind of don't care. Besides, so much can change when paint finally starts hitting board. Fleshed out volumes and the establishment of space can change a piece drastically, so I'm going to move forward and see where it leads. If my concerns bear fruit, perhaps a solution will present itself along the way. Or not.

So this is about where I'm at. I've got a 20"x20" wood panel prepared and the drawing is transferred. I'll be doing some acrylic painting to seal the drawing and kill the white space. Should be an interesting ride.
Email ThisBlogThis!Share to TwitterShare to FacebookShare to Pinterest
Labels: Black and White, Carelss Juja, Digital, Drawing, Illustration, Process, Sketches