Here we are, at the fifth and final day of Badass week. So Steve, you're probably wondering, of all the interior illustrations you did for Badass: Ultimate Deathmatch by Ben Thompson, which was your favorite? It's a happy coincidence that you all were wondering such a thing as that's exactly what I planned on writing about today! Without further ado, here is my favorite interior: 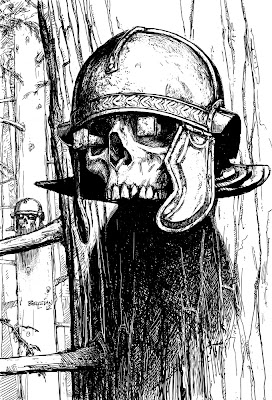 I know, I know. Skulls and death again?

I remember overhearing a high school classmate of mine looking at some paintings I had up at my alma mater some years back during an alumni art show. I actually don't remember which pieces they were, but I can at least tell you that they were thematically similar to my typical fare. "Well," my former classmate said, "it's got blood in it, and it's about death, so it must be one of Belledin's."

At the time, I found it pretty jarring to be summed up in such a way. I mean, I wasn't thrown into some sort of existential crisis or anything, but having my work so neatly encapsulated kind of left me a little disappointed. Nowadays, I'm not bothered by it. Most of the blood and guts stuff that I've done just happened to have been assigned to me. I don't ask for such assignments, but I'm not in the habit of turning them away, either. As is the way of the business, successfully completing such assignments to the satisfaction of the client inevitable leads to similar work. When painting for myself, such horror imagery is not what I gravitate towards at all. Sure, there might be death lurking just under the surface, but if extrapolated to its furthest extent, to show something alive implies death anyway, so I essentially can't win.

The point I'm really slowly driving toward is that the subject matter is not the reason this is my favorite interior of the lot. The reason for my favoring it is also not because I think it's the best piece I did for the book (though it arguably is). I like this illustration the most simply because it came closest to living up to my initial vision. After working through the thumbnails then moving on to the finished sketch, I had a clear idea of what I wanted this piece to be. The end result got pretty darn close to that idea. Extremely close, in fact. It's a rare piece that I see through rose-tinted glasses.

Is it a creepy piece? Yup. Is it kind of messed up? Indeed. But I'm happy to say that this isn't an idea that came out of my head for a change. It's an idea that came out of some other guy's head long, long ago in the Teutoberg Forest. While I just happened to be the one chosen to depict it, that guy made it a reality.
Email ThisBlogThis!Share to TwitterShare to FacebookShare to Pinterest
Labels: Badass, Black and White, Digital, Drawing, Illustration, Pen and Ink, Random Memory