I'm still amazed that the Badass books fell into my lap the way they did. What started out as the promise of interior black and white work for the first book has yielded so much more, and I'm grateful that it came together for me in such a way. Tomorrow, March 12th, the third book in the series arrives in stores. That's right, folks, you can own another bit of Badass with Badass: Ultimate Deathmatch, by Ben Thompson.

While I detailed the bits about the cover art a while back (link), I thought I'd share a few of the interior pieces this week in celebration of the new book's release. But first, I want to talk about a decision I made in regard to these interior illustrations.

If memory serves, I did five interior illustrations for the first book. Being an oil painter, it seemed natural that I paint these pieces in oil. I did the same thing for the second book, where I initially did six interior paintings. With this most recent book, I agreed to ten paintings. Now, I'd toyed with the idea of making these pieces digital on the previous books, but my instinct was always to try and paint them digitally. I never actually followed through, however, as my digital skills aren't what you'd call... good. Then, towards the end of the second book's production, a last minute illustration was required and I was asked to quickly put something together. Time was limited, so I agreed to do the illustration provided they would accept pen and ink instead. This wasn't a problem, the piece went out on time and everyone seemed pretty happy with the result.

With this third book, I was faced with a challenge. When I accepted the ten pieces, my schedule was wide open and all seemed right with the world in our Massachusetts home. As the deadline grew closer, and it became clear that our lives in Massachusetts would be turned upside-down resulting in our being dumped back into the New York metro area again, I suddenly found the timeline to be rather compressed. Given my previous experience with the interior illustrations on the other books, I knew exactly how much time I was going to need to accomplish ten paintings, and I had less than that. So, with the permission of the author, I decided to do half the pieces in pen and ink.

But then I got to thinking about things a bit, and I revised my plan slightly. Due to the potential for changes or edits (mostly of my own making), I decided to go with digital pen and ink instead. The time this decision bought me was crucial, and I was able to turn everything in on time. Thus far, I haven't heard a single complaint about the end result, either, so I guess I did okay.

Anyway, here's a digital pen and ink I did for the War of Arauco chapter of Badass: Ultimate Deathmatch. 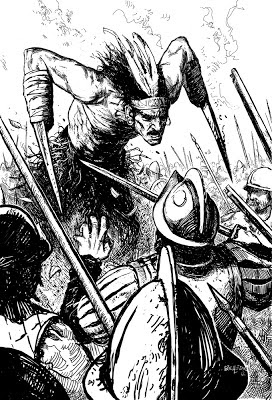 If you want to find out about the War of Arauco as well as many other amazing conflicts throughout history (and laugh a lot while learning about it all), then you should probably buy the book. Just a suggestion. 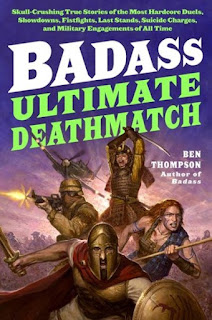 And here's a link to the author's website where you can find out more: Badass of the Week!
Email ThisBlogThis!Share to TwitterShare to FacebookShare to Pinterest
Labels: Badass, Black and White, Digital, Drawing, Illustration, Pen and Ink