Yesterday I stated that I decided to go digital on the five pen and ink interiors for Badass: Ultimate Deathmatch in case changes needed to be made (link). Well, if there's a piece that exemplifies what I'm talking about, then you need look no further than this one. 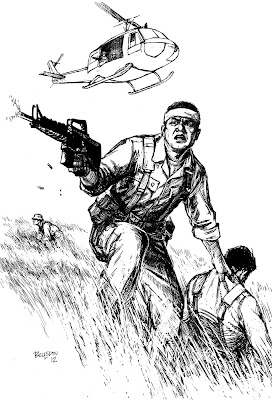 Sure, it may seem innocent enough, but this portrait of Master Sergeant Roy Benavidez took the longest of the lot. By far. Why? Well, I ended up doing this one twice. This was a classic case of first piece started and last piece finished. Essentially, as I completed each piece, I grew dissatisfied with this one in particular and ended up scrapping all but he head of the first version (though even that got quite a revision). I'm happy I did, too, as this one is quite an improvement over the original.

Normally I'd show you what that first version looks like, but after digging around on two hard drives, it looks like I failed to save that the piece in that state. All I can tell you is that the drawing was terrible and that there was a lot more line work muddling the piece visually. When redoing the piece, I ended up leaving out much of that stuff resulting in a much cleaner image. It could be argued that the result is too clean, but I'm happy with it nevertheless.

Anyway, if you'd like to find out about Master Sergeant Roy Benavidez's exploits and learn what makes him such a badass, you might want to pick yourself up a copy of Badass: Ultimate Deathmatch by Ben Thompson, which just happens to have been released today!

And hey, if you don't like what you've seen of the work I've done for the book, maybe you'll want to pick it up for the illustrations done by these other awesome artists:

And if you're still not sure you want to buy it, maybe another look at the cover will convince you. 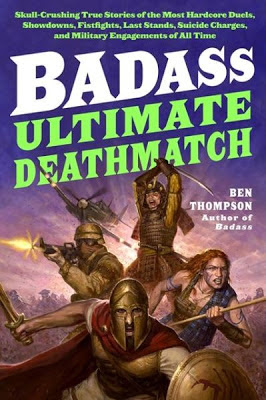