Here's another interior for the newly released Badass: Ultimate Deathmatch that I painted in oils. As was the case with the piece I posted yesterday, this piece is also more atmospheric in nature. 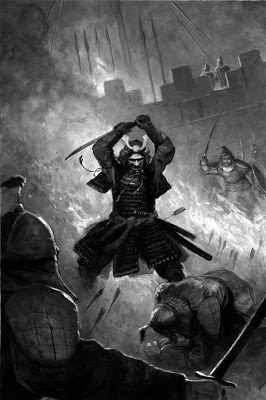 Here we have a painting of Kono Michiari that is done on illustration board that measures 8" x 12".

It's funny to me that I got picked to do this piece. One might have guessed that Brian Snoddy might have been assigned to it given his extensive knowledge of samurai and the fact that he actually owns authentic samurai armor. While my own knowledge isn't completely lacking, I don't have as much confidence in it. I suppose that's why I instinctively came up with a scenario that called for so much of the composition to be cloaked in shadow.

This reminds me of a similar circumstance I heard proposed by a comic book artist when I was a kid. The artist — whose name I cannot recall — was talking about human anatomy as it applies to superheroes and suggested that those folks who weren't confident in their anatomical knowledge might want to consider utilizing a superhero's cape to cover up as much as necessary to get the job done. I'm a fan of this concept, though it should be noted that shadows and cloaks aren't always being employed to disguise or conceal an artist's shortcomings. Sometimes it's just the right thing to do for that particular piece.

Sure, this one's a dark piece, and I'll admit to wanting to conceal certain details in the samurai's armor, but the shadows I've employed are just as much about the mood and reinforcing the lighting scenario that I've chosen.

Anyway, there you go. If you want to learn who Kono Michiari was and have a good laugh while doing so, or if you want to see other illustrations I did or the illustrations done by the other fine artists who contributed to the book, then I encourage you to go ahead and get a copy of Badass: Ultimate Deathmatch by Ben Thompson. You know you want to.
Email ThisBlogThis!Share to TwitterShare to FacebookShare to Pinterest
Labels: Badass, Black and White, Illustration, Oils