This is an image I am unhappy with. That's my feeling about it in a nutshell. I've flip-flopped several times on whether or not to even blog about it given that I would prefer to downplay this piece's existence. But over the last couple weeks I've concluded that sharing the thing is very much in keeping with my warts and all approach. I consider this to be a "wart" much more than an "and all," so I will share it with you.

So, why do I feel the way I do about this piece? Why is it a wart? Well, it's an image I didn't really want to paint. It's the kind of thing I've done before but is something I feel like I've done enough of. It's a straightforward image of torture and pain. While the context provided by the Magic card it's printed on might provide depth in the form of symbolism or metaphor, to me the image itself provides no such thing. It's just a guy burning. I wish I did something different.

I've looked for the art order for the image, but I must have deleted it accidentally. But if memory serves, I was asked to depict a man consumed in blue flame with half of his face burnt off revealing the skull beneath. I also remember that they specifically wanted to be sure that the man's head was almost exactly half skull and half flesh, but asked that the delineation between the two not be a neat, straight line. That's about all I recall.

It's not a very complicated assignment, really. It also happened to be an assignment that I had no desire to paint. Still, I moved forward. I figured I'd give them what they were asking for and would just bang it out quickly and be done with it. This is both a bad attitude and a bad idea.

I should have tried to think of a different idea that I was more interested in painting. I should have taken the time to explore new concepts. I should have talked to my art director in order to find out if there was a way to make us both happy. But I did none of these things. Instead, I did this sketch: 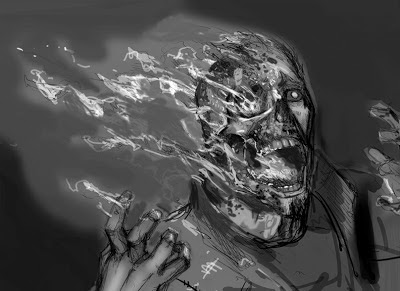 There will undoubtedly be people reading this who don't see the problem. And believe it or not, there's part of me wondering the same thing. This is just another horror image. Horror is horror, right? Well, yes and no. To me, this is more torture than horror. It's a depiction of gore and violence. While that that certainly can be an aspect of the horror genre, I much prefer the tension and mood side of things. I find the latter more intriguing and I feel that it tends to look better on a wall.

This is not to criticize those who prefer the gore and violence, however. I get it. That's your thing. It just happens to not be mine, it turns out. You can like your red velvet cake. I'll keep my chocolate.

The biggest problem with accepting working on something I'm not into is that the time spent painting it becomes agony. The hours are filled with loathing and frustration, and I've found over the years that I end up prolonging the whole process. At the best of times I'm pretty good at avoiding starting my day of painting. When I don't like what I'm working on, I become an expert. Productivity drops to a crawl, thus extending my unhappiness. And so it was with this piece. 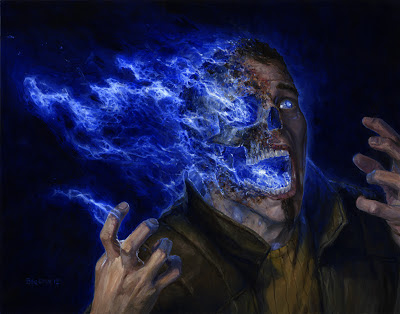 Obviously, they approved the sketch and this is how the finish turned out. It's oil on paper on hardboard and measures 14" x 11".

Looking at the piece as objectively as I can, it's by no means the worst thing I've ever painted. It's not even the worst thing I've ever painted for Magic. But I'm still pretty dismissive of it. A good friend of mine has always been fond of saying that not every piece is a portfolio piece. There are many reasons that this is true. It could be that a given piece falls short of greatness or is just not the kind of thing you want to represent you. Or it could just be that you plum don't like the thing regardless of quality or subject matter. For me, this is not a portfolio piece. It falls short of greatness to be sure, but as I've already stated, it's more to do with not liking the subject matter.

Additionally, I keep coming back to the fact that, whether any of us like it or not, our work represents us to a certain extent. Depending on the person and the circumstances, that fraction of the audience may be correct. Or they may be dead wrong. I know that not every artist thinks about their work in such a way — there are certainly folks who just paint whatever they're asked to, and indeed there are even folks who depict things that endorse ideas that contradict their own beliefs for the sake of a paycheck. I can't and won't say whether I think that's a good or bad thing. That's a judgement call each of us may have to make over the course of our careers. I can only speak for myself, and it turns out that painting stuff like this makes me feel kind of icky. I don't want to feel icky. And so I guess I'll be actively avoiding work like this in the future. Or, you know, will try my best to mold assignments like this into something that is more in keeping with the imagery I'd like to create.

Still, clearly this painting turned out to be important. I learned quite a bit about myself and my artistic needs from it. Plus, after rethinking the project long after it was done, this piece inspired the seed of a personal piece that I hope to paint someday. So I guess it was a net gain in the end.
Email ThisBlogThis!Share to TwitterShare to FacebookShare to Pinterest
Labels: Digital, Illustration, Magic, Oils, Sketches