There's been a lot going on in the house and I've been delinquent in posting as frequently and on as a diverse a group of topics as I'd like. Instead all I've been able to muster is a smattering of closer looks at Magic pieces. But even in this I've fallen short since the piece I'm about to write about came out in September.

So, Lantern Scout. Yeah. Not a lot of controversy, not a hugely difficult process, and not a lot of issues along the way. In fact, it was about as straightforward as things go. As always, it began with an art order:

ART DESCRIPTION:
Setting: ZENDIKAR
Color: White creature
Location: Guul Draz
Action: Show us a female human scout moving through a murky geyser field in Guul Draz. She has a short sword in one hand and a glowing hedron-lantern in the other, lighting her way through the swamp. Behind her, we can make out the shapes of two other humans following her light--perhaps only indistinctly through the steam of Guul Draz.
Focus: The scout with the lantern.
Mood: She's a light shining in the darkness.

Edited from the above are specific page numbers from the styleguide that included specific reference for the scout's clothing, as well as the landscape of Guul Draz. If I'm honest, descriptions such as this that require me to take something from one part of the styleguide and place it in an environment found in another part of the styleguide can be a bit boring. After all, there's little ownership and a bit less creativity, as well. In this case, however, I was fortunate in that all the styleguide reference was vague enough to allow a great deal of extrapolation. Even if it hadn't, the image they were looking for is the kind of thing I really enjoy painting, so off the bat I started in a good place and was looking forward to digging in.

As luck would have it, the same day I got my assignment, I had a model over for an unrelated project. At the tail end of our session, however, I took the opportunity to take a bunch of shots of her holding a lamp to try and nail down the scene for the painting that lay ahead. This was the opposite of how things typically go, mind you, since I normally do at least a thumbnail sketch before committing to shooting reference. But taking the photos felt worthwhile—especially if they prevented me from having to paint myself yet again.


Not surprisingly, I could have used the game plan that a sketch would have provided. As I explored the scene in sketch form, it became clear to me that the photos I shot with the model would end up being less helpful than I'd hoped, and so I lit the scene and struck a pose and then used my maul stick to pull the trigger on the Photo Booth App (ahhh, technology).


The end result was sort of a melding of both bits of reference along with a bunch more stuff thrown in (thank you Google Images). Anyway, this is the sketch that resulted:


And here is the finished piece:


The painting is eighteen inches wide by fourteen inches tall and is the usual oil on paper on hardboard.

While I stated above that the creation of this piece was pretty straightforward, there was one thing that did cause a bit of a hiccup. While painting the piece, I failed to step back often enough and take the piece in from afar. The result of this negligence was that the scout's proportions became slightly off. As soon as I digitized the piece and was able to reduce it at will in Photoshop, it became quite obvious. So I ended up tweaking things in Photoshop before submitting the piece. After that, I spent an additional day working on the painting to get it to match the digital file. Mind you, the necessary tweaking wasn't a big deal, but I admit that I was a little irritated with myself because I knew better. Or thought I did.

Still, aside from that small, last-minute issue, the piece was about as straightforward as I could make it and it ended up being one of my favorite pieces I painted in 2014. If nothing else, I managed to nail the mood I was going for, and I was quite pleased with the more limited palette I went with to get there.

So yeah, another one that I don't hate. What is happening to me? 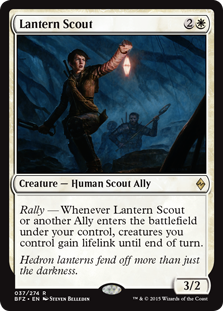