I use the word "straightforward" a lot when describing the process of illustrating for Magic: the Gathering. One could argue that I overuse the word, and I guess one might be right. The truth is that to a greater or lesser extent, the job becomes a bit routine. The assignment comes in, I put a sketch together, I hand the sketch in. If there are any changes necessary, I make them and resubmit the sketch. Otherwise, if I've gained approval, I spend a day or so to prepare the surface of the board or transfer the drawing (or both). Then I paint the piece, digitize and retouch it. Finally, I submit the digital file to Wizards. On average, within a week after the completion of an assignment, the process begins all over again.

Based on the history of this blog, one would be correct in saying that I often struggle with pieces. However, that's not always the case. Sometimes I'm lucky enough to get assignments that just fit into the pattern and schedule, and don't ever cause me a whole lot of grief. Such images come together easily enough for me to not feel guilty about enjoying my life at night and on weekends instead of toiling away on a piece. You know, sometimes a piece is just... straightforward. This was one of those times. As always, we begin with an art description:

ART DESCRIPTION:
Setting: ZENDIKAR
Color: Red creatureLocation: underground cavern
Action: In this shot, we are looking up at three Dark Dweller goblins (see p. 109) crawling head first down a semi-cylindrical vertical cave shaft toward us. The goblins are sightless. The shaft is crisscrossed by a network of climbing ropes installed by unseen human adventurers. The shaft is lit from below by off-camera torches. We should get the feeling that these goblins are stalking someone.
Focus: the goblins

After getting my assignment, the first step in my process is always to start doing exploratory thumbnail drawings. While many of my fellow illustrators make beautifully composed drawings contained in perfectly drawn boxes, my thumbnails are a scribbled mess and rarely start in any kind of frame. The struggle for me is always to get poses and mood down first. Only after figuring out a direction for those things do I begin to compose the piece as a whole. In this case, I quickly found that I had a great deal of difficulty with the part of the description about the "semi-cylindrical vertical cave shaft." I don't know why, but I couldn't find a compelling way to sell that part of the image while keeping a satisfying hierarchy of the goblins receding into the distance. Without a doubt, there are artists who could have easily nailed this off the bat (and Karl Kopinski subsequently did a much better job of it in his version of the art), but it was a weird obstacle that became something I got hung up on.

The thing is, one can't dwell for too long on details like that as the deadline is ever marching closer, so I set that issue aside and decided to first attempt to make a piece that I found satisfying and then see if I could make that cylindrical tunnel thing work. The short version is that I decided on a piece that I liked and never got the cave's shaft to feel particularly cylindrical. Still, I thought the sketch was strong enough to submit and hoped that the fine folks at Wizards really meant it when they wrote in the description that the focus was the goblins themselves, rather than the environment they were crawling through.

As stated in the description, the design for these guys was already set, so I was basically finding a way to make them work in a new context. While I think Wizards was probably thinking about more of a Gollum vibe, I kind of was thinking more of an "Alien" vibe. In the end, I think it came out somewhere in the middle.

Anyway, they dug the sketch as is and I got approval. But rather than go to paint right away, I did something I rarely do: a quick digital color study.

Satisfied with where I was headed, I prepared my painting surface and went to town.

The final painting is the usual oil on hardboard and measures sixteen inches wide by twelve inches tall.

In the end, I don't have a lot to say about this piece other than that I'm satisfied with how it turned out. It wasn't particularly complicated in subject, concept, or delivery, and it was a pretty quick turnaround due in no small part to the simplicity of the color palette and the size of the shapes involved. Truthfully, if I could change anything, it would be that the walls would be covered with goblins, but the assignment was to paint only three. While it would seem like Wizards would be happy to get more for the money, that's not always the case. This is a game that I'm illustrating after all, and there's a high probability that any specific numbers mentioned in an art description are tied to a game mechanic in some way — not always, but often enough to have been an issue. So, as in this case, I often go the conservative route and deliver what they ask for. Beyond there not being swarms of goblins, however, I'm pretty content with how it came out.

So that's it. Another piece down. And here it is in its card frame: 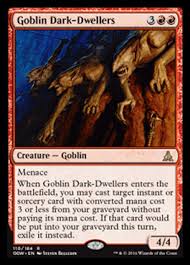